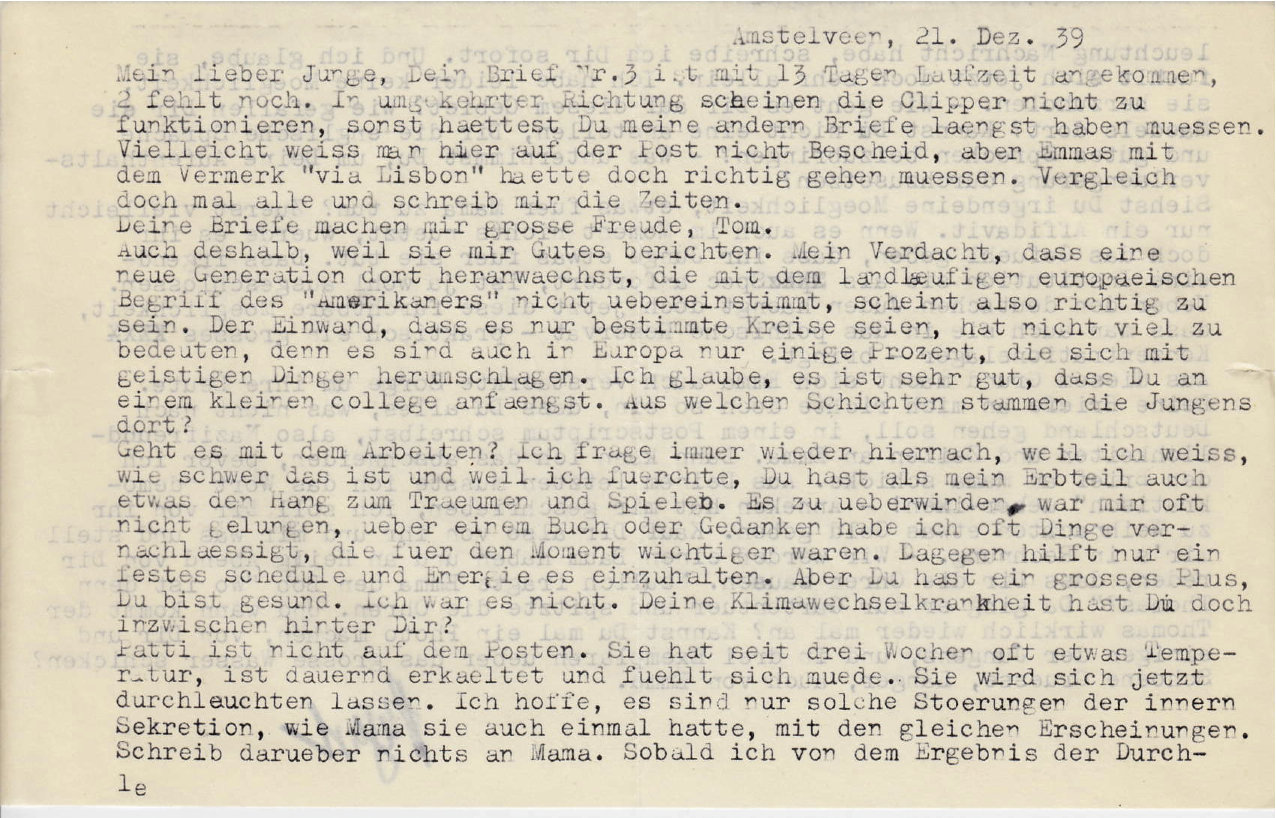 My dear boy,
Your letter No.3 arrived it took 13 days No.2 is not here yet. In the opposite direction the Clipper transport does not work so well, otherwise you should have my other letters by now. Perhaps the postal service here does not understand, but Emma’s letter marked Via Lisbon should have gone all right. Compare all of them and inform me of the times. Your letters give me great joy, Tom.

Also because they report about good things.
My suspicion that a new generation is growing up there which does not fit the typical European idea of the “Americans” seems to be correct. The objection that is so only in certain circles does not mean a lot, because also in Europe only a percentage is willing to tackle intellectual matters. I believe it is very good that you are starting in a small college. What is the background(family, education) of the boys there?

How is the job going? I am always asking about that, because I know how hard it is, and because I worry, you inherited from me the urge to dream and play. It can be overcome, which I did not accomplish often, over a book or daydreams, I have often neglected things which were important at that moment.

Against that only a solid schedule and energy to carry it out will help. But you have a great plus, you are healthy, I was not.

Are you over your change-of-climate illness by now?

Patti is not feeling well. For the last 3 weeks she had a raised temperature, always has a cold and feels tired. She will be x-rayed. I hope there are only disturbances of inner secretions, as Mama had once with the same symptoms. Do not write to Mama about this. As soon as I get the x-ray report, I will write to you immediately. I also believe that now she really feels alone. Sadly enough I do not have any possibility to bring her here.

How are you doing in your area? How do you like the girls there? Can’t you enlist one to teach you the English language and good speech?

What are you doing to push through your resident permit? Do you see any chance to do something for Mama? At first maybe just some kind of affidavit. Even if at this moment it would be of no use, it would give her the feeling that her boy is doing something for her. That perhaps some institution would request her as a SPEC (I am not sure what that means, maybe it had something to do with her occupation), must now be impossible.

Over the German Jews now lurks the horrible possibility to be taken to the Polish Reservat, in realty a large concentration camp. For that reason Emma is also very worried about her people.

Anneken wrote to me, I should send you some money for Christmas. So buy yourself something from her and me and put in on my bill.

We will have a tree and on Christmas Eve talk about you to make your ears ring.

The other day Emma asked Bob (the dog) “where is Thomas?”. He went to the garden gate and his ears stood up. And when is Thomas really coming back???

Could you take a photo of yourself and some of the other boys with 2 additional copies and send them across the big water?

I have to thank August for giving me a little insight into what he and Opa must have talked about, or at least what their letters discussed. August alludes to something Opa wrote by mentioning that the new generation of Americans are not what Europeans expect. I’m guessing that this is a response to Opa’s first observations of Americans. In his letter to Gisela, he wasn't overly impressed with Americans. In fact, he thought they were kind of dim. As an older adult, Opa had a very positive outlook on Americans- in his memoirs he spoke about learning new things about Americans that he did not expect: students working through college (Phil Myers in the ice truck), and the co-ed environment of college (which he enjoyed). But this is all retrospect- written from a relaxed and comfortable view. What were Opa’s first impressions of America?

I am reading “An American Quaker Inside Nazi Germany,” a book by a Leonard S. Kenworthy, who traveled to Berlin to work with the Quakers for a year, starting in 1940. Kenworthy talked about the importance of journaling your first impressions as soon as you arrive in a foreign place: “I learned that it pays to jot down notes about a new locality in the first few days of a visit. Otherwise those early impressions are lost as differences seem to disappear and the uncommon becomes the common.” I wish so much I could have read more of Opa’s first impressions. We are lucky that we have his letter to Gisela, which I think are his most honest and non-censored letters.

So the Americans- August alludes to only a certain percentage in Europe that are willing to tackle intellectual matters as sort of an excuse or justification for what seems like a similar opinion of Americans and their intellectual pursuit.  I have to take some of this with a grain of salt, and a dose of self-awareness. I believe that the Doeppner gene has a hint of intellectual snobbery. There, I said it. Tackling intellectual matters is something I really enjoy doing. And so do many folks in my family- at varying levels and in varying subject areas. But ultimately, there is an understanding (at least that I recognize) that if you refuse to tackle any at all- if you are content just as you are without struggling with the deeper, darker questions, or harder problems, then you are somehow less.... not working your noggin hard enough. I confess- I have this as a foundational prejudice ingrained in me. I can get around it- but it’s my knee-jerk reaction. I wonder if the optimism and down-home feel of some of these farming Kansas folk really caught Opa’s intellectual spirit off-guard.

Maybe this is what August warned of- that daydreaming part of him that he knew Opa inherited, but hoped he could beat. I understand this. That part of us that enjoys the spinning mind, thinking about things that may not have immediate importance, but has a global focus and huge ethical importance (to us). I daydream- and it gets me into trouble. I struggle to live in the present sometimes because my mind is so consumed with larger thoughts of world struggles that are really beyond my capacity to influence any difference. But I like to try. I think the world needs all of us- the daydreamers and the needle-threaders. All daydreamers need to learn a thing or two about work, and workers need a lesson in dreaming.

I think my Dad also has this ability to daydream. When he was looking at colleges, he says his choices came down to journalism and the Air Force Academy. While he was interested in journalism, I think my Dad was convinced by the solid promise of a military career as an officer with earning potential and free tuition offered by Uncle Sam. How can I blame him? I went the daydreaming route, got my undergraduate in Philosophy, Masters in Divinity, and by economy’s standards- I don't have huge earning potential. In a perfect world we would find a way to both create (daydream) and produce (work).

I went off on that track a while.... sorry.  Back to the letter. August spills the beans on Patti’s illness, probably worried and finding solace in sharing his worries with Opa. I think it’s kind of perfectly family-like that they decide to keep it from Ella. It's cheeky, but they know Ella worries so much already.

The part where August asks if Opa has any girl that can teach him English. SUCH a male Doeppner thing to say. Trust me on this one. It’s like the humor got passed down with a box of witticisms for practice. I had to check to make sure my Dad didn't write it in somehow. Eerie how similar the humor is.

August then turns to a more serious topic: Ella’s escape from Berlin. August has given up any hope that he can bring her to Holland, I’m not sure why- perhaps it’s more about the relationship with Emma than ability. I feel like that wouldn’t stand in the way if it was the only thing though... He encourages Opa to try to get the affidavit- even if only to give Ella hope. August alludes to the concentration camp, although even he won’t know exactly what goes on there. He calls it the Polish Reservat- is that Auschwitz? The fact that August already hears rumors and has a pretty good idea of what that place really is- is scary and interesting. So many people chose to ignore the evidence.

Then August mentions how they must be careful what they write because of the Nazi censors. Which reminds me- we have found the censor stamps (if you look at some of the letters, you will see red stamps with numbers on them). These are basically Nazi censors who opened and read every letter sent back and forth. Wild. So each “approved” page was stamped. I’m trying to dig up some more information on these censors and stamps so I can do a little spotlight on it, or let Jason do one. If you have any information about these red squared number stamps- please comment and let me know. Resources are greatly appreciated! Jason and I are reading a few books to continue our research of this time and we welcome suggestions from others who have found good resources.

SO even Bob, the dog (how hilarious is that name?!), is looking for Opa’s eventual return.
Posted by Sarah Snow at Thursday, July 30, 2015