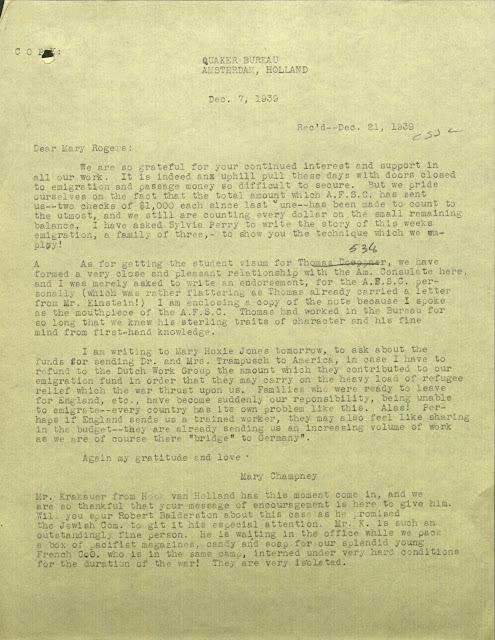 We are so grateful for your continued interest and support in all our work. It is indeed an uphill pull these days with doors closed to emigration and passage money so difficult to secure. But we pride ourselves on the fact that the total amount which A.F.S.C. has sent us-- two checks of $1,000 each since last June-- has been made to count to the utmost, and we still are counting every dollar on the small remaining balance. I have asked Sylvia Perry to write the story of this weeks emigration, a family of three,- to show you the technique which we employ!

As for getting the student visum for Thomas Doeppner, we have formed a very close and pleasant relationship with the Am. Consulate here and I was merely asked to write an endorsement, for the A.F.S.C. personally (which was rather flattering as Thomas already carried a letter from Mr. Einstein!) I am enclosing a copy of the note because I spoke as the mouthpiece of the A.F.S.C. Thomas had worked in the Bureau for so long that we knew his sterling traits of character and his fine mind from first-hand knowledge.

I am writing to Mary Hoxie Jones tomorrow, to ask about the funds for sending Dr. and Mrs. Trampusch to America, in case I have to refund to the Dutch Work Group the amount which they contributed to our emigration fund in order that they may carry on the heavy load of refugee relief which the war thrust upon us. Families who were ready to leave for England, etc., have become suddenly our responsibility, being unable to emigrate-- every country has its own problem like this. Alas! Perhaps if England sends us a trained worker, they may also feel like sharing in the budget-- they are already sending us an increasing volume of work as we are of course their "bridge" to "Germany".

Mr. Krakauer from Hook van Holland has this moment come in, and we are so thankful that your message of encouragement is here to give him. Will you spur Robert Balderston about this case as he promised the Jewish Com. to give it his special attention. Mr. K. is such an outstandingly fine person. He is waiting in the office while we pack a box of pacifist magazines, candy and soap for our splendid young French CoO. who is in the same camp, interned under very hard conditions for the duration of the war! They are very isolated.

Einstein was always kind of a big deal. I am just imagining Opa running into the American Consulate office in Amsterdam and flashing his Einstein Card (that's what I'm calling his letter of recommendation from Einstein). Like- yep- I got Einstein- what do you have?!

I love how well-respected Opa is and what a good reputation he built for himself in Amsterdam. It again goes to show how simple and important it is to build bridges with people wherever you go- not just to keep your best for the elite. You never know when you may need help, or when someone may need yours.

This letter mentions Opa, but gives us a little inside view of the work and cooperation that happened across the ocean and between Quaker groups all over. I personally love the friendly jab at England's group when Mary suggests they might be willing to share the budget since they are using them so much. Ha.

The last paragraph is obviously in the middle of a conversation that we are missing parts of- but it seems like the Quaker group in Amsterdam is reaching out to interned folks already, and the work they do is far and wide. They're preparing pacifist packages, and delivering candy and soap.

This letter is so cheerful while it handles such serious subject matter. It makes me think of my work at Hospice. We are with dying people every day- such that it really seems very ordinary (which technically it is, but few people see it everyday). When we talk about our cases or arrange for specific types of care, we do so casually and matter-of-factly. There isn't much drama to it because it is the world we live in.

I think this is much of what the AFSC and other Quaker groups have adapted to. They are in that world with refugees, internment camps, war, and all the mess that war brings. It's not dramatic, it's life- and they're dealing with it. They're asking for money, stretching their dollar and rejoicing in the small victories.

And playing the Einstein card when they can.
Posted by Sarah Snow at Thursday, July 23, 2015