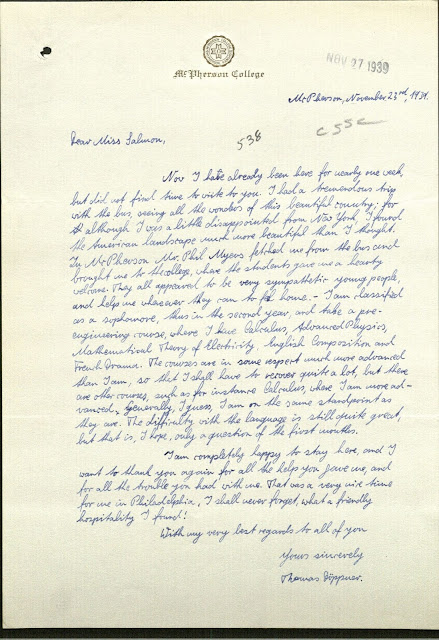 Now I have already been here for nearly one week, but did not find time to write to you. I had a tremendous trip with the bus, seeing all the wonders of this beautiful country; for although I was a little disappointed from New York, I found the American landscape much more beautiful than I thought. In McPherson, Mr. Phil Myers fetched me from the bus and brought me to the college, where the students gave me a hearty welcome. They all appeared to be very sympathetic young people, and help me whenever they can to feel home. I am classified as a sophomore, thus in the second year, and take a pre-engineering course, where I have Calculus, Advanced Physics, Mathematical Theory of Electricity, English Composition and French Drama. The courses are in some respect much more advanced than I am, so that I shall have to recover quite a lot, but there are other courses, such as for instance Calculus, where I am more advanced. Generally, I guess, I am on the same standpoint as they are. The difficulty with the language is still quite great, but that is, I hope, only a question of the first months.
I am completely happy to stay here, and I want to thank you again for all the help you gave me, and for all the trouble you had with me. That was a very nice time for me in Philadelphia, I shall never forget, what a friendly hospitality I found!
With my very best regards to all of you
Yours sincerely
Thomas Döppner.

I love this letter. He is settled in and getting used to college like any college boy. Of course he had to dodge Hitler's draft, get smuggled into Holland, and switch a ticket with someone when his ship across the Atlantic got delayed because of a war. Other than that- typical college kid.

When I read this letter, it reminded me of an excerpt from Opa's autobiography:

At the Quakers Headquarters, they helped me exchange my dutch guilders into dollars (I had enough money to get me to McPherson), and acquainted me with the bus schedule. They told me which bus to take, and where to change buses. It turned out that the first bus was headed for "Albuquerque," but that I would have to change in Kansas City to take the bus to McPherson. I did have a window seat on the bus, but I couldn't understand a word the bus driver said. I just followed the other passengers when they got out at a rest stop. At one of the restaurants we stopped I saw "sweet potatoes" on the menu; never having heard of them before, I thought I'll give them a try. I took a spoonful, and spit it right out. Until this day I find it difficult to like them, even though my wife has made an effort to make them "edible." (The bus trip too two or three days and two nights.)
There was no problem making the change in Kansas City, but when I arrived in McPherson, I didn't see anyone to meet me. The only person there was a fellow in an ice delivery truck. He came out of the truck, smiled, took my suitcases, and said, "Welcome to McPherson, Tom!" It was Phil Myers, President of the McPherson College Student Council... (This was my introduction to American students working their way through school.)

Opa saw more of the American landscape in his cross-country trek to Kansas than many Americans see in their lifetime. All of it was new to him: the culture, the geography, the language, even the food. (The sweet potatoes story cracks me up!)

I love that Phil Myers picked him up in an ice truck. We are so lucky because I have a picture of Phil Myers in front of his ice truck. Here's Opa's introduction to McPherson College: 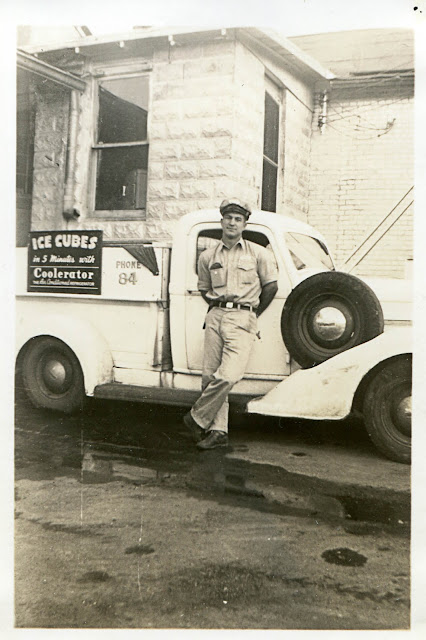 I'd be alright with that guy picking me up.

Opa's welcome to McPherson was warm and friendly, with people offering to help and making his transition into American life as easy as it could be. Opa jumped in feet first into his classes, and he worked hard to overcome the language barrier and catching up on coursework.

Opa writes cheerfully to Charlotte that he is happy to stay and feels welcomed. He thanks Charlotte for her work and her hospitality in Philadelphia.

Behind all these positive words, I can't help but wonder if Opa had someone he could be honest with. Someone he could share about his homesickness. Someone who could even begin to understand what he had been through. Sometimes you can be surrounded by good intentions and smiling faces and feel incredibly alone and isolated.

I traveled to McPherson in August of 2014, and I can vouch for the hospitality of that place. Even seventy five years later, there is a feeling of family and togetherness in that town. If Opa was to be alone and scared somewhere in America, McPherson was likely one of the best places for it.
Posted by Sarah Snow at Friday, July 17, 2015