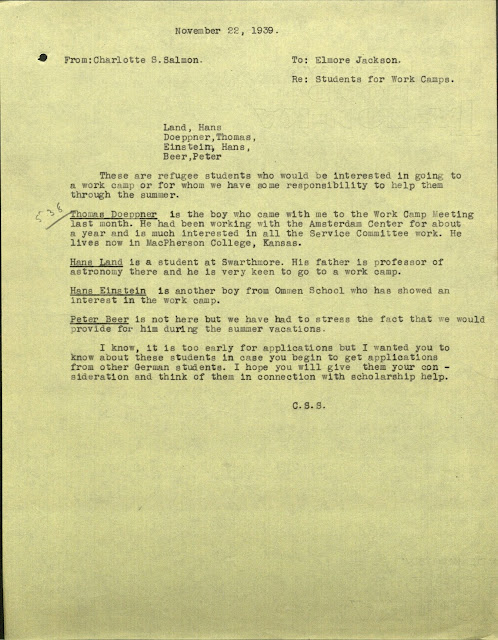 These are refugee students who would be interested in going to a work camp or for whom we have some responsibility to help them through the summer.

Thomas Doeppner is the boy who came with me to the Work Camp Meeting last month. He had been working with the Amsterdam Center for about a year and is much interested in all the Service Committee work. He lives now in McPherson College, Kansas.

Hans Land is a student at Swarthmore. His father is professor of astronomy there and he is very keen to go to a work camp.

Hans Einstein is another boy from Omen School who has showed an interest in the work camp.

Peter Beer is not here but we have had to stress the fact that we would provide for him during the summer vacations.

I know, it is too early for applications but I wanted you to know about these students in case you begin to get applications from other German students. I hope you will give them your consideration and think of them in connection with scholarship help.

The work is never done for those placing refugees. The students who have temporary visas to gain entry in the United States must have legitimate work or financial security for the summers when they are not in school.

As early as November, Charlotte Salmon of the American Friends Service Committee (AFSC) is organizing and securing the summers for students who have barely set foot on American soil. Charlotte has had to stay ahead of the game, a game that is constantly changing with every new political situation put forth by the approaching war.

Opa seems to have built himself a positive reputation among the Quakers in Amsterdam. It's still astounding how his connections with the Quaker youth group in Berlin and Amsterdam have essentially paved the way for him to America. Now the Quakers continue to find ways to make his road smooth.
Posted by Sarah Snow at Wednesday, July 08, 2015