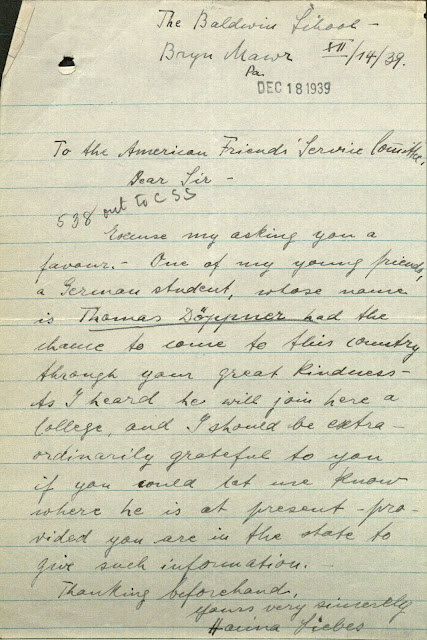 To the American Friends Service Committee,

Excuse my asking you a favour. One of my young friends, a German student, whose name is Thomas Döppner had the chance to come to this country through your great kindness- As I heard he will join here a College, and I should be extraordinarily grateful to you if you could let me know where he is at present- provided you are in the state to give such information. 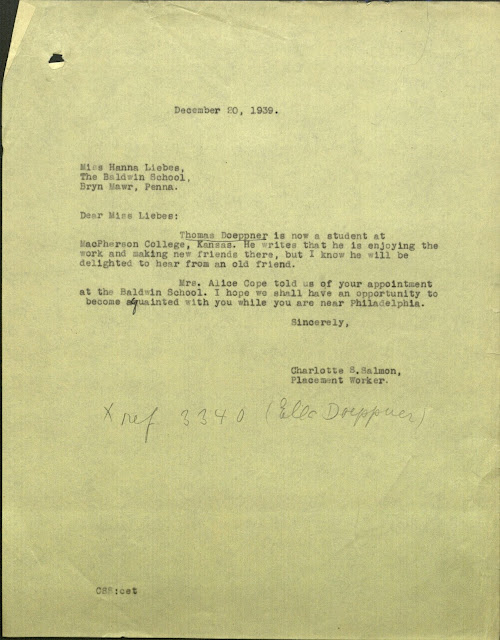 Return letter from Charlotte Salmon of AFSC to Hanna Liebes

Thomas Doeppner is now a student at MacPherson College, Kansas. He writes that he is enjoying the work and making new friends there, but I know he will be delighted to hear from an old friend.

Mrs. Alice Cope told us of your appointment at the Baldwin School. I hope we shall have an opportunity to become acquainted with you while you are near Philadelphia.

First, I want to point out that Hanna wrote her note to a "sir" and for the most part, the folks getting things done at the American Friends Service Committee (AFSC) are mostly women. It's funny how we assume things about an organization or group of folks- and while sometimes we're right- sometimes we're completely off. The workhorses of the AFSC were women, and they knew how to get things done.

So add to the long list of jobs for the AFSC the job of being a refugee directory of sorts. This inquiry is not an unusual one to find in the AFSC files (Jason and I have perused more than a handful of these case files). After the war, the AFSC acted as a source of information and a searching arm for refugees and survivors of the war to find one another.

Charlotte was more than happy to connect Hanna to her friend, and she opened the welcoming door for Hanna if she ever came near the office.

The AFSC did more than just bring people into the United States, they made sure they were welcomed, they stayed in touch and connected them with anyone who would help make their transition easier. The AFSC had a very holistic view of how they helped refugee. They didn't leave them stranded once they cross the Atlantic, the AFSC followed them every step and made sure things were working out for them. After all, they had so few success stories in comparison to the amount of folks they tried to help- they wanted their successes to remain a success.

The little handwritten note at the end leads me to believe that Ella has already got a file now for potentially helping her get a visa out of Germany. We will learn about that soon. Stay tuned!
Posted by Sarah Snow at Saturday, July 25, 2015