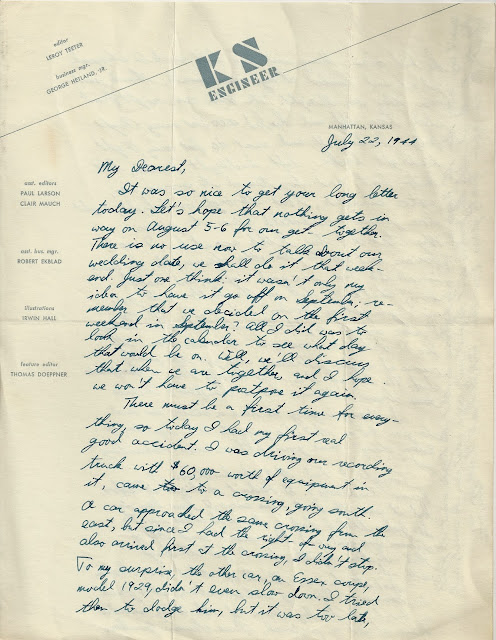 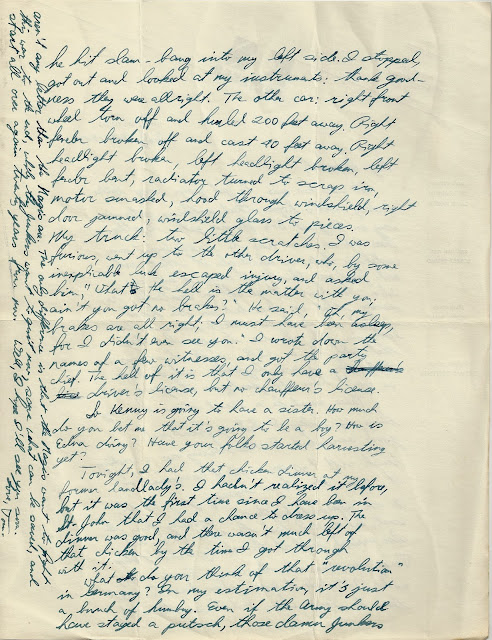 Letter from Opa to Grandmother, July 22, 1944.
Transcription:
July 22, 1944
My Dearest,
It was so nice to get your very long letter today. Let's hope that nothing gets in way on August 5-6 for our get-together. There is no use now to talk about our wedding date, we shall do it that weekend. Just one think: it wasn't only my idea to have it go off on September; remember that we decided on the first weekend in September? All I did was to look in the calendar to see what day that would be on. Well, we'll discuss that when we are together, and I hope we won't have to postpone it again.
There must be a first time for everything, so today I had my first real good accident. I was driving our recording truck with $60,000 worth of equipment in it, came to a crossing, going south. A car approached the same crossing from the east, but since I had the right-of-way and also arrived first at the crossing, I didn't stop. To my surprise, the other car, an Essex coupe, model 192, didn't even slow down. I tried then to dodge him, but it was too late, he hit slam-bang into my left side. I stopped, got out and looked at my instruments: thank goodness they were alright. The other car: right front wheel torn off and hurled 200 feet away. Right fender broken off and cast 40 feet away. Right headlight broken, left headlight broken, left fender bent, radiator turned to scrap iron, motor smashed, hood through windshield, right door jammed, windshield glass to pieces. My truck: two little scratches. I was furious, went up to the other driver, who, by some inexplicable luck escaped injury, and asked him, "what the hell is the matter with you; ain't you got no brakes?" He said, "Oh, my brakes are all right; I must have been asleep, for I didn't see you." I wrote down the names of a few witnesses, and got the party chief. The hell of it is that I only have a driver's license, but no chauffeurs license.
So Kenny is going to have a sister. How much do you bet me that it's going to be a boy? How is Edna doing? Have your folks started harvesting yet?
Tonight, I had that chicken dinner at my former landlady's. I hadn't realized it before, but it was the first time since I have been in St. John that I had a chance to dress up. The dinner was good, and there wasn't much left of that chicken by the time I got through with it.
What do you think of that "revolution" in Germany? In my estimation it's just a bunch of humbug. Even if the Army should have staged a putsch, those damn Junkers aren't any better than the Nazis are. The only difference is that the Nazis want to fight this war to the end, while the Junkers want to quit now, save what can be saved, and start all over again twenty years from now. Well I hope I'll see you soon.
Love,
Tom.
Oh Opa, I guess you did have a big accident. It sounds like this wasn't your fault, but it's hard to tell. The mean German in him comes out on the road, though. Poor guy just about obliterated his vehicle and barely escaped death himself, and Opa is yelling at him. I think this was where Opa allowed some of his emotions to escape: on the road, via the horn.
Luckily everyone was OK, except the Essex Coupe. Poor, pretty thing.

It looks like we won't get to be privy to the wedding date conversation, as they will be seeing each other over the weekend and getting to talk about it face to face. This is better for them, but a bummer for us.
Opa finally cashed in on his chicken dinner, and it sounds like it was a nice event! He got to dress up, got a home-cooked meal, and likely had at least a little conversation that was different from his typical work day banter.
Opa's mention of the attempted putsch (coup) reminds me of where we are in history. We've been so focused in on Opa and Grandmother that the war has faded into the background. I should know better that it was never background for Opa. He always had his finger on the pulse of what was going on in the world, especially this war.
Opa refers to the junkers: these are the so-called upper-class Germans who descended from the land owners; sort of royalty of the Prussian era. They seem to want their power back now that Hitler hasn't made things better.
Opa rolls his eyes at them. I agree.
There is a conspiracy among them and the higher military ranks of the army to assassinate Hitler and end the war before more is lost. As Opa said, "...the Junkers want to quit now, save what can be saved, and start all over again twenty years from now."
Here's what happened on July 21st: a plot to kill Hitler which had been in lukewarm effect since the beginning of Hitler's rise to power, was again attempted with a time bomb planted by a high-ranking official with fancy background. This bomb went off, killing and injuring many, but not killing Hitler. Hitler was injured, and then angry. Executions of many suspected anti-Nazi army officers were ordered, and the war just kept going. Now the army was truly a tool of Hitler's with very little sign of resistance.
Opa's assessment of the morality or altruism of the army putsch was right on the money. These royal conspirators consistently showed that their motives were to save their own skin. They did not have the moral or political fortitude to save the country.
In accounts of the German underground, I see similar assessments: that the fortitude to really stand up and say "no" against the clear horrors that Hitler brought were few and far between. The royal Prussians only pulled the trigger when it looked like they, too, would lose everything. Many religious groups were either too little or too late in their resistance. In fact, the most powerful resistance came in the form of small acts, small organizations, and unimportant people.
The Quakers (especially the Berlin Quakers) were actually one of the more productive resisters there were. Not because they had power and might, but because they had clear moral objectives and the courage to try.
It's challenging for me to read about this and reflect. What moral focus do I have? Do I have the courage to try?
Posted by Sarah Snow at Thursday, December 24, 2020