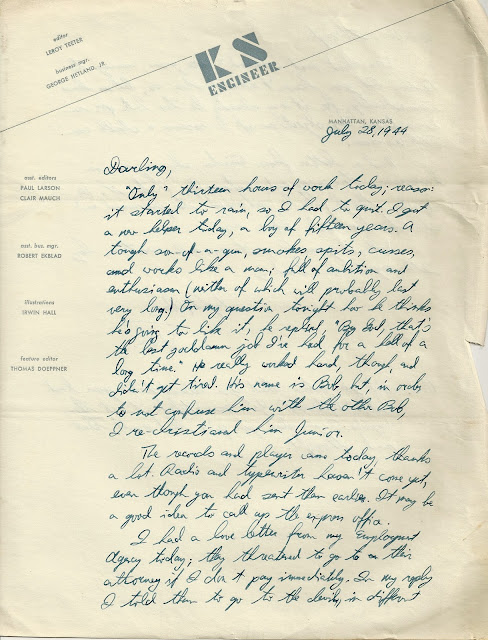 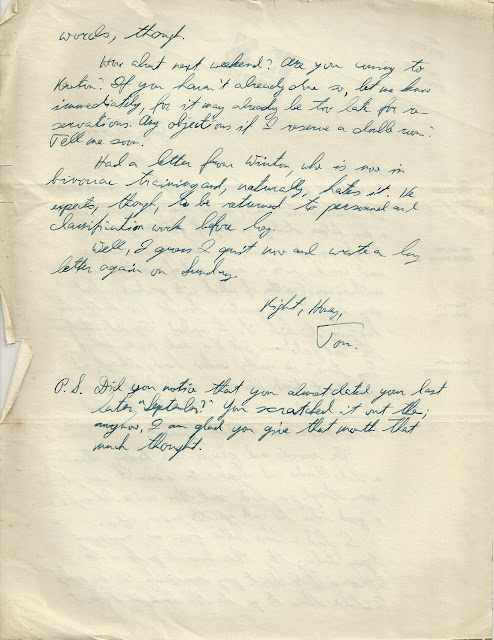 Letter from Opa to Grandmother, July 28, 1944.
Transcription:
July 28, 1944
Daring,
"Only" thirteen hours of work today; reason: it started to rain, so I had to quit. I got a new helper today, a boy of fifteen years. A tough son-of-a-gun, smokes, spits, cusses, and works like a man; full of ambition and enthusiasm (neither of which will probably last very long.) On my question tonight how he thinks he's going to like it, he replied, "By God, that's the best goddamn job I've had for a hell of a long time." He really worked hard, though, and didn't get tired. His name is Bob, but in order to not confuse him with the other Bob, I re-christianed him Junior.
The records and player came today, thanks a lot. Radio and typewriter hasn't come yet, even though you had sent them earlier. It may be a good idea to call up the express office.
I had a love letter from my Employment Agency today; they threatened to go to their attorney if I don't pay immediately. In my reply I told them to go to the devil, in different words, though.
How about next weekend? Are you coming to Newton? If you haven't already done so, let me know immediately, for it may already be too late for reservations. Any objections if I reserve a double room? Tell me soon.
Had a letter from Winton, who is now in bivouac training and, naturally, hates it. He expects, though, to be returned to personnel and classification work before long.
Well, I guess I quit now and write a long letter again on Sunday.
Night, Honey,
Tom.
P.S. Did you write that you almost dated you last letter "September?" You scratched it out then; anyhow, I am glad you give that month that much thought.
Bob, aka "Junior," is a character from the movies! What has this child been doing in his short 15 years to create a 38 year old seasoned sailor? Opa obviously is endeared to him, and doesn't begrudge him his salty personality, especially since it is paired with such enthusiasm and energy. I want to know so much more about this kid. I hope Opa talks about him more in subsequent letters!
Has Grandmother seriously not confirmed their weekend plans? Opa has way more patience than I do. I'd be like: yo- I've been asking you for two straight weeks!
Opa can't help but put in a little not-so-subtle hint about the date of their wedding.
Posted by Sarah Snow at Tuesday, December 29, 2020