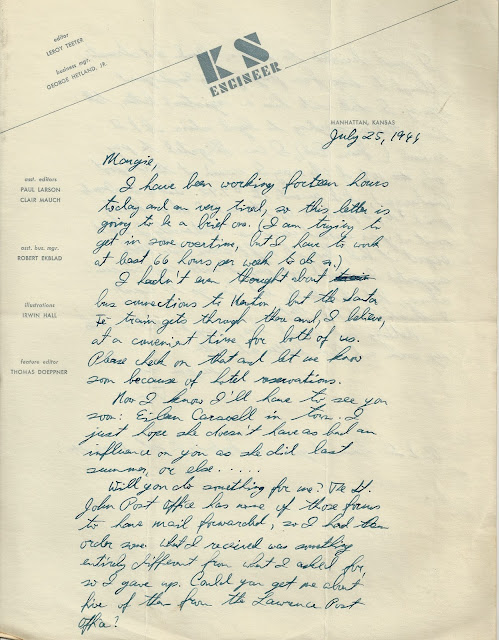 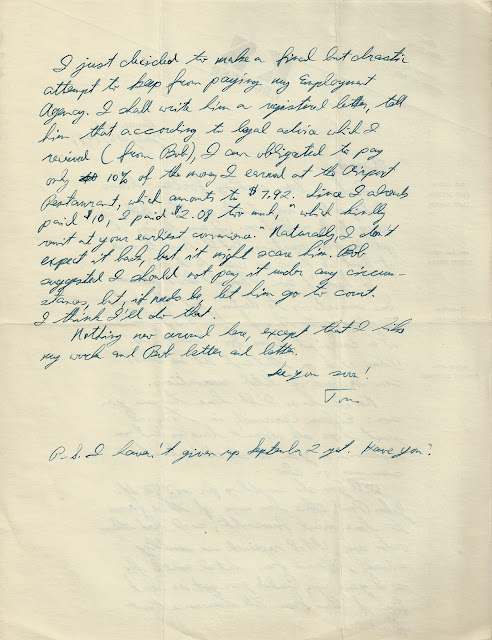 Letter from Opa to Grandmother, July 25, 1944.
Transcription:
July 25, 1944.
Margie,
I have been working fourteen hours today and am very tired, so this letter is going to be a brief one. (I am trying to get in some overtime, but I have to work at least 66 hours per week to do so.)
I hadn't thought about bus connections to Kanton(?), but the Santa Fe train gets through there and, I believe, at a convenient time for the both of us. Please check on that and let me know soon because of hotel reservations.
Now I know I'll have to see you soon: Eileen Carswell in town. I just hope she doesn't have as bad an influence on you as she did last summer, or else...
Will you do something for me? The St. John Post Office has none of those forms to have mail forwarded, so I had them order some. What I received was something entirely different from what I asked for, so I gave up. Could you get me about five of them from the Lawrence Post Office?
I just decided to make a final but drastic attempt to keep from paying my Employment Agency. I shall write him a registered letter, tell him that according to legal advice which I received (from Bob), I am obligated to pay only 10% of the money I earned at the Airport Restaurant, which amounts to $7.92. Since I already paid $10, I paid $2.08 too much, "which kindly remit at your earliest convenience." Naturally, I don't expect it back, but it might scare him. Bob suggested I should not pay him under any circumstances, but if needs be, let him go to court. I think I'll do that.
Nothing new around here, except that I like my work and Bob better and better.
See you soon!
Tom.
P.S. I haven't given up September 2 yet. Have you?
I'm not up to par on my research of the employment agencies that existed at this time. I get the feeling that Opa's agent/agency turned out to be more of a scam than a good service. In the 1940s, the work force was looking for people to hire to replace the significant numbers of employees who were now fighting overseas or otherwise engaged in the war effort. This should have been a boon for Opa, but with his complicated visa standing, and the fact that his skills just happened to connect him with jobs that were potentially war-related and classified, he felt he needed some help from an agency to place him. After all, he'd had positive results from the Quaker agency, the AFSC. It turns out this agency just gave him a headache and expected him to pay for it. It looks like they wanted him to pay them for services rendered, and a portion of his pay he made at that awful restaurant (which I guess they helped him get that job).
What he did as a last ditch effort to not pay a dime more for their unhelpfulness is straight out of the Doeppner Play Book. He wrote them using official language with words that could be assumed to mean things, but didn't mean much: "legal advice" (given by a buddy at work). The part that made me laugh was when he detailed the amount he felt he owed, and demonstrated that he had actually overpaid, and therefore would await them sending the change.
A blanket memory I have growing up (that stretches across several examples) is of my Dad on the phone with the insurance company, or whoever provided the services whose charges he was contesting.
Dad one time quipped to me that he was going to start sending the company a bill for his time on the phone to correct their mistake. In fact, I think that was the hospital for my second spinal surgery. I remember receiving a phone call to my hospital room the day after my surgery and I answered it, thinking it was a friend or family member checking in. It was someone from the hospital calling to let me know my insurance had denied my claim and would not be covering my surgery. Or something to that effect. I was hopped up on morphine and was only eighteen years old. I basically handed the phone over to my parents and thus started my father's long fight with the hospital and insurance company. I'm pretty sure eventually they paid, or at least found some resolution. My Dad fought with many an insurance rep over whether my newest pair of hearing aids would be covered.
And honestly, we should be able to bill for our time spent advocating for our insurance to cover what it is supposed to cover. I know my Dad, like Opa, did not expect them to pay the bill, but rather hoped they would get the point and leave it. Who knows if it worked for Opa. I'll have to ask my Dad if it ever worked for him.
In the meantime, Opa is looking forward to seeing Grandmother, still trying to nail down logistics, and really hoping that Eileen Carswell doesn't mess with Grandmother's head. At least that's how I read into it. Maybe this friend was part of Grandmother's reason for being so wishy-washy about the wedding? Maybe Eileen wasn't a fan of Opa's? Who knows. Opa's still rooting for September 2nd, and he has no idea what Grandmother will say.
Posted by Sarah Snow at Sunday, December 27, 2020