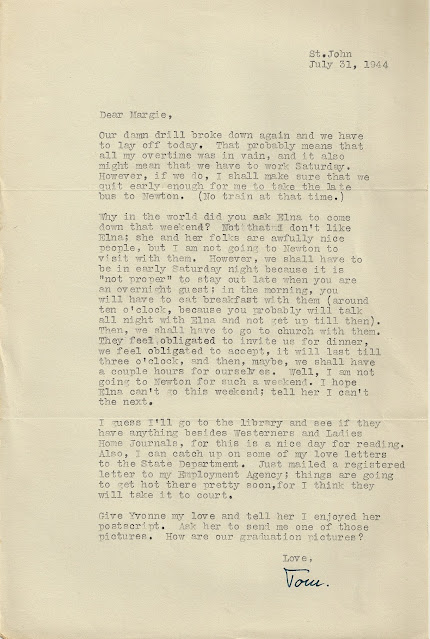 Letter from Opa to Grandmother, July 31, 1944.
Transcription:
St. John
July 31, 1944
Dear Margie,
Our damn drill broke down again and we have to lay off today. That probably means that all my overtime was in vain, and it also might mean that we have to work Saturday. However, if we do, I shall make sure that we quit early enough to take the late bus to Newton. (No train at that time.)
Why in the world did you ask Elna to come down that weekend? Not that I don't like Elna; she and her folks are awfully nice people, but I am not going to Newton to visit with them. However, we shall have to be in early Saturday night because it is "not proper" to stay out late when you are an overnight guest; in the morning, you will have to eat breakfast with them (around ten o'clock, because you probably will talk all night with Elna and not get up till then). Then, we shall have to go to church with them. They feel obligated to invite us for dinner, we feel obligated to accept, it will last till three o' clock, and then, maybe, we shall have a couple hours for ourselves. Well, I am not going to Newton for such a weekend. I hope Elna can't go this weekend; tell her I can't the next.
I guess I'll go to the library and see if they have anything besides Westerners and Ladies Home Journals, for this is a nice day for reading. Also, I can catch up on some of my love letters to the State Department. Just mailed a registered letter to my Employment Agency; things are going to get hot there pretty soon, for I think they will take it to court.
Give Yvonne my love and tell her I enjoyed her postscript. Ask her to send me one of those pictures. How are our graduation pictures?
Love,
Tom.
When my husband's Grandfather, "Grampy," played games with partners, he was famously remembered for uttering the words: "Dammit, Miriam!!"  Miriam was Jason's grandmother, "Grammy," who was not especially good at paying attention during those games. She would miss something and her husband would utter this phrase, which my husband and I now repeat to each other if the other has missed something in a game. It cracks us all up, and reminds us of the sweet, and not so game-savvy mannerisms of Grammy.
As soon as I read that Grandmother had invited a friend to her romantic weekend with Opa, I immediately heard in my head "Dammit Margie!" lol.
But seriously, what was she thinking?! In my best "give her the benefit of the doubt" scenario, I think she was trying to get around paying for a hotel room (or sharing one with Opa). I think perhaps she didn't feel comfortable sharing a room, and rather than have Opa pay for another room, she would stay with her friend's parents who lived there. And of course if you stay with the friend's parents, you should invite the friend too.
Clearly she missed literally every signal Opa was sending about this being a nice romantic getaway for the two of them. It was to be a time for them to reconnect after not seeing each other for  a while, a time to plan out wedding details, and decide, once and for all, on a date. Or maybe she thought they could still do all this, she would just sleep over at her friend's house.
But Opa knew better (and I would venture that he's right in his predictions). He knew that they would need to turn in early, because it's rude to stay out late when you're a house guest (still true). He knew that she would stay up late catching up with her friend, that they would eat a late breakfast at the house and then have to go to church, and then be obligated for dinner (lunch). After all the social norms were covered, Grandmother and Opa would have a few hours alone together. This was not the weekend Opa signed up for, and he made that very clear.
I appreciate that he didn't make this about the friend, but really about the kind of weekend he was hoping for.
Now, in Grandmother's defense (besides the weak financial one), when Opa opened his letter with "I might have to work Saturday, but I'll still be able to get there later," I thought, is she supposed to just hang out in this town until he maybe or maybe don't show up depending on the very unreliable instruments of his work? Maybe she knows something we don't and decided to have a back up plan in case Opa's work interfered.
I don't know why Opa didn't just take the day off either way. Pretty sure that's a thing.
Ah, bad communication in young couples, what a mess.
I do love this line, though: "I hope Elna can't go this weekend; tell her I can't the next."
Posted by Sarah Snow at Thursday, December 31, 2020