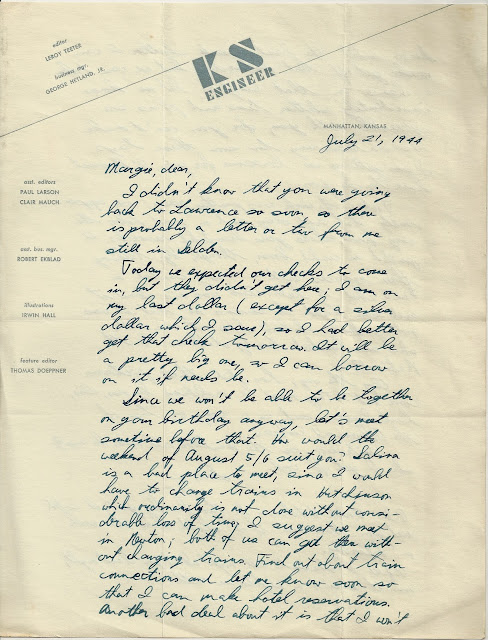 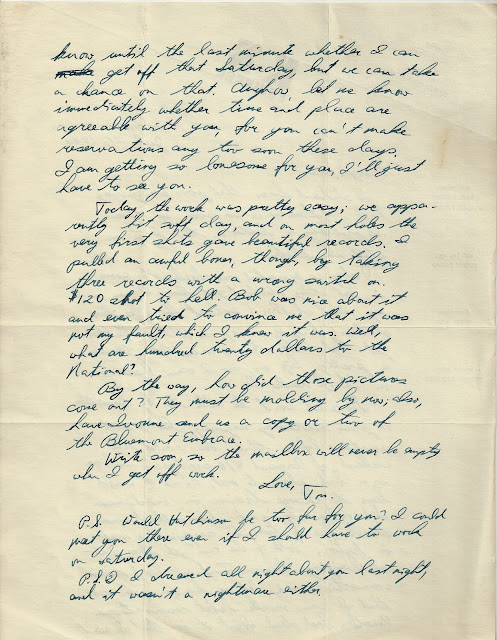 Letter from Opa to Grandmother, July 21, 1944.
Transcription:
July 21, 1944
Margie, dear,
I didn't know that you were going back to Lawrence so soon, so there is probably a letter or two from me still in Selden.
Today we expected our checks to come in, but they didn't get here;  I am on my last dollar (except for a silver dollar which I save), so I had better get that check tomorrow. It will be a pretty big one, so I can borrow on it if needs be.
Since we won't be able to be together on your birthday anyway, let's meet sometime before that. How would the weekend of August 5/6 suit you? Salina is a bad place to meet, since I would have to change trans in Hutchinson which ordinarily is not one without considerable loss of time. I suggest we meet in Newton; both of us can get there with-out changing trains. Find out about train connections and let me know soon so that I can make hotel reservations. Another bad deal about it is that I won't know until the last minute whether I can get off that Saturday, but we can take a chance on that. Anyhow, let me know immediately whether time and place are agreeable with you, for you can't make reservations any too soon these days. I am getting so lonesome for you, I'll just have to see you.
Today, the work was pretty easy; we apparently hit soft clay, and on most holes the very first shots gave beautiful records. I pulled an awful boner, though, by taking three records with a wrong switch on. $120 shot to hell. Bob was nice about it and even tried to convince me that it was not my fault, which I know it was. Well, what are hundred twenty dollars to the National?
By the way, how did those pictures come out? They must be molding by now; also have Ivonne send us a copy or two of the Bluemont Embrace.
Write soon, so the mailbox will never be empty when I get off work.
Love,
Tom.
P.S. Would Hutchinson be too far for you? I could meet you there even if I should have to work on Saturday.
P.S.(2) I dreamed all night about you last night, and it wasn't a nightmare either.
Looks like we'll have to wait to get Grandmother's response from Opa's "do you really want to get married," because that letter is in Selden and she's back to grad school. Oof, that had to have been hard to have such a disjointed conversation!
I have empathy for Opa waiting for his check to come in. I imagine in a time when direct deposit isn't a thing yet, checks were inevitably delayed a few days or more here and there. I once worked for a company that for whatever reason insisted on paying by check (my suspicion is that they had cash flow problems, which is one of many reasons why I stopped working for them). So I was never sure exactly when my pay would come in, and that was extremely frustrating. One of my paychecks was over four weeks late and I was so thankful that my income was our secondary income, but it was still a race against the credit card payment.
Reading about Opa's silver dollar that he saved just made me chuckle. That was exactly how Opa was financially. He might think he was on his last dime, but he always had managed to save money just in case. He passed this talent to my Dad, and now I'm cursed with frugality and the need to save. I'm not mad about it.
So let's clear something up really quickly here, when Opa writes "pulled a boner," it is not what you think it is. I giggled but knew that he meant something else. I looked it up, and sure enough, this is a phrase more commonly used in the 1930-40s to mean making a costly blunder. Unfortunately it has racist origins, as it is modeled after a common skit in minstrel shows. They depict a person of color who carries two bones as instrument/tools, and is asked questions that they respond to with silly and nonsensical answers. I'm not sure whether or not Opa would have known these origins since he did not grow up in America.
Opa continues to try to plan a time for he and Grandmother to get together. I wonder if he is the main instigator of these reunions, or if she was trying as much. Either way, he is definitely not shy about it, or about sharing his dreams (not nightmares) about her. I love how in love he is.
Posted by Sarah Snow at Thursday, November 26, 2020