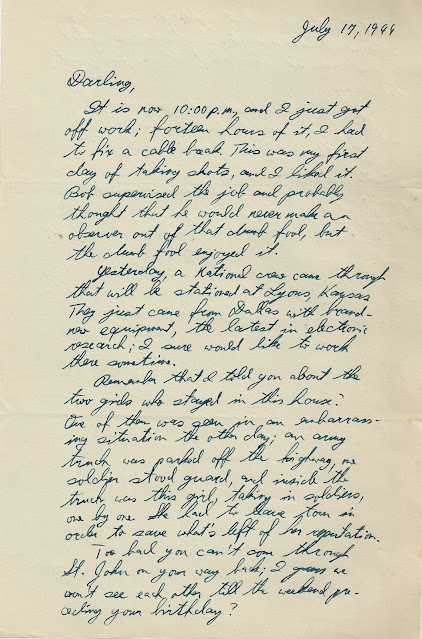 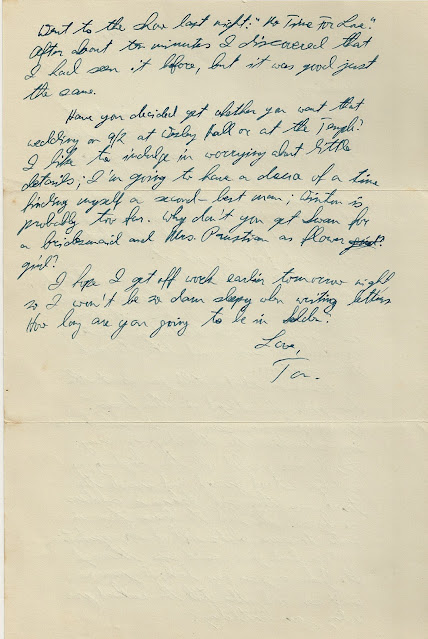 Letter from Opa to Grandmother, July 17, 1944.
Transcription:
July 17, 1944
Darling,
It is now 10:00p.m., and I just got off work; fourteen hours of it, I had to fix a cable break. This was my first day of taking shots, and I liked it. Bob supervised the job and probably thought he would never make an observer out of that dumb fool, but the dumb fool enjoyed it.
Yesterday, a National crew came through that will be stationed at Lyons, Kansas. They just came from Dallas with brand-new equipment, the latest in electronic research; I sure would like to work there sometime.
Remember that I told you about the two girls who stayed in this house? One of them was seen in an embarrassing situation the other day; an army truck was parked off the highway, one soldier stood guard, and inside the truck was this girl, taking in soldiers, one by one. She had to leave town in order to save what's left of her reputation.
Too bad you can't come through St. John on your way back; I guess we won't see each other till the weekend preceding your birthday?
Went to the show last night: "No Time For Love." After about ten mites I discovered thatI had seen it before, but it was good just the same.
Have you decided yet whether you want that wedding on 9/2 at Wesley Hall or at the Temple? I like to indulge in worrying about little details; I'm going to have a deuce of a time finding myself a second-best man; Winton I probably too far. Why don't you get Swan for a bridesmaid and Mrs. Paustian as flower girl?
I hope I get off work earlier tomorrow night, so I won't be so darn sleepy writing letters. How long are you going to be in Selden?
Love,
Tom.
Well, if any of you know me you know I can't leave that story about the woman and the army men alone. First, I am a little horrified and hope to God that everything was consensual. Second, it's a little bit "exhibit A" of the reality of a patriarchal society that this story only shames the woman ("girl"), and does not mention the responsibility or morality/reputation of the multiple men who participated. And it is also "exhibit A" of our cultural habit to shame and hide sex and sexuality. I wish I could say we've seen amazing progress in the nearly 80 years since, but we have not. Progress, but not enough.
Opa is still pushing the September 2nd wedding date, and I get the sense that he hasn't gotten a definitive confirmation. Maybe he has, but he's definitely taking the initiative in planning location, etc. They are looking to do the ceremony on the Kansas State campus. The Wesley Hall is the location where the Wesley Fellowship (the Methodist College Ministry) holds its meetings. This is the group that connected Grandmother and Opa. Grandmother was a life-long Methodist and Opa was a life-long seeker of intellectual and spiritual engagement, even if it wasn't a full commitment. The Temple is the chapel on campus for religious gatherings. I've been to both, and the chapel is definitely prettier, but it may not have held has many memories for them. We'll see what Grandmother decides. If she decides.
Posted by Sarah Snow at Tuesday, November 24, 2020