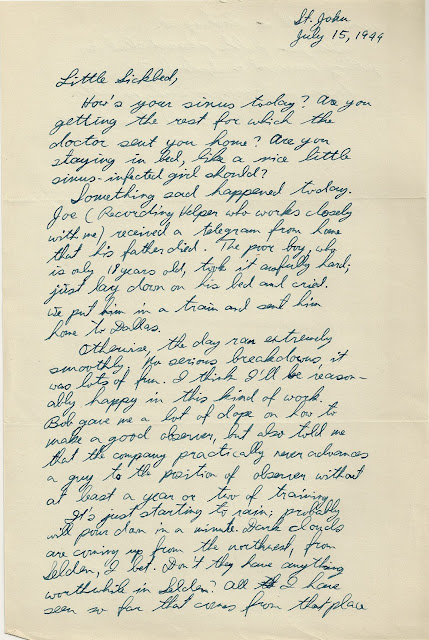 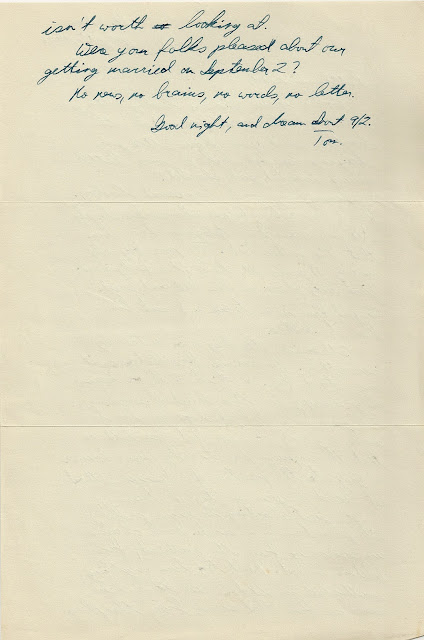 Letter from Opa to Grandmother, July 15, 1944
Transcription:
St. John
July, 15, 1944
Little Sickled,
How's your sinus today? Are you getting the rest for which the doctor sent you home? Are you staying in bed, like a nice little sinus-infected girl should?
Something sad happened today. Joe (Recording Helper who works closely with me) received a telegram from home that his father died. The poor boy, who is only 18 years old, took it awfully hard; just lay down on his bed and cried. We put him in a train and sent him home to Dallas.
Otherwise, the day ran extremely smoothly. No serious breakdowns, it was lots of fun. I think I'll be reasonably happy in the kind of work. Bob gave me a lot of dope on how to make a good observer, but also told me that the company practically never advances a guy to the position of observer without at least a year or two of training.
It's just starting to rain; probably will pour down in a minute. Dark clouds are coming up from the northwest, from Selden, I bet. Don't they have anything worthwhile in Selden? All I have seen so far that comes from that place isn't worth looking at.
Were your folks pleased about our getting married on September 2?
No news, no brains, no words, no letter.
Good night, and dream about 9/2.
Tom.
Before I write the blog, I want to let you know that the word "dope" in this context is 1940s slang for "information the scoop." I learned that today!
So, it just hit me, Opa was sarcastic. That was his humor. So is my Dad. So am I. My sisters actually aren't and so I've learned that not everyone understands or appreciates sarcasm, and it actually can be rude. Ha. I am glad my sisters tempered me, because I think people thought I was mean, and I really didn't know how I came off. I would bet money that August was also sarcastic. Ella, not so much. The friends I instantly connect with are the ones who can bite back with sarcasm in witty ways. They know who they are.
Here's my quick little analysis of that sarcasm. It's how we shield ourselves from intimate connection. I know, I know, I may be going too far with this. Sure, it's humor, but I think excessive sarcasm at the base can be a way to sort of keep people, or reality, at arms length. It's a way to keep things light and not serious. Sarcasm is predicated on not taking things too seriously. So when someone has sarcasm as a foundation of communication, I think there may be a layer of avoidance there. And sure enough, if I were take a litmus test of people in my family who are a little more "at arms length" type folks, I would start with myself and then go back to my Dad, his Dad, and I bet his Dad's Dad. Genetics/nurture and all that.
I thought about this because of Opa's sarcasm, but also the big picture of how Opa seems to be coping with the trauma that he has endured over the last several years (I mean, if we're counting, it's been his whole life that's been tumultuous). He tells this heartbreaking story of sweet Joe who learns of his fathers death. I really appreciate that he sobs in his bed. That seems an appropriate response. Opa feels for him, but does not connect. He does not open the portal to the loss in his own life (known and unknown). He holds it at arms length.
I think in a way this was the gift that Grandmother gave him. She didn't pry, she accepted him at face value but could receive whatever emotions he wanted to express. She was born and raised a mid-westerner, which is about as close as you can get to being German. She, too, was not an emotional person. She was a safe place for Opa. I think she helped him keep sane. My only caveat is that I think they continued that arms-length policy for most of their lives, and it became harder and harder to face the trauma. I think this was the tension he felt with his sister Patti after the war. She didn't have the luxury of holding the trauma at arms-length because it was happening right there. She may have wondered if Grandmother kept Opa from facing it. I think the truth is somewhere in the middle. Grandmother didn't force Opa to face it, and he was grateful to just love her and move forward.
I don't know that Opa ever fully processed his trauma. He began  to reflect when he was diagnosed with Alzheimers and started talking about his life before. He wrote his autobiography, but even that was full of facts without much emotion.
I found this to be across the board with most of the people I interviewed from Opa's life in Germany. They all spoke facts, even about their own despair, it was: "that happened, and then I got better." We all process our grief and trauma differently, and I just can't help but wonder if Opa ever got to do it at all. Is there trauma that is too hard to face?
Posted by Sarah Snow at Monday, November 23, 2020