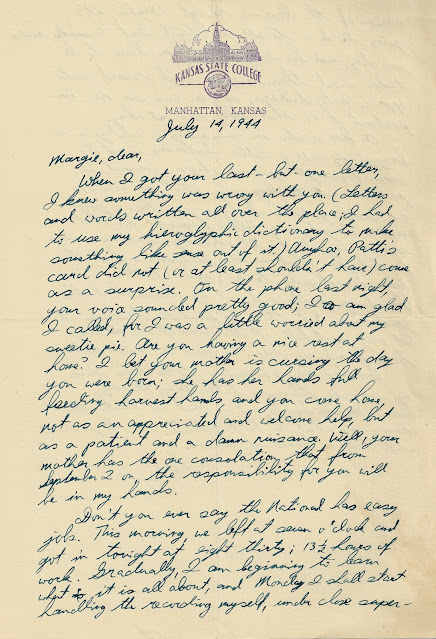 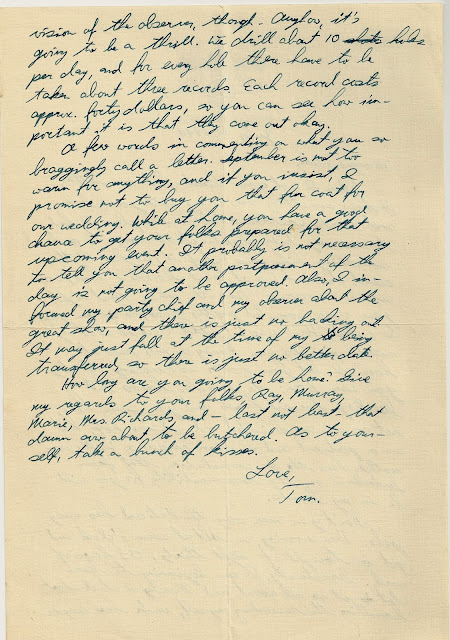 Letter from Opa to Grandmother
Transcription:
July 14, 1944
Margie, dear,
When I got your last-but-one letter, I knew something was wrong with you. (Letters and words written all over the place; I had to use my hieroglyphic dictionary to make something like sense out of it.) Anyhow, Patti's card did not (or at least shouldn't have) come as a surprise. On the phone last night, your voice sounded pretty good; I am glad I called, for I was a little worried about my sweetie pie. Are you having a nice rest at home? I bet your mother is cursing the day you were born; she has her hands full feeding harvest hands and you come home, not as an appreciated and welcome help, but as a patient and a damn nuisance. Well, your mother has the one consolation that from September 2 on the responsibility for you will be in my hands.
Don't you ever say the National has easy jobs. This morning we left at seven o'clock and got in tonight at eight thirty; 13 1/2 hours of work. Gradually, I am beginning to learn what it is all about, and Monday I shall start handling the recording myself, under close supervision of the observer, though. Anyhow, it's going to be a thrill. We drill about 10 holes per day, and for every hole there have to be taken about three records. Each record costs approx. forty dollars, so you can see how important it is that they come out okay.
A few words in commenting on what you braggingly call a letter. September is not too warm for anything, and if you insist, I promise not to buy you that fur coat for our wedding. While at home, you have a good chance to get your folks prepared for that upcoming event. It probably is not necessary to tell you that another postponement of the day is not going to be approved. Also, I informed my party chief and my observer about the great show, and there is just no holding out. It may just fall at the time of my being transferred, so there is just no better date.
How long are you going to be home? Give my regards to your folks, Ray, Murray, Marie, Mrs. Richards, and - last but not least- that damn cow about to be butchered. As to yourself, take a bunch of kisses.
Love,
Tom.
It appears Opa received some letters or at least Red Cross postcards from relatives (a card from Patti, his sister, is referenced in this letter) during this time. I'm not sure why they aren't in our collection from what he saved. Were they deemed unimportant since they were just short 25 word updates with not much information? Or were they a painful reminder of some of the darkest times for his family? It does appear that he kept everything from his mother.
Poor Grandmother is sick and Opa is teasing her and making her feel perhaps a little worse. That was his sense of humor, and she was likely used to it by the point. He defends his honor, responding to what I'm sure Grandmother noticed (as I did) that Opa did a lot of sitting around and waiting on broken things for his job. He was right, though, his job was sort of a routine of feast and famine. When everything was working- they worked long hours to capitalize.
Grandmother seems to be again trying to delay the wedding date. It feels very much like there's something she's not telling him. I think she does honestly want to get married, but every time the date creeps nearer, she gets cold feet and gives a reason to delay. Does she agree to the dates to begin with? I kind of get the feeling that Opa is a little bit like a kid rushing out the door to Disney and the parents are like- um- we never said we were going. I also wonder if her parents are on board. If they aren't, that had to be hard for her. She had a close relationship to her parents.
Hopefully Grandmother feels better soon, and hopefully she communicates a little more straight-forward her feelings about the wedding date. Opa, well he's still a happy lark in love and fully employed in the free United States of America. Love was quite the shield for him.
Posted by Sarah Snow at Saturday, November 21, 2020