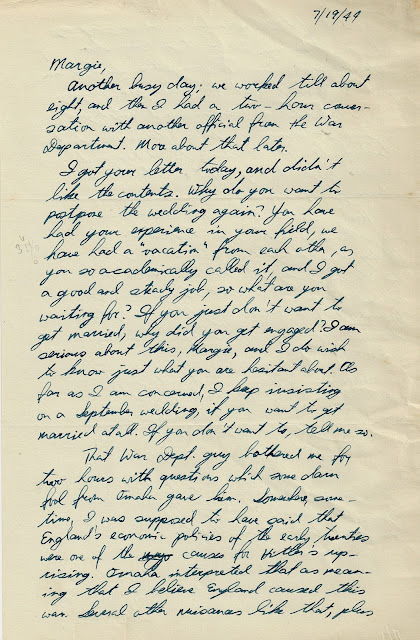 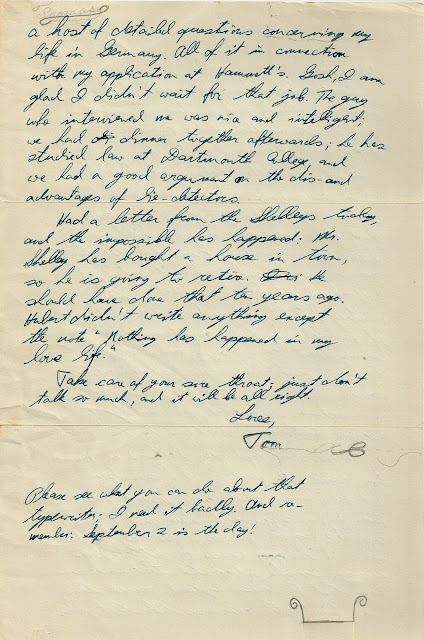 Letter from Opa to Grandmother, July 19, 1944.
Transcription:
7/19/44
Margie,
Another busy day; we worked till about eight, and then I had a two-hour conversation with another official from the War Department. More about that later.
I got your letter today, and I didn't like the contents. Why do you want to postpone the wedding again? You have had your experience in your field, we have had a "vacation" from each other, as you so academically called it, and I got a good and steady job, so what are you waiting for? If you just don't want to get married, why did you get engaged? I am serious about this, Margie, and I do wish to know just what you are hesitant about. As far as I am concerned, I keep insisting on a September wedding, if you want to get married at all. If you don't want to, tell me so.
The War Dept. guy bothered me for two hours with questions which some darn fool from Omaha gave him. Somewhere, some time, I was supposed to have said that England's economic policies of the early twenties were one of the causes for Hitler's uprising. Omaha interpreted that as meaning that I believe England caused this war. Several other nuisances like that, plus a host of detailed questions concerning my life in Germany. All of it in connection with my application at Hammett's. Gosh, I am glad I didn't wait for that job. The guy who interviewed me was nice and intelligent; we had dinner together afterwards; he has studied law at Dartmouth College, and we had a good argument on the dis-and advantages of lie-detectors.
Had a letter from the Shelley's today, and the impossible has happened. Mr. Shelley has bought a house in towns he is going to retire. He should have done that ten years ago. Hubert didn't write anything except the note "nothing has happened in my love life."
Take care of your sore throat; just don't talk so much, and it will be all right.
Love,
Tom.
Please see what you can do about the typewriter; I need it badly. And remember: September 2 is the day!
Opa writes a very nice, normal letter with a bit of a whiplash in the middle. He talks about work, about a conversation with the war department, the Shelley's retirement plans, oh, and whether or not Grandmother wants to marry him.
Let's start with the easy topics. Work is about the same. His conversations with the War Department, I forgot, were mostly connected with his job application to the companies that were heavily involved in producing for the War Department. He has to be fully vetted to work for these companies, else he trade secrets with the enemy. It's interesting, as I'm pretty sure there were bona-fide Nazis who were put on pretty top-secret war efforts. They were top in their field, so if they gave their brains to the American effort, it didn't seem to be as important if they used to be Nazis. Opa is in that cliche position where the stakes are so low they end up investigating him to the fullest extent.
I appreciated that Opa was empathetic to the interviewer, even eating dinner with him after the interview. He didn't shoot the messenger, but understood that this man was instructed to ask the questions. Opa would have been decent at diplomacy work, he seems to be able to connect and find common ground with so many people. This interview likely prepared him a bit for the McCarthy era to follow.
The Shelley's, the family he stayed with and worked for in McPherson College, is finally retiring from farm life and settling in town. I love this image, as I didn't really think farmers retired. I love the idea that retirement means they get to move closer to the town center, connecting with their community, and leaving their toil. Poor Hubert, the son who Opa befriended, he doesn't seem to be having much luck in love. But don't worry, I have the self-published autobiography that he and his wife later published of their love story, which is so lovely. Love is coming to Hubert soon.
Now for the whiplash. I imagine Grandmother was a little startled by Opa's paragraph on their wedding date. Maybe not surprised so much as not expecting him to put it so blatantly in the middle of his other-wise well-mannered letter. Opa most definitely has a point. I think they have not quite figured out how to communicate effectively, but I can't blame them. They're young, but they're also communicating via letters. Opa basically calls Grandmother out and asks her point-blank "do you want to get married?" I'm very much looking forward to Grandmother's response when she can no longer hide behind suggestions and postponement. What is her concern? I know Opa is upset, but I also appreciate that he's asking and clarifying. He obviously doesn't want to get married to a hesitant bride.
Posted by Sarah Snow at Wednesday, November 25, 2020