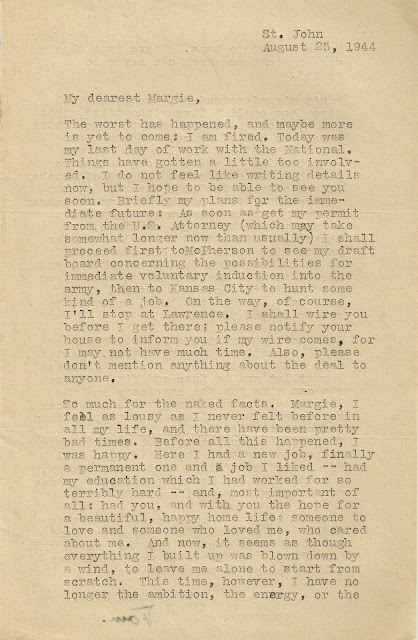 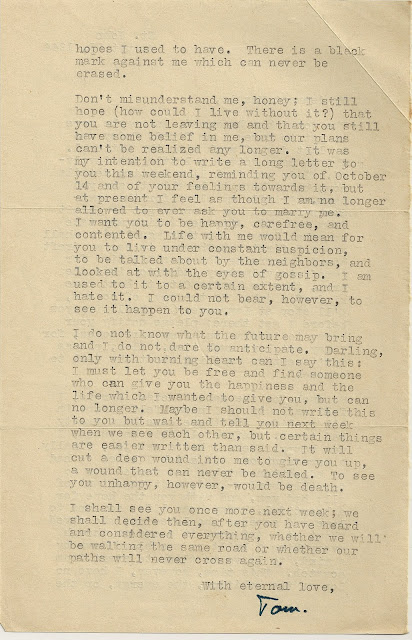 Letter from Opa to Grandmother, August 25, 1944.
Transcription:
St. John
August 25, 1944
My dearest Margie,
The worst has happened, and maybe more is yet to come: I am fired. Today was my last day of work with the National. Things have gotten a little too involved. I do not feel like writing details now, but I hope to be able to see you soon. Briefly my plans for the immediate future: As soon as I get my permit from the U.S. Attorney (which may take somewhat longer now than usually) I shall proceed first to McPherson to see my draft board concerning the possibilities for immediate voluntary induction into the army, then to Kansas City to hunt some kind of a job. On the way, of course, I'll stop at Lawrence. I shall wire you before I get there; please notify your house to inform you if my wire comes, for I may not have much time. Also, please don't mention anything about the deal to anyone.
So much for the naked facts. Margie, I feel as lousy as I never felt before in all my life, and there have been plenty of bad times. Before all this happened, I was happy. Here I had a new job, finally a permanent one and a job I liked -- had my education which I had worked for so terribly hard -- and, most important of all: had you, and with you the hope for a beautiful, happy home life; someone to love and someone who love me, who cared about me. And now, it seems as though everything I built up was blown down by a wind, to leave me alone to start from scratch. This time, however, I have no longer the ambition, the energy, or the hopes I used to have. There is a black mark against me which can never be erased.
Don't misunderstand me, honey: I still hope (how could I live without it?) that you are not leaving me and that you still have some belief in me, but our plans can't be realized any longer. It was my intention to write a long letter to you this weekend, reminding you of October 14 and of your feelings towards it, but at present I feel as though I am no longer allowed to ever ask you to marry me. I want you to be happy, carefree, and contented. Life with me would mean for you to live under constant suspicion, to be talked about by the neighbors, and looked at with the eyes of gossip. I am used to it to a certain extent, and I hate it. could not bear, however, to see it happen to you.
I do not know what the future may bring and I do not dare to anticipate. Darling, only with a burning heart can I say this: I must let you be free and find someone who can give you the happiness and the life which I wanted to give you, but I can no longer. Maybe I should not write this to you but wait and tell you next week when we see each other, but certain things are easier written than said. It will cut a deep wound into me to give you up, a wound that can never be healed. To see you unhappy, however, would be death.
I shall see you once more next week; we shall decide then after you have heard and considered everything, whether we will be walking the same road or whether our paths will never cross again.
With eternal love,
Tom.
This letter breaks my heart. It is the first time in the whole process from leaving Germany to today that he genuinely loses almost all hope. He's lost his job.

It seems everything I have built up as been blown down by a wind, to leave me alone, to start from scratch.

That is the sum total of humanity's desperation. Destruction by a mere wind, leaving us alone to start from scratch.
This only healing answer to this kind of easy devastation (which is true and extant) is that we are not alone.
Even when we are, we aren't. Someone out there wants to help us. Always. I know this because I know some of these people. Sometimes it's easier to find that person, sometimes we push them away because it hurts too much to believe and hope again.
We need to give ourselves a minute, a day, a month, to recognize and grieve what we've lost. We can do that with others, and then we collect ourselves and build again, like the beautiful stupid humans we are. It's really amazing. Every time I see images of people sweeping up the dust after a hurricane or landslide, I think: how can they do that? They are surrounded by debris and destruction and they are sweeping. How stupid it must feel. But they are not alone. Everyone grabs a broom. And somehow it heals.
It's important to remember that emotions are not fact, but feelings. I don't mean they aren't valid, I just mean they aren't permanent.
It's important to know this because I think part of the reason we are afraid to express our real emotion in real-time is because people respond to it as if it is a fact that persists. We guard ourselves and others against this because it's hard enough to feel the feeling without having to add twenty caveats.
When Opa says there is a black mark against him which will never be erased, that is his most authentic expression of how he is feeling in the moment. He doesn't need someone to convince him that it isn't true. By the time the letter arrives in Grandmother's mailbox, the feeling has already softened, become less burdensome, and maybe even evaporated.
Feeling your emotions and expressing them in real time with an open hand so they can leave when they need to, that's the way to do it. Shutting them down and locking them in a vault- bad idea - you create your own Pandora's box of some super charged emotions. Expressing them and having to defend them over and over to others only creates a groove for that emotion. You're required to keep feeling it in order for it to be real, in order to defend it. The truth is: you don't have to keep feeling something for it to be real. That's what we need to remember.
Emotions are perhaps the most real thing in the world, and because of that, they can't last too long. If they are trapped, they become something else.
The real facts I did learn in this letter, through the lens of Opa's authentic emotion, is that he really loved Grandmother so much that she was both the reason for his holding on to hope, and the reason he might lose it all. I learned that even optimistic and resilient Opa felt like it was too much at times. I learned that this moment, which felt like the biggest tragedy and destruction, created a path which altered the entire course of Opa's life.
I never heard about any of this. These were not the stories Opa chose to share. He talked about his life after this, he talked about his life before this. The important thing was not this hinge, but the opening it allowed.
In this moment in this letter, he doesn't know any of that. All he knows is how fragile life is, how fragile his freedom is, and how deeply in love he is.
He hopes he is not alone, because when he was not alone, he was happy.
Posted by Sarah Snow at Monday, May 31, 2021