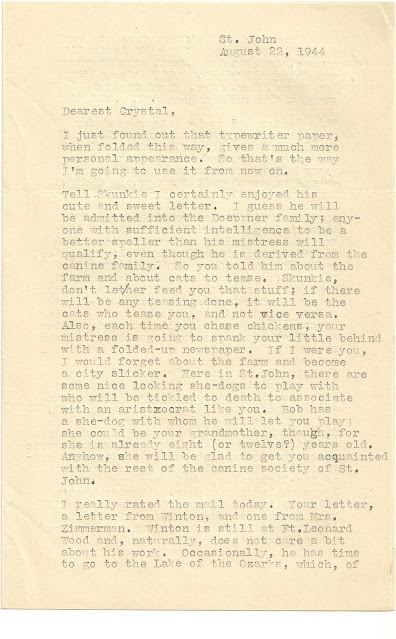 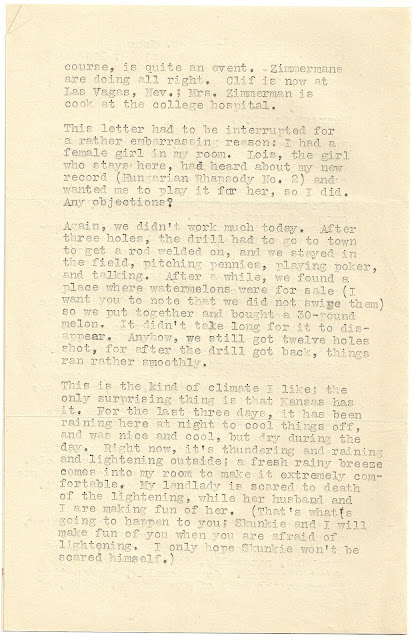 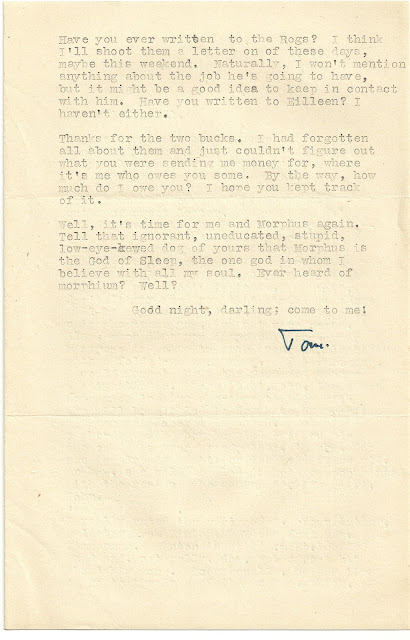 Letter from Opa to Grandmother, August 22, 1944.
Transcription:
St. John
August 22, 1944
Dearest Crystal,
I just found out that typewriter paper, when folded this way, gives a much more personal appearance. So that's the way I'm going to use it from now on.
Tell Skunkie I certainly enjoyed his cute and sweet letter. I guess he will be admitted into the Doeppner family; anyone with sufficient intelligence to be a better speller than his mistress will qualify, even though he is derived from the canine family. So you told him about the farm and about cats to tease. Skunkie, don't let her feed you that stuff; if there will be any teasing done, it will be the cats who tease you, and not vice versa. Also, each time you chase chickens, your mistress is going to spank your little behind with a folded-up newspaper. If I were you, I would forget about the farm and become a city-slicker. Here in St. John, there are some nice looking she-dogs to play with who will be tickled to death to associate with an aristocrat like you. Bob has a she-dog with whom he will let you play; she could be your grandmother, though, for she is already eight (or twelve?) years old. Anyhow, she will be glad to get you acquainted with the rest of the canine society of St. John.
I really rated the mail today. Your letter, a letter from Winton, and one from Mrs. Zimmerman. Winton is still at Ft. Leonard Wood and, naturally, does not care a bit about his work. Occasionally, he has time to go to the Lake of the Ozarks, which, of course, is quite an event. Zimmermans are doing all right. Clif is now at Las Vegas, Nev.; Mrs. Zimmerman is cook at the college hospital.
This letter had to be interrupted for a rather embarrassing reason: I had a female girl in my room. Lois, the girl who says here, had heard about my new record (Hungarian Rhapsody No. 2) and wanted me to play it for her, so I did. Any objections?
Again, we didn't work much today. After three holes, the drill had to go to town to get a rod welded on, and we stayed in the field, pitching pennies, playing poker, and talking. After a while, we found a place where watermelons were for sale (I want you to note that we did not swipe them) so we put together and bought a 30-pound melon. It didn't take long for it to disappear. Anyhow, we still got twelve holes shot, for after the drill got back, things ran rather smoothly.
This is the kind of climate I like; the only surprising thing is that Kansas has it. For the last three days, it has been raining here at night to cool things off, and was nice and cool, but dry during the day. Right now, it's thundering and raining and lightening outside; a fresh rainy breeze comes into my room to make it extremely comfortable. My landlady is scared to death of the lightening, while her husband and I are making fun of her. (That's what's going to happen to you; Skunkie and I will make fun of you when you are afraid of lightening. I only hope Skunkie won't be scared himself.)
Have you ever written to the Rogs? I think I'll shoot them a letter one of these days, maybe this weekend. Naturally, I won't mention anything about the job he's going to have, but it might be a good idea to keep in contact with him. Have you written to Eileen? I haven't either.
Thanks for the two bucks. I had forgotten all about them and just couldn't figure out what you were sending me money for, where it's me who owes you some. By the way, how much do I owe you? I hope you kept track of it.
Well, it's time for me and Morphus again. Tell that ignorant, uneducated, stupid, low-eye-kewed dog of yours that Morphus is the God of Sleep, the one god in whom I believe with all my soul. Ever heard of morphium? Well?
Good night, darling; come to me!
Tom.
When you write letters everyday, you talk about things like 30-lb watermelons, fear of lightning, and morphium.
Something I appreciate about Opa's letters is that he always has something to share, something he wants Grandmother to know, even if it's not important. I think that's a good sign of being in love with someone, when you need them to know the stuff that isn't important.
Also, I'm starting to think that Opa was a cat person (did he have cats growing up??). They never had cats in their married life that I am aware of. And my Dad is strictly anti-cat. He barely tolerates dogs, but cats are a no-go. Kind of funny to think about why your family has one or both- it does seem to be almost a family tradition sometimes. My family's tradition is definitely dogs, and not little ones. (We broke that tradition and got a little one and a giant one just to be weird.)
Posted by Sarah Snow at Wednesday, May 26, 2021