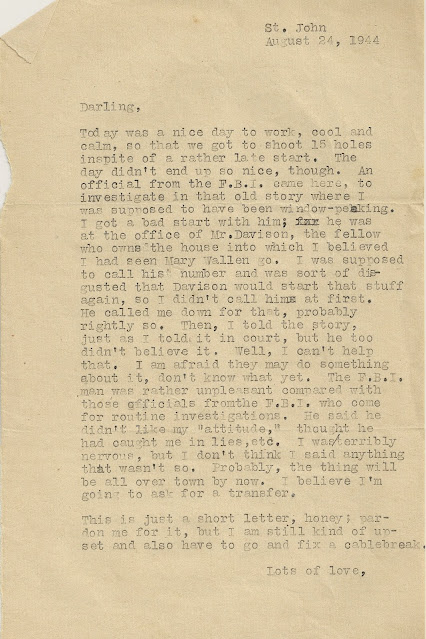 Letter from Opa to Grandmother, August 24, 1944.
Transcription:
St. John
August 24, 1944
Darling,
Today was a nice day to work, cool and calm, so that we got to shoot 15 holes in spite of a rather late start. The day didn't end up so nice, though. An official from the F.B.I. came here, to investigate in that old story where I was supposed to have been window-peeking. I got a bad start with him; he was at the office of Mr. Davison, the fellow who owns the house into which I believed I had seen Mary Wallen go. I was supposed to call his number and was sort of disgusted that Davison would start that stuff again, so I didn't call him at first. He called me down for that, probably rightly so. Then, I told the story, just as I told it in court, but he too didn't believe it. Well, I can't help that. I am afraid they may do something about it, don't know what yet. The F.B.I. man was rather unpleasant compared with those officials from the F.B.I. who come for routine investigations. He said he didn't like my "attitude," thought he had caught me in lies, etc. I was terribly nervous, but I don't think I said anything that wasn't so. Probably, the thing will be all over town by now. I believe I'm going to ask for a transfer.
This is just a short letter, honey; pardon me for it, but I am still kind of upset and also have to go and fix a cable break.
Lots of love,
Opa didn't sign this letter. I don't want to read too much into it, but I think it indicates just how upset he was. He was always the supreme editor, and would read things over before sending it out. This didn't get read over very much, if at all.
This is bad news. The FBI is back, asking questions about the window-peeking incident (which happened July 31). It seems they came at the behest of Mr. Davison (what does he have against Opa?). The FBI officer is not kind to Opa and interrogates him with the assumption of guilt.
Here's my question: how is this still a thing? Opa went to court and was fined for the event. He literally paid his dues. Isn't this some kind of double jeopardy thing? What else could they do? We'll find out.
Posted by Sarah Snow at Friday, May 28, 2021