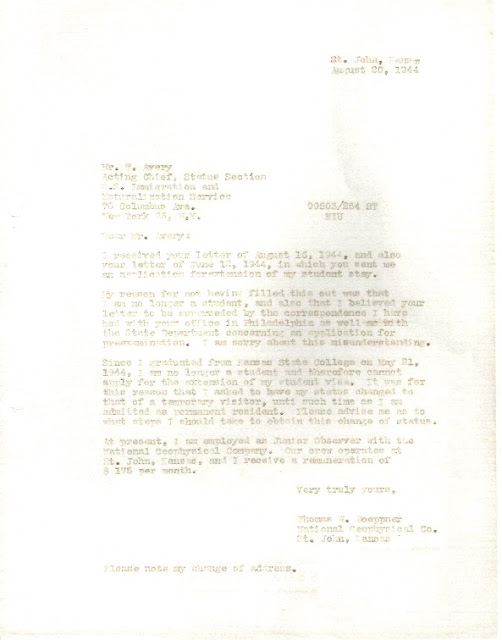 Letter from Opa to Mr T. Avery with INS
Transcription:
St. John, Kansas
August 20, 1944
Mr. T. Avery
Acting Chief, Status Section
U.S. Immigration and
Naturalization Service
70 Columbus Ave.
New York, 23, N.Y.      29503/254 BT NIU
Dear Mr. Avery:
I received your letter of August 16, 1944, and also your letter of June 12, 1944, in which you sent me an application for extension of my student stay.
My reason for not having filled this out was that I am no longer a student, and also that I believed your letter to be superseded by the correspondence I have had with your office in Philadelphia as well as with the State Department concerning an application for preexamination. I am sorry about this misunderstanding.
Since I graduated from Kansas State College on May 21, 1944, I am no longer a student and therefore cannot apply for the extension of my student visa. It was for this reason that I asked to have my status changed to that of temporary visitor, until such a time as I am admitted as permanent resident. Please advise me as to what steps I should take to obtain this change of status.
At present, I am employed as Junior Observer with the National Geophysical Company. Our crew operates at St. John, Kansas, and I received a renumeration of $175 per month.
Very truly yours,
Thomas W. Doeppner
National Geophysical Co.
St. John, Kansas
Please note my change of address. 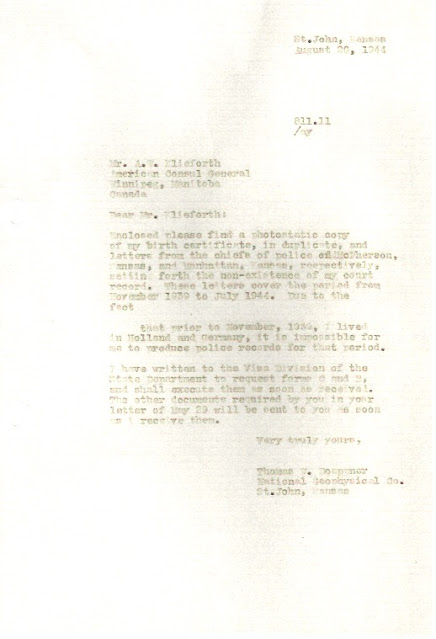 Letter from Opa to Mr. A.W. Elieforth (American Consul, Canada)
Transcription:
St. John, Kansas
August 20, 1944
811.11/ay
Mr. A.W. Elieforth
American Consul General
Winnipeg, Manitoba
Canada
Dear Mr. Elieforth:
Enclosed please find a photostatic copy of my birth certificate, in duplicate, and letters from the chiefs of police of McPherson, Kansas, and Manhattan, Kansas, respectively, setting forth the non-existence of my court record. These letters cover the period from November 1939 to July 1944. Due to the fact that prior to November 1939, I lived in Holland and Germany, it is impossible for me to produce police records for that period.
I have written to the Visa Division of the State Department to request forms C and B, and shall execute them as soon as received. The other documents required by you in your letter of May 29 will be sent to you as soon as I receive them.
Very truly yours,
Thomas W. Doeppner
National Geophysical Co.
St. John, Kansas
Ah, diplomacy.
In the first letter, Opa writes to the INS to communicate kindly, but repetitively to make sure the point is clear, that he is NOT A STUDENT anymore. He writes the phrase "I am no longer a student" twice in this short letter. And yet, I'm still not sure he won't get a renewal application for his Student Visa.
Meanwhile, in the second letter Opa skirts the issue by providing police records for the entire time (except the last month or so) of his clean court time in the U.S. He distracts by saying the previous time he cannot prove because, well, obviously the war. And he does not draw attention to the fact that he does not have a police chief report for the town he currently lives in.
Clever.
If you've been keeping up, the incident that happened to Opa where he was (falsely) accused of being a peeping Tom (and charged for it), has been conveniently left off this report to the American Consul in Canada. I don't blame him. He's not technically lying, and he's desperately trying to be an American for all the right reasons.
I give him a pass, and an A+ in diplomacy.
Posted by Sarah Snow at Thursday, May 20, 2021