August 21, 1944: Inconsistency I Will Never Understand 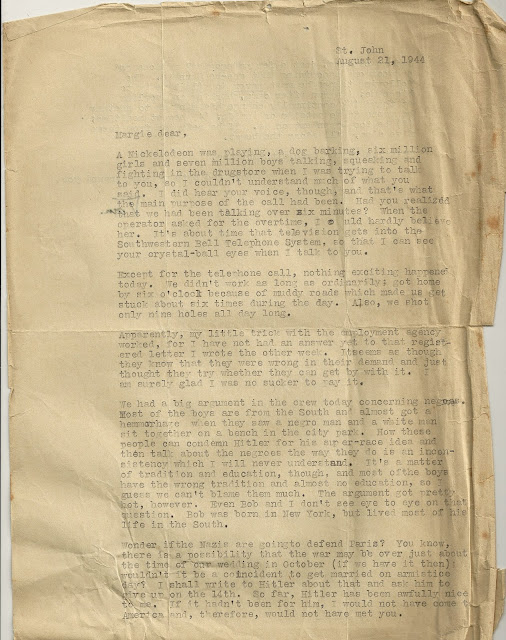 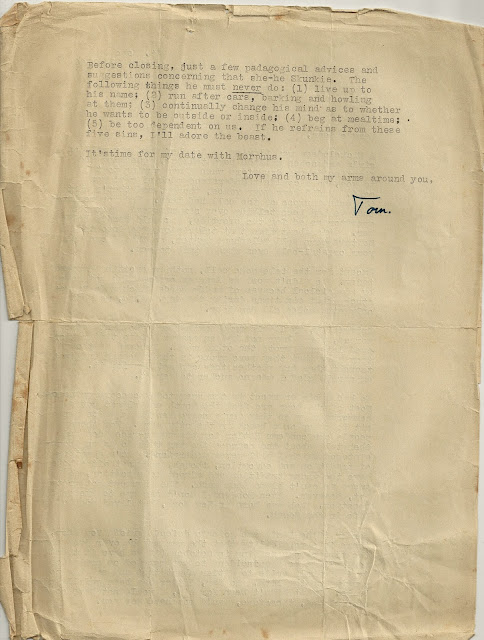 Letter from Opa to Grandmother, August 21, 1944.
Transcription:
St. John
August 21, 1944
Margie dear,
A Nickelodeon was playing, a dog barking, six million girls and seven million boys talking, squeaking and fighting in the drugstore when I was trying to talk to you, so I couldn't understand much of what you said. I did hear your voice, though, and that's what the main purpose of the call had been. Had you realized that we had been talking over six minutes? When the operator asked for the overtime, I could hardly believe her. It's about time that television gets into the Southwestern Bell Telephone System, so that I can see your crystal-ball eyes when I talk to you.
Except for the telephone call, nothing exciting happened today. We didn't work as long as ordinarily; got home by six o'clock because of muddy roads which made us get stuck about six times during the day. Also, we shot only nine holes all day long.
Apparently, my little trick with the employment agency worked, for I have not had an answer yet to that registered letter I wrote the other week. It seems as though they know that they were wrong in their demand and just thought they try whether they can get by with it. I am surely glad I was no sucker to pay it.
We had a big argument in the crew today concerning negroes. Most of the boys are from the south and almost got a hemmorhage when they saw a negro man and a white man sit together on a bench in the city park. How these people can condemn Hitler for his super-race idea and then talk about the negroes the way they do is an inconsistency which I will never understand. It's a matter of tradition and education, though, and most of the boys have the wrong tradition and almost no education, so I guess we can't blame them much. The argument got pretty hot, however. Even Bob and I don't see eye to eye on that question. Bob was born in New York, but lived most of his life in the South.
Wonder if the Nazis are going to defend Paris? You know, there is a possibility that the war may be over just about the time of our wedding in October (if we have it then): wouldn't it be a coincident to get married on armistice day? I shall write to Hitler about that and ask him to give up on the 14th. So far, Hitler has been awfully nice to me. If it hadn't been for him, I would not have come to America and, therefore, would not have met you.
Before closing, just a few pedagogical advices and suggestions concerning that she-he Skunkie. The following things he must never do: (1) live up to his name; (2) run after cars, barking and howling at them; (3) continuously change his mind as to whether he wants to be outside or inside; (4) beg at mealtime; (5) be too dependent on us. If he refrains from these five sins, I'll adore the beast.
It's time for my date with Morphus.
Love and both my arms around you.
Tom.
I was trying to remember if Opa did ever see the ease with which technology allowed face-to-face phone calls. I'm sure it was up-and-coming technology, but he did not see the likes of what we have now with smart phones and computers allowing us to instantly see and hear our loved ones. I can't imagine making a phone call with a pay phone in a crowded place. With my hearing loss, there is no way I would have been able to do that. I'm so grateful for the technology we have today!
Life is weird. We wish and hope that tragedy and disaster never happen, and yet so many of us are alive today because of disaster. It's hard to try to make anything all good or all bad.
Covid has been an absolute disaster at globally devastating levels. But I know I would be lying if I said that I didn't glean something good from the time we had during our quarantine. It feels evil to say that. Just like it felt evil to read Opa's words that Hitler had been nice to him because he was able to meet Grandmother. It doesn't do us much good to try to untangle the web or trace a pure thread from each good thing to each other good thing. Goodness always shows up. No matter how evil the tapestry, something beautiful always seems to make its way through. Not because the disaster was good for us, but because good is always peeking through everywhere, and won't stop just because something isn't perfect. That gives me hope. Maybe this is what is meant by the biblical phrase "light pierces the dark."
I appreciate that Opa had his time with the Quakers in Berlin, where he learned about apartheid in South Africa and the racism of the United States. He was able to recognize the hypocrisy of those who condemned Hitler and still held themselves as superior to Black people. It makes me grateful that he was a voice of disruption when that Kansas crew could not comprehend a Black man sitting with a white man.
There are still inconsistencies which I will never understand, and I hope I have the courage to be the voice of disruption.
Posted by Sarah Snow at Monday, May 24, 2021