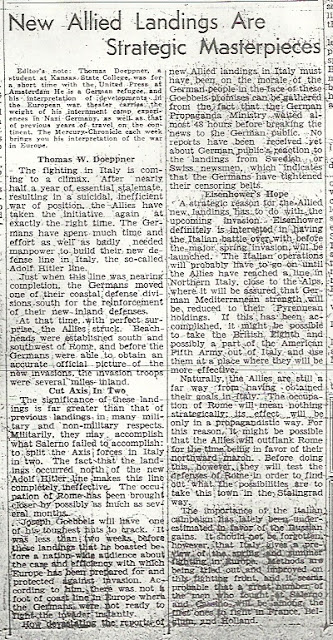 Article by Opa for the Manhattan, Kansas Newspaper: The Mercury Chronicle

Editor's note: Thomas Doeppner, a student at Kansas State College, was for a short time with the United Press at Amsterdam. He s a German refugee, and his interpretation of developments in the European war theatre carries the weight of his internment camp experiences in Nazi Germany, as well as that of previous years of travel on the continent. The Mercury-Chronicle each week brings you his interpretations of the war in Europe.

The fighting in Italy is coming to a climax. After nearly half a year of essential stalemate, resulting in a suicidal, inefficient war of position, the Allies have taken the initiative again at exactly the right time. The Germans have spent much time and effort as well as badly needed manpower to build their new defense line in Italy, the so-called Adolf Hitler line.

Just when this line was nearing completion, the Germans moved one of their coastal defense divisions south for the reinforcement of their new inland defenses.

At that time, with perfect surprise, the Allies struck. Beach-heads were established south and southwest of Rome, and before the Germans were able to obtain an accurate official picture of the new invasions, the invasion troops were several miles inland.

The significance of these landings is far greater than that of previous landings in many military and non-military respects. Militarily, they may accomplish what Salerno failed to accomplish: to split the Axis forces in Italy in two. The fact that the landings occurred north of the new Adolf Hitler line makes this line completely ineffective. The occupation of Rome as been brought closer by possibly as much as several months.

Joseph Goebbels will have one of his toughest nuts to crack. It was less than two weeks before these landings that he boasted before a nation-wide audience about the care and efficiency with which Europe has been prepared for and protected against an invasion. According to him, there was not a foot of coastline in Europe where the Germans were not ready to fight the invader instantly.

How devastating the reports of new Allied landings in Italy must have been on the morale of the German people in the face of these Goebbels promises can be gathered from the fact that the German Propaganda Ministry waited almost 48 hours before breaking the news to the German public. No reports have been received yet about German public reaction to the landings from Swedish or Swiss newsmen, which indicates that the Germans have tightened their censoring belts.

A strategic reason for the Allied new landings has to do with the upcoming invasion. Eisenhower definitely is interested in having the Italian battle over with before the major spring invasion will be launched. The Italian operations will probably have to go on until the Allies have reached a line in Northern Italy, close to the Alps, where it will be assured that German Mediterranean strength will be reduced to their Pyrennean holdings. If this has been accomplished, it might be possible to take the British Eight and possibly part of the American Fifth Army out of Italy and use them at a place where they will be more effective.

Naturally, the Allies are still a far way from having obtained their goals in Italy. The occupation of Rome will mean nothing strategically; its effect will be only in a propagandistic way. For this reason, it might be possible that the Allies will outflank Rome for the time being in favor of their northward march. Before doing this, however, they will test the defenses of Rome in order to find out what the possibilities are to take this town in the Stalingrad way.

The importance of the Italian campaign has lately been underestimated in favor of the Russian gains. It should not be forgotten, however, that Italy gives a preview of the spring and summer fighting in Europe. Methods are being tried out and improved on this fighting front, and it seems probable that a great number of the men who fought at Salerno and ?? will be among the first ones to fight in France, Belgium, and Holland.

I feel like I need to mention this caveat every handful of articles by Opa: that introduction is full of things we cannot prove. The best guess is that they are hyperbole of real events, or at the very least the editor's attempt to validate a young German writing editorials about the war. We know that Opa escaped Germany and spent time with his Dad at the paper in Amsterdam. We don't know what his time looked like, if he was in fact interned in a camp, and how extensive his "travel" around the continent really was as a high schooler.

Now to his article, this episode in military history was quite unknown to me, and as Opa pointed out, it seems that many people weren't super attentive to the Italian front.

So of course, I did a little research. And as I should always say- when I do "a little" research, it usually means that I've gone online to some reputable source to dig a little deeper. What it doesn't mean is that I've exhausted all my sources. There is a good amount of research in this blog that is very thorough- but when I'm checking into battle data, I take the wide-scope approach and hope that if I have bad data, someone will call me out on it. I do try to make sure I'm looking at reputable sources. Sorry- that was another long caveat.

The battle or "surprise" Allied advance that Opa speaks so cavalierly of appears to be the Battle of Monte Cassino in Italy. What I've learned is that Opa over-simplified a bit, and also called the game before it was over. He alludes to a tough "war of position" that created a sort of stalemate on the Italian front. He was right about that, and upon closer investigation I realized just how much of a struggle it was. The irony is that the reason it was so difficult was because the Germans were doing a good job of holding their defensive line. Opa underplays that by making it sound like the troops were just playing a dangerous and chaotic game of tag where no one wins. But the Germans were holding their ground.

Then Opa compliments the Allies and writes that at just the perfect time, the Allies strike and surprise the weak link of the German defensive line. Well, sort of. The Allies do take advantage of a weaker defensive line (troops were moved inland), but it wasn't easy. Which leads me to believe that the Germans knew what they were doing, that they believed they had the ability to hold the line and spare some troops to go elsewhere. And they kind of did, at least for a bit.

The battle that ensued was later called the "Stalingrad of Italy." For reference, the battle of Stalingrad is regarded as the turning point in the war when the Allies gained the upper hand. Also, the casualties are unfathomable: 800,000 on the Axis side, over 1,140,00 on the Allied side (Russian soldiers and civilians). It was not an easy fight. So in Italy, the surprise offensive move by the Allies into Germany's super tough defensive line- was not easy or painless. The mortality rate was high on both sides, as of the writing of this article, the Allies had a fragile upper-hand. Later there would be a second battle of Monte Cassino, where the Germans would almost win.

Something else I found fascinating in reading about these battles was the absolute diversity on the Allied side. There were troops from the US (specifically a Texas division), Australia, England, Morocco, France, Nepal, India, Algeria, New Zealand, and I'm sure places I missed. In the second phase of the battle there is special mention of the Ghurkas. I had never heard of them, but apparently they are part of a super elite military fighter that still exist today. If you google them, you'll find they are assigned to guard some of the most important political meet-ups (like say, the upcoming meeting that might happen between the US and N. Korea).

The sheer coordination of all these moving parts astounds me. I can see why they call it the war "theatre." The folks calling the shots are playing a wicked game of "choose your own adventure" with human lives as moving pawns on the world's stage. The smartest one gets the best story, and hopes that there are as few surprises as possible. But in any adventure, people definitely die.

Opa teases the Germans in this article about how they must be walking around with their tails between their legs about this breaking of the defensive line. We know because of the gift of hindsight that he speaks a little too soon, even though in the battle the eventual victory was still ours.

However, I'm starting to taste some Allied propaganda in his articles, and though I understand the purpose of optimism and bragging in a war, I'm a teensy bit disappointed. I'm not exactly sure why. I guess because I feel like he is buying into the whole "us and them" war rah rah rah narrative. Even though he was a "them"- and knows that Germans are not all Nazis. His friends are likely dying on the warfront in Nazi uniform, with no choice to do otherwise. He may have found a way out, but he was incredibly lucky. Just a few years ago he was struggling with Quaker ideals, telling the US government he would never serve in the military. I know people change (and are certainly allowed to) but part of me misses the softer Opa. War doesn't allow us to stay soft, does it?

Opa's article simplifies a complicated battle in a complicated war. I hope Opa does not over-simplify his own nuanced and complicated self in the meantime. The narrative of winners and losers helps during the game, but afterward we're all in the same world and we have to figure out a way to be together. It's complicated.
Posted by Sarah Snow at Thursday, June 07, 2018