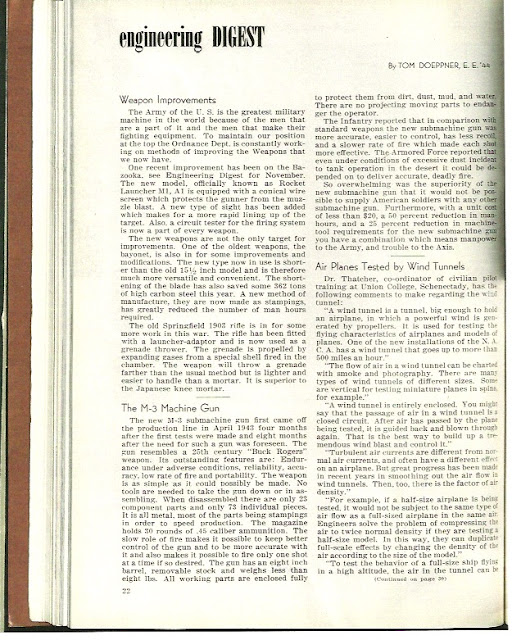 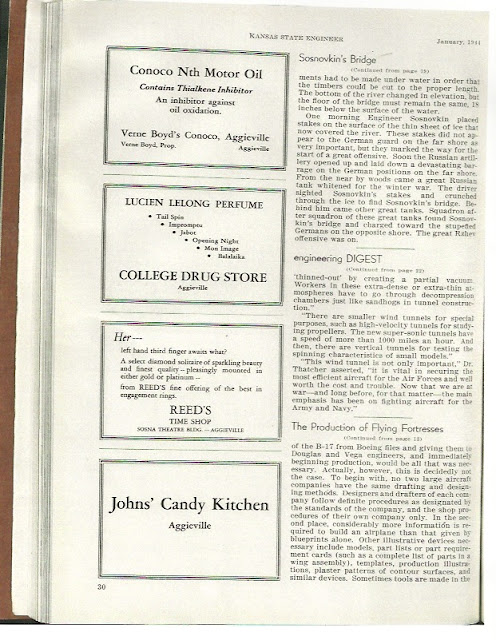 Article by Opa in the Engineer Magazine of Kansas State College

The Army of the U.S. is the greatest military machine in the world because of the men that are a part of it and the men that make their fighting equipment. To maintain our position at the top the Ordinance Dept. is constantly working on methods of improving the Weapons that we now have.

One recent improvement has been on the Bazooka, see Engineering Digest for November. The new model, officially known as Rocket Launcher M1, A1 is equipped with a conical wire screen which protects the gunner from the muzzle blast. A new type of sight has been added which makes for a more rapid lining up of the target. Also, a circuit tester for the firing system is now a part of every weapon.

The new weapons are not the only target for improvements. One of the oldest weapons, the bayonet, is also in for some improvements and modifications. The new type now in use s shorter than the old 15 1/2 inch model and is therefore much more versatile and convenient. The shortening of the blade has also saved some 362 tons of high carbon steel this year. A new method of manufacture, they are now made as stampings, has greatly reduced the number of man hours required.

The old Springfield 1903 rifle is in for some work in this war. The rifle has been fitted with a launcher-adaptor and is now used as a grenade thrower. The grenade is propelled by expanding gases from a special shell fired in the chamber. The weapon will throw a grenade faster than the usual method but is lighter and easier to handle than a mortar. It is superior to the Japanese knee mortar.

The new M-3 submachine gun first came off the production line in April 1943 four months after the first tests were made and eight months after the need for such a gun was foreseen. The gun resembles a 25th century "Buck Rogers" weapon. Its outstanding features are: Endurance under adverse conditions, reliability, accuracy, low rate of fire and portability. The weapon is as simple as it could possibly be made. No tools are needed to take the gun down or in assembling. When disassembled there are only 23 component parts and only 73 individual pieces. It is all metal, most of the parts being stampings in order to speed production. The magazine holds 30 rounds of .45 caliber ammunition. The slow role of fire makes it possible to keep better control of the gun ad to be more accurate with it and also makes it possible to fire only one shot at a time if so desired. The gun as an eight inch barrel, removable stock and weighs less than eight lbs. All working parts are enclosed fully to protect them from dirt, dust, mud, and water. There are no projecting moving parts to endanger the operator.

The infantry reported that in comparison with standard weapons the new submachine gun was more accurate, easier to control, has less recoil, and a slower rate of fire which made each shot more effective. The Armored Force reported that even under conditions of excessive dust incident to tank operations in the desert it could be depended on to delver accurate, deadly fire.

Dr. Thatcher, co-ordinator of civilian pilot training at Union College, Schenectady, has the following comments to make regarding the wind tunnel:

"A wind tunnel is a tunnel, big enough to hold an airplane, in which a powerful wind is generated by propellers. It is used for testing the flying characteristics of airplane and models of planes. One of the new installations of the N.A.C.A. has a wind tunnel that goes up to more than 500 miles an hour."

"The flow of air in a wind tunnel can be charted with smoke and photography. There are many types of wind tunnels of different sizes. Some are vertical for testing miniature planes in spins, for example."

"A wind tunnel is entirely enclosed. You might say that the passage of air in a wind tunnel is a closed circuit. After air has passed by the plane being tested, it is guided back and blown through again. That is the best way to build up a tremendous wind blast and control it."

"Turbulent air currents are different from normal air currents, and often have a different effect on an airplane. But great progress has been made in recent years in smoothing out the air flow in wind tunnels. Then, too, there is the factor of air density."

"For example, if a half-size airplane is being tested, it would not be subject to the same type of air flow as a full-sized airplane in the same air. Engineers solve the problem of compressing the air to twice normal density if they are testing a half-size model. In this way, they can duplicate full-scale effects by changing the density of the air according to the size of the model."

"To test the behavior of a full-size ship flying in a high altitude, the air in the tunnel can be 'thinned-out' by creating a partial vacuum. Workers in these extra-dense or extra-thin atmospheres have to go through decompression chambers just like sandhogs in tunnel construction."

"There are smaller wind tunnels for special purposes, such as high velocity tunnels for studying propellers. The new super-sonic tunnels have a speed of more than 1000 miles an hour. And then, there are vertical tunnels for testing the spinning characteristics of small models."

"This wind tunnel is not only important," Dr. Thatcher asserted, "it is vital in securing the most efficient aircraft for the Air Fares and well worth the cost and trouble. Now that we are at war - and long before, for that matter - the main emphasis has been on fighting aircraft for the Army and Navy."

My favorite advertisement is definitely the one that simply says:

I mean, what more do you need to know - it's a kitchen full of candy. Ha!

Ok- the article. I'm a little bit laughing at Opa's skill in quoting Dr. Thatcher for close to a half of his entire article. I imagine he took one look at Dr. Thatcher's words and thought: "I can't really improve on this, I'll just let him talk about it." Dr. Thatcher had lots to say and I started thinking of that teacher in Charlie Brown "wah-wah-wah wah". It is interesting information, but quite a dry delivery. But it's efficient, as well as Opa's method of quoting it verbatim.

I actually have some experience with wind tunnels, sort of. My Dad worked as a helicopter test pilot for the Air Force and then as a civilian before retiring a few years ago. One of the few times I got to witness his work was when he and his crew used the climactic chamber in the panhandle of Florida. It was a wind tunnel, but with the added benefit of snow. The chamber was able to mock winter weather, and in the summer in Florida when I visited- it was kind of a wild experience. Testing a helicopter in pretend snow while chained to the ground is a much more efficient and safe way to work out some of the kinks in the engineering. So- I agree with Dr. Thatcher- wind tunnels are a big deal. And pretty impressive to see.

Opa's article was actually disturbing me before I got distracted by the long quote on wind tunnels. It is a laundry list of killing machines, with a sterile observation of the ease and efficiency with which it killed. All of these fancy new weapons have only one goal: kill people. I know, I know, they protect people, "just war" and all that, I know. It still stinks. War is still terrible, and the nonchalant way of talking about killing people more efficiently just chilled me.

It's January, 1944. Opa is talking about new weapons and no one has a clue that one of the most horrific and destructive new weapons, the atomic bomb, is on the horizon. Shortening a bayonet to save steel may seem clever, but an explosion that decimates a city? Unheard of. It shows what happens with the weapons race if we keep going. Ultimately we all have the power and ability to kill all life on earth. Can we stop now, please?
Posted by Sarah Snow at Friday, June 08, 2018