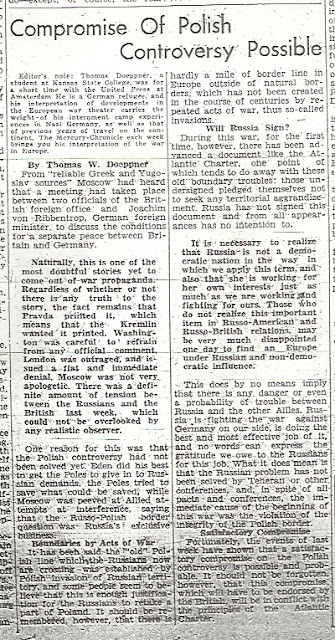 Article by Opa for the Manhattan, Kansas Newspaper "The Mercury Chronicle"

Editor’s Note: Thomas Doeppner, a student at Kansas State College, was for a short time with the United Press at Amsterdam. He is a German refugee and his Interpretation of developments in the European war theater carry the weight of his internment camp experience in Nazi Germany, as well as that of previous years of travel on the continent. The Mercury-Chronicle each week brings you his interpretation of the war in Europe.

From “reliable Greek and Yugoslav sources”, Moscow had heard that a meeting had taken place between two officials of the British foreign office and Joachim von Ribbentrop, German foreign minister, to discuss the conditions for a separate peace between Britain and Germany.

Naturally, this is one of the most doubtful stories yet to come out of war propaganda. Regardless of whether or not there is any truth to the story, the fact remains that Pravda printed it, which means that the Kremlin wanted it printed. Washington was careful to refrain from any official comment, London was outraged and issued a flat and immediate denial. Moscow was not very apologetic. There was a definite amount of tension between the Russians and the British last week, which could not be overlooked by any realistic observer.

One reason for this was that the Polish controversy had not been solved yet: Eden did his best to get the Poles to give in to Russian demands, the Poles tried to save what could be saved, while Moscow was peeved at Allied attempts at interference, saying that the Russo-Polish border question was Russia’s exclusive business.

Boundaries by Acts of War

It has been said the “old” Polish line which the Russians now are crossing was established by Polish invasion of Russian territory, and some people seem to believe that this is enough justification for the Russians to retake a part of Poland. It should be remembered, however, that there is hardly a mile of border line in Europe outside of natural borders, which has not been created in the course of centuries by repeated acts of war, thus so-called invasions.

During this war, for the first time, however, there has been advanced a document like the Atlantic Charter, one point of which tends to do away with these old boundary troubles: those undersigned pledged themselves not to seek any territorial aggrandizement. Russia has not signed this document and from all appearances has no intentions to.

It is necessary to realize that Russia is not a democratic nation in the way in which we apply this term and also that she is working for her own interests just as much as we are working and fighting for ours. Those who do not realize this important item in Russo-American and Russo-British relations may be very much disappointed one day to find an Europe under Russian and non-democratic influence.

This does by no means imply that there is any danger or even a probability of trouble between Russia and the other Allies. Russia is fighting the war against Germany on our side, is doing the best and most effective job of it and no words can express the gratitude we owe to the Russians for the job. What it does mean is that the Russian problem has not been solved by Teheran or other conferences, and, in spite of all pacts and conferences, the immediate cause of the beginning of this war was the violation of the integrity of the Polish border.

Fortunately, the events of last week have shown that a satisfactory compromise on the Polish controversy is possible and probable. It should not be forgotten, however, that this compromise which will have to be endorsed by the British, will be in conflict with the principles of the Atlantic Charter.

Oh Poland. You knew, they knew, everyone knew. But you hoped. It sounds like Russia doesn't care what anybody thinks about what they should do. And that's pretty much what everyone expected. Opa makes a good point, the Allies are grateful for Russia's help (a huge help) in winning the war against the Germans. The unfortunate part is that after being a help, they'll turn back into that communist country that no one really trusts.

Opa even says: remember, they aren't a democracy like we are, and when they have control of half of Europe, it's going to make us uncomfortable. But it seems everyone at this point is shrugging their shoulders about the whole Poland thing. Oh well, it breaks the Atlantic Charter. We'll let Russia draw their borders where it wants. I love when Opa points out just how arbitrary borders really are. When Russia makes the argument that the borders they want to create are the REAL original borders, Opa just jabs at the fallacy of the argument.

I think that the Anglo-American side of the Allies are hoping a truce in the Poland bit will get them some diplomatic leverage in other areas.

In the meantime, Russia simply does not care about your organized diplomacy. If WW2 Russia were a fictional character in a movie, he'd be the villain you love to hate... and hate that you kinda admire.
Posted by Sarah Snow at Wednesday, June 06, 2018