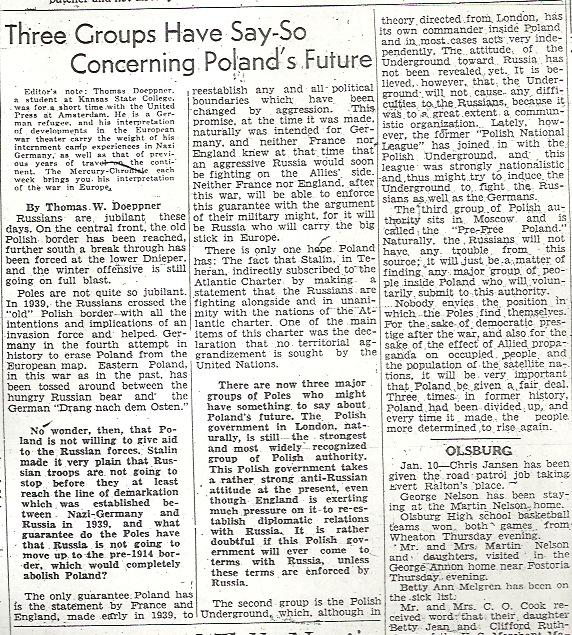 Editor’s Note: Thomas Doeppner, a student at Kansas State College, was for a short time with the United Press at Amsterdam. He is a German refugee and his Interpretation of developments in the European war theater carry the weight of his internment camp experience in Nazi Germany, as well as that of previous years of travel on the continent. The Mercury-Chronicle each week brings you his interpretation of the war in Europe.

Russians are jubilant these days. On the central front, the old Polish border has been reached, further south a break through has been forced at the lower Dnieper and the winter offensive is still going on full blast.

Poles are not quite so jubilant. In 1939, the Russians crossed the “old” Polish border with all the intentions and implications of an invasion force and helped Germany in the fourth attempt in history to erase Poland from the European map. Eastern Poland, in this war as in the past, has been tossed around between the hungry Russian bear and the German “Drang nach dem Osten.” ("Urge for the East")

No wonder, then, that Poland is not willing to give aid to the Russian forces. Stalin made it very plain that Russian troops are not going to stop before they at least reach the line of demarkation which was established between Nazi-Germany and Russia in 1939 and what guarantee do the Poles have that Russia is not going to move up to the pre-1914 border, which would completely abolish Poland?

The only guarantee Poland has is the statement by France and England, made early in 1939, to reestablish any and all political boundaries which have been changed by aggression. This promise, at the time it was made, naturally was intended for Germany, and neither France nor England knew at that time that an aggressive Russia would soon be fighting on the Allies’ side. Neither France nor England, after this war, will be able to enforce this guarantee with the argument of their military might, for it will be Russia who will carry the big stick in Europe.
There is only one hope Poland has: The fact that Stalin, in Teheran, indirectly subscribed to the Atlantic Charter by making a statement that the Russians are fighting alongside and in unanimity with the nations of the Atlantic charter. One of the main items of this charter was the declaration that no territorial aggrandizement is sought by the United Nations.

There are now three major groups of Poles who might have something to say about Poland’s future. The Polish government in London, naturally, is still the strongest and most widely recognized group of Polish authority. This Polish government takes a strong anti-Russian attitude at the present, even though England is exerting much pressure on it to re-establish diplomatic relations with Russia. It is rather doubtful if this Polish government will ever come to terms with Russia, unless these terms are enforced by Russia.

The second group is the Polish Underground, which, although in theory directed from London, has its own commander inside Poland and in most cases acts very independently. The attitude of the Underground toward Russia has not been revealed yet. It is believed, however, that the Underground will not cause any difficulties to the Russians, because it was to a great extent a communistic organization. Lately, however, the former “Polish National League” has joined in with the Polish Underground, and this league was strongly nationalistic and, thus might try to induce the Underground to fight the Russians as well as the Germans.

The third group of Polish authority sits in Moscow and is called the “Pre-Free Poland.” Naturally, the Russians will not have any trouble from this source: it will just be a matter of finding any major group of people inside Poland who will voluntarily submit to this authority.

Nobody envies the position in which the Poles find themselves. For the sake of democratic prestige after the war, and also for the sake of the effect of Allied propaganda on occupied people and the population of the satellite nations, it will be very important that Poland be given a fair deal. Three times in former history, Poland had been divided up, and every time it made the people more determined to rise again.

Everyone is hoping that Russia will behave. Hoping so hard. Poland is at the top of that hoping list. I did a little digging into Poland's history, because it seems like they are just constantly being run over. I know history is a long line of continuing ebbs and flows, but it always seems like Poland is a rag doll used in a tug of war. Opa says himself that they have been "tossed around between the hungry Russian bear and the German “Drang nach dem Osten.” So the question is, even though the Russians are now on the Allied side, is their "liberation" of Poland a true liberation?

That all depends on who you ask, although as Opa's article infers, most of Poland is hesitant.

Poland's geographical location is a double-edged sword. They're one of the borders between the East and West on the European continent. They have access to the ocean, and are strategically placed for Russia and Germany to get a foothold towards the other "side." They are also the home to a large number of Jews, which is unfortunately a liability. As we know now (and the Russians and the Allies will soon learn), Polish Jews have been nearly eradicated, and by the end of the war, there isn't much left to look at in Poland. The location of Poland basically guaranteed their destruction, and this war wasn't the first time it happened.

I remember hearing in history class a little bit about the Anglo-American rush from the west and the Russian rush from the east to get to Berlin first. Even though they were Allies- I think there was sort of a winner of Berlin takes all feeling. Everyone wanted the upper hand in Germany. I don't remember hearing a thing about Poland. I think Poland's fate was sealed long before the Russians graced their borders. Of course the Polish knew this, and when the Soviets began to push in against the Germans, they must have sort of felt "well, it's the lesser of two evils."

Some may have hoped that the Russians were tempered by their alliance to Britain and the US. Maybe Poland would get a chance to be its own country again without any heavy-handed influence from the Russians. Opa deliberates about the groups of Polish influence who might have a part in deciding their outcome after the war. When all is said and done, Poland loses. They get a country, but not a strong one, and eventually they fall into line as a communist state of the Soviets. Poland transitioned back into a democratic nation soon after the fall of communist Soviet Union.

The irony of this article is that Opa and the Polish hope that the agreements reached in the Tehran conference would potentially ensure Poland's independence from Russia after the war, when is essence it seems that they were a bargaining chip for the western allies to get what they wanted elsewhere. Sure Russia, you can draw the Polish border how you want. We get what we want.

Opa says three times Poland was divided up and every time they were compelled to rise up. World War 2 was no different.
Posted by Sarah Snow at Monday, June 04, 2018