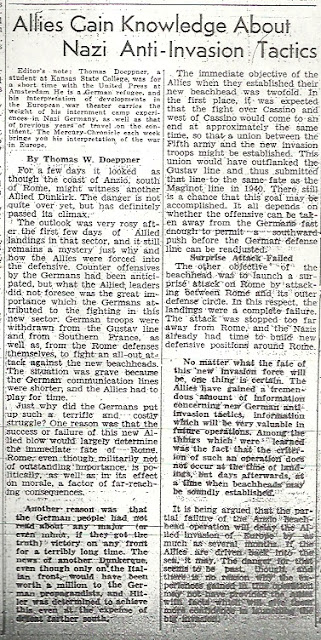 Article by Opa for Manhattan, Kansas newspaper: The Mercury Chronicle

Editor's note: Thomas Doeppner, a student at Kansas State College, was for a short time with the United Press at Amsterdam. He is a German refugee, and his interpretation of developments in the European war theater carries the weight of his internment camp experiences in Nazi Germany, as well as that of previous years of travel on the continent. The Mercury-Chronicle each week brings you his interpretation of the war in Europe.

For a few days it looked as though the coast of Anzio, south of Rome, might witness another Allied Dunkirk. The danger is not quite over yet, but has definitely passed its climax.

The outlook was very rosy after the first few days of Allied landings in that sector, and it still remains a mystery just why and how the Allies were forced into the defensive. Counter offensives by the Germans had been anticipated, but what the Allied leaders did not foresee was the great importance which the Germans attributed to the fighting in this new sector. German troops were withdrawn from the Gustav line and from Southern France, as well as from the Rome defenses themselves, to fight an all-out attack against the new beachheads. The situation was grave because the German communication lines were shorter, and the Allies had to play for time.

Just why did the Germans put up such a terrific and costly struggle? One reason was that the success or failure of this new Allied blow would largely determine the immediate fate of Rome. Rome, even though militarily not of outstanding importance, is politically, as well as in its effect on morale, a factor of far-reaching consequences.

Another reason was that the German people had not read about any major (or even minor, if they got the truth) victory on any front for a terribly long time. The news of another Dunkerque, even though only on the Italian front, would have been worth a million to the German propagandists, and Hitler was determined to achieve this even at the expense of defeat farther south.

The immediate objective of the Allies when they established their new beachhead was twofold. In the first place, it was expected that the fight over Cassino and west of Cassino would come to an end at approximately the same time, so that a union between the 5th army and the new invasion troops might be established. This union would have outflanked the Gustav line and thus submitted that line to the same fate as the Maginot line in 1940. There still is a chance that this goal may be accomplished. It all depends on whether the offensive can be taken away from the Germans fast enough to permit a southward push before the German defense line can be readjusted.

The other objective of the beachhead was to launch a surprise attack on Rome by attacking between Rome and its outer defense circle. In this respect, the landings were a complete failure. The attack was stopped too far away from Rome, and the Nazis already had time to build new defensive positions around Rome.

No matter what the fate of this new invasion force will be, one thing is certain. The Allies have gained a tremendous amount of information concerning new German anti-invasion tactics, information which will be very valuable in future operations. Among the things which were learned was the fact that the criterion of such an operation does not occur at the time of landings, but days afterwards, at a time when beachheads may be soundly established.

It is being argued that the partial failure of the Anzio beachhead operation will delay the Allied invasion of Europe by as much as several months. If the Allies are driven back into the sea, it may. The danger for that seems to be past, though, and there is no reason why the experiences gained in this operation may not have provided the Allies with facts which will give them more confidence in launching the big invasion.

Opa had reported in this article from January 30, '44, a full-scale "Hoorah!" to the victory of the Allied offensive move in Italy. I mention in the blog from that article that he spoke a little too soon or at least simplified the victory. Here it seems he gets the news himself in real time. The victory of this battle was ultimately the Allies, but it was definitely harder than they expected. Opa doesn't mention the geographic (topographic?) reasons why that battle might have been as hard as it was. I remember reading in my research that the Germans had a better handle on the terrain and used it to their advantage. Also, as Opa mentions, the Germans are also not so far from home, supplies, and communication.

This article he references the battle of Dunkirk, in saying that he hopes this doesn't end up like that. There is now a major motion picture about this battle, which happened in 1940 when the Nazis successfully invaded France and the Netherlands. Allied soldiers were backed up to the ocean, and a tremendous effort by military and civilian alike, allowed the soldiers to be evacuated from the shore.

Opa makes the obvious note that just because you land on the shore, doesn't mean the battle is over, you have to be able to hold on to that beach-head and further in to be successful.

The final victory in Italy in this particular battle is referred to as the "Stalingrad" of Italy. I mentioned in the last blog about this battle that this was a victorious battle by the Allies (mainly Russians) that was hard-won with much loss, but was a turning point in the war.

I think it is interesting how other battles are used as markers for comparison. It makes perfect sense, and I wonder if there was a part of the memory of those battles that encouraged the soldiers to either continue with tradition or change it. This is completely a terrible analogy, but as an Auburn graduate, I know that football fans do this with major games. If you've won many years in a row against your rival, you use that as a confidence booster that you'll keep the record going. If you lost in the last year, you are more determined to change the story.

I'm realizing how much the psychology of a war is just as important as the weapons and resources. Of course it's all connected, and some things must be in place, no matter how motivated an army is. However, the whole propaganda piece is a big deal. And I may have said this before, but propaganda isn't in itself a dirty word. I've always thought so- and in some ways it kind of is... but the objective of it is really to encourage people. That encouragement might be for nefarious means, or it might be a pep rally speech. Propaganda is telling a story with animation, to keep people connected and committed to the cause. Propaganda is PR. Every country does it. The problem begins when propaganda replaces facts, and manipulates people to do things that are not in their best interest (or the best interest of the country at large).

Opa's optimism of turning the difficult battle into an opportunity for learning is endearing, and typical. He's also right, the Allies will have some lessons learned from this exercise in humility, which might give them a better chance at this great invasion Opa keeps predicting. Back to the terrible football analogy: if you go into a game thinking there is no way you'll lose, that is a sure-fire way of giving the other team a chance to beat you. There is a thin line between confidence and cockiness; and it is an important one. This hard win might have been the psychological sharpening that the Allies needed to realize that they hadn't quite won the war yet, and there was plenty of work left to do.