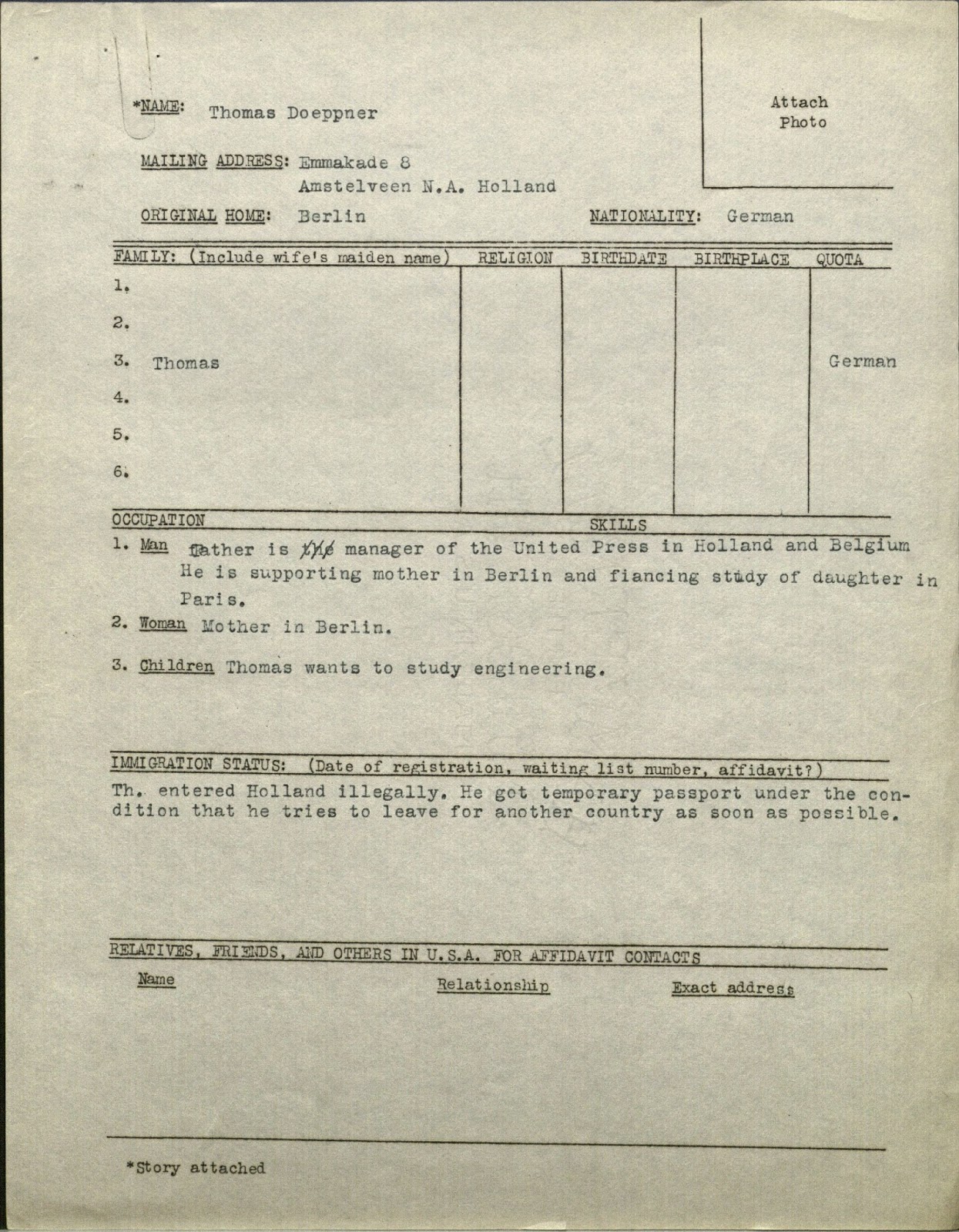 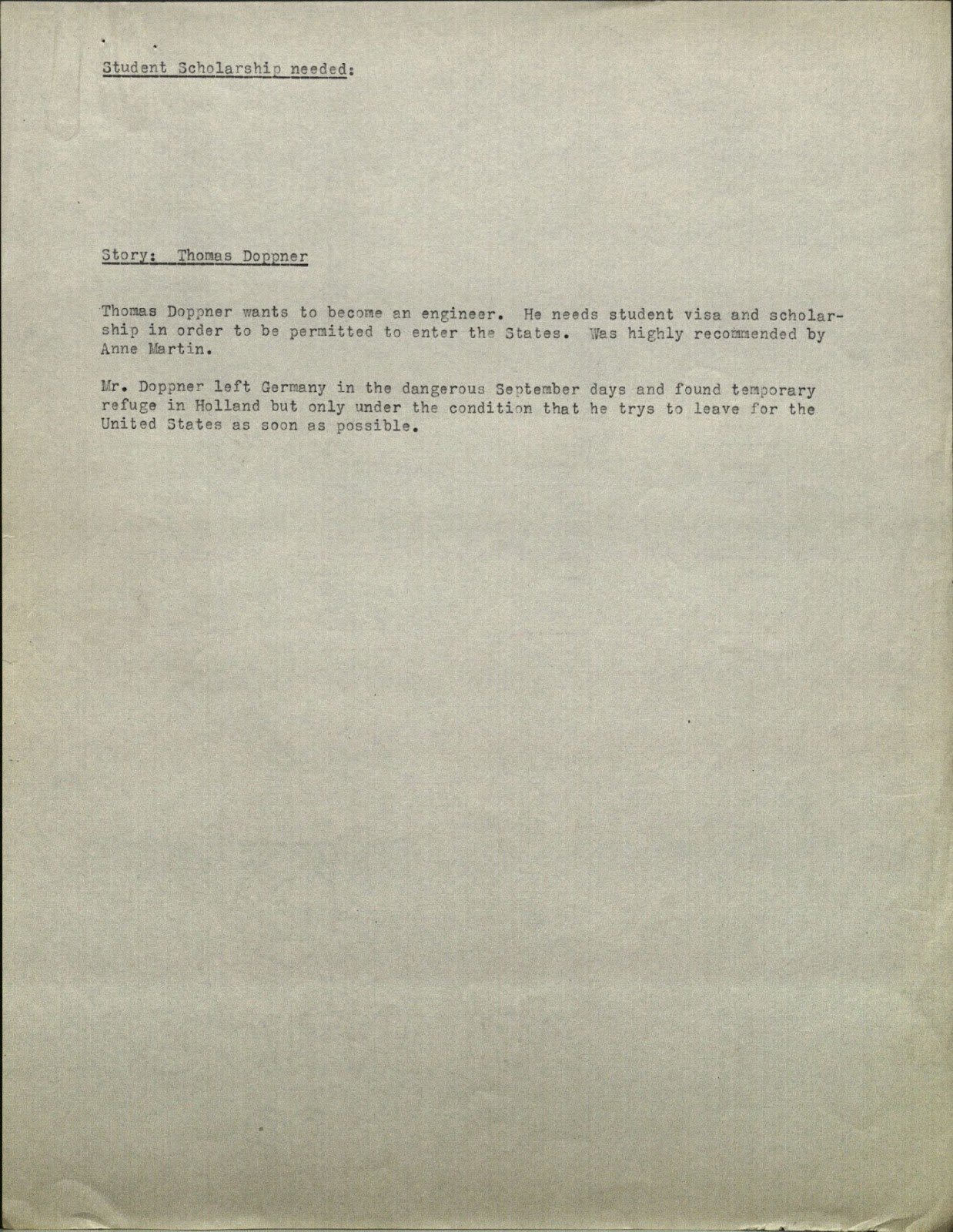 (all they have listed in the chart is): Thomas,
(and under Quota): German

Occupation --  Skills
1) Man  father is manager of the United Press in Holland and Belgium. He is supporting mother in Berlin and financing study of daughter in Paris.

Th. entered Holland illegally. He got temporary passport under the condition that he tries to leave for another country as soon as possible.

Relatives, Friends, and others in USA for affidavit Contacts
(blank)

Thomas Doeppner wants to become an engineer. He needs student visa and scholarship in order to be permitted to enter the States. Was highly recommended by Anne Martin.

Mr. Doppner left Germany in the dangerous September days and found temporary refuge in Holland but only under the condition that he trys to leave for the United States as soon as possible.

We have so many documents and so many sources that it is hard to keep them organized perfectly. My husband Jason has done a fabulous job at keeping them organized thus far, but every now and then we find something that we think… hmm- where does this fit in? This document is one of those pieces. I think that maybe I should have shared it a little earlier but now is just as good a time as ever!

Charlotte Salmon of the American Friends Service Committee was in constant communication with multiple schools who expressed interest in helping refugee students. She needed a way to efficiently give them information about potential refugee students. So anytime in her letters to colleges that she encloses information about Thomas Doeppner, I think this must have been the form she used.

I think a few things about this document are interesting. One, it says that August is a manager in the United Press in Holland. If you have read this blog, you’ll see that August requested his boss to keep his management position a secret when writing a personal recommendation for Opa. So August’s little secret is out. Ha. Second, it says that August is supporting Ella (Opa’s mother)... and we have some clues that that wasn’t entirely accurate. Opa documented in his autobiography that after his parent’s divorce, Ella worked multiple jobs and struggled to make ends meet. These statements in the information form are pretty clearly trying to establish that August is financially responsible for multiple people. Finally, the form states that Opa received a “temporary passport under the condition that he tries to leave for another country as soon as possible.” This is reflected in most of the documentation that we have found (Opa’s letters, memoirs). However, in August’s last letter, he alludes that Opa didn’t have the documentation necessary to apply for a student visa in the USA. What paperwork did Opa have after all? Looks like I’m going to have to dig deeper.


Opa’s “story” is fairly accurate. They state he needs a scholarship, which is what he and Charlotte are currently talking about- whether that is absolutely necessary (he’d like to just get to the USA).

Also it says he left in the dangerous September days, if you remember, this was when the Munich Agreement was being signed. If you read a little material on this crisis, at least for me, at first glance it looks oddly similar to the crisis we're seeing in Crimea. Of course there are differences- but the similarities really struck me. Anytime I see similarities in history- I try to pay better attention.

Something I noticed: no mention of whether Opa was Jewish or not. Technically Opa was “half-Jewish” by Nazi measures. I wonder if they purposely left out any mention of his Jewish background because they thought he might have a better chance at getting out? And in that case… although it was much more difficult in Germany to hide a Jewish background (they had been documented in census gatherings), was it easier to hide it from Americans? If you didn’t have a typical Jewish name (or if you were able to forge a new one), could you perhaps get in to the USA a little easier on a student visa if you had a theoretically welcoming home to go back to? I’m sure I’m not the only one to have thought about this. I was actually a little slow to it- I guess my evil mastermind ideas are not too quick. Ha.
Posted by Sarah Snow at Sunday, December 22, 2013