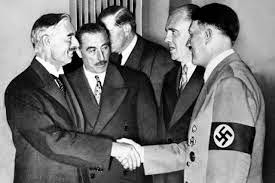 In the blog that follows, Opa mentions an international crisis in September. As you know, Kristallnacht happened in November, but before that, a very public agreement happened. The Munich Agreement was signed on September 29th, 1938. I’ll give you Sarah’s brief description and then include two links.

The Sudetenland crisis­ when Germany adopted parts (and eventually all) of Czechoslovakia. And everyone let them­ because there was an escalating militarization happening (remember this part- we’re going to talk about it again) and war weary Europe really didn’t want to start that again. SO they peace­treatied it up­ with a side of Sudetenland on the altar, a worthy sacrifice. And honestly, I don’t blame them, I really don’t­ with my limited knowledge of the situation­ I can see how the phrase “avoid a world war” was appealing. It is now seen as the bad chess move that ultimately gave Germany a clear and open path to empire­building. There is so much information on this episode, and it is really quite fascinating to think of all the what­if’s. (Czechoslovakia was quite ready to fight and with support may have led the charge on a short and victorious war against Germany, who perhaps wasn’t quite ready yet....) 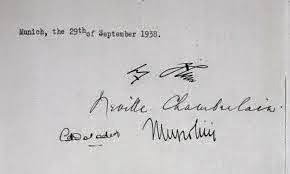 I encourage you to check out the wikipedia page below and research it a little bit, now with the knowledge of a man who was directly affected by it. I love the contextualization of history. If only every history lesson could be rounded out by a collection of memoirs.

Here is the wikipedia page:
http://en.wikipedia.org/wiki/Munich_Agreement

Here is a newsreel at the Holocaust Museum of the four politicians coming together to sign the legislation: