The second of our two AFSC Refugee workers was Hertha Kraus. Hertha was an integral part of the team of people working for the Refugee Committee of the AFSC. Her experience was probably one of the greatest factors into the success of the AFSC’s help to refugees. In the “Quakers and Nazis” book, it says 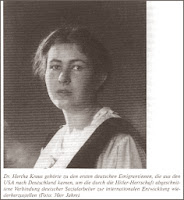 “Hertha Kraus, former municipal director of welfare in Konrad Adenauer’s Cologne and now associate professor of social economy and research at Bryn Mawr college, joined the Philadelphia committee as counselor for refugees and consultant to the refugee section. As Clarence Pickett reported to Albert Martin, she had “on her own initiative” carried on such an advisory role for some time and now the AFSC “decided to give some assistance to her.” Thenceforth the Berlin Center was to correspond with her directly about prospective immigrants.”

She was the direct contact for all the prospective immigrants...so she was such a vital part of Opa and so many others coming to the States.

Because she had quite a career and reputation, instead of doing a spotlight I put together, I will point you to a couple websites that document her career well (both are run through Google Translate, so some sentences may not make sense):

A translation of her Wikipedia page -
http://translate.google.com/translate?hl=en&sl=de&u=http://de.wikipedia.org/wiki/Hertha_Kraus&prev=/search%3Fq%3DHertha%2BKraus%26client%3Dsafari%26rls%3Den%26biw%3D1201%26bih%3D588
(note the picture of her statue on the Cologne City Hall Tower - pretty cool!)

Another translated site (I think a Sociology one...but not sure!)
http://translate.google.com/translate?hl=en&sl=de&u=http://www.sbk-koeln.de/uber-uns/geschichte/portrait-hertha-kraus/&prev=/search%3Fq%3DHertha%2BKraus%26client%3Dsafari%26rls%3Den

Hertha won’t be named directly too often through Opa’s emigration, but I’m always cognizant of the hard work she was doing behind the scenes. Much thanks to Hertha and the many lives she helped!
Posted by Sarah Snow at Saturday, November 16, 2013