So far, we have given a couple spotlights on people. We also wanted to give easy ways for those reading the blog to engage significant events that may not be well known to everyone reading. The kindertransports are one of them. Opa mentions while in Holland the opportunity to see people as they are coming through to England. Most of these folks he is talking about are part of the kindertransports. After Kristallnacht, it became a priority for many German parents, particularly Jewish parents, to get their children out of danger. 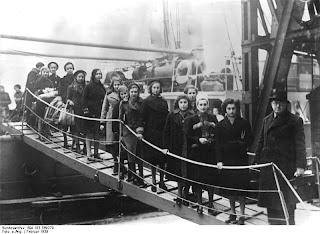 England agreed to accept children refugees, so from Dec 2, 1938 to September 1939, these “children transports” became known as kindertransports. Sarah, when she went to Germany, visited the monument with Gisela and Bern. When Opa mentions not seeing Gerd when he came through, he was talking about Bern. Bern was on one of the first kindertransports (Dec 14, 1939). Other friends and acquaintances of Opas were on Kindertransport. Below is Sarah’s reflection on seeing the powerful monument to these transports and a link to learn more about them:

When my parents and I met up with Gisela and Bern at the Quaker meeting house in Berlin, we had an idea of what to expect. I expected pictures, stories, letters, and a tour of the meeting house. What I got was infinitely more. Gisela and Bern dialogued, remembered, and shared. I could listen to the audio countless times while gleaning more information and nuances each time. Little did we know that Gisela’s plans for us that day expanded beyond the little meeting house. This is appropriate, because the Quaker lives never stayed isolated and insulated in the Quaker meeting house. They ventured out into the world and worked for justice and peace. Gis walked us outside and towards a train station. I thought we were just catching a train to go somewhere. We rounded a corner and I saw this: 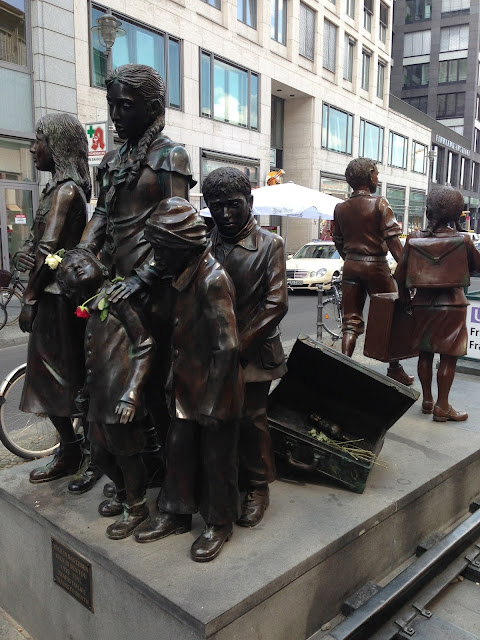 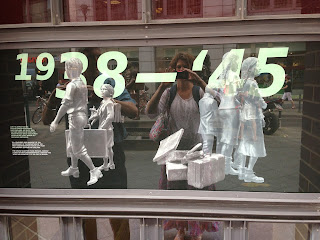 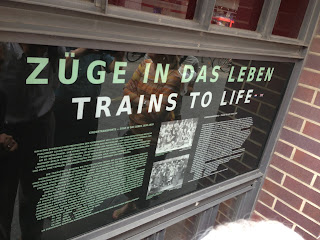 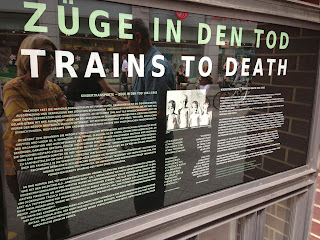 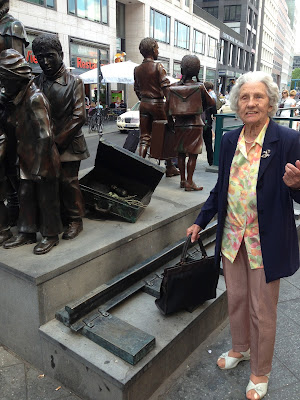 This memorial is called “Trains to Life, Trains to Death.” It held in stark contrast the images of children leaving on the kindertransport for England and children leaving on the rail cars for concentration camps. I stood there, half-listening to Gisela talk about the memorial, but distracted by my observations of the characters in stone, the people passing by the memorial, and Bern. Bern had never seen it before. I understand more now than I did then what that memorial might have meant to him. I still don’t understand more than a fraction of what he must have been thinking about, remembering. At the time, I wanted to announce to the street that this man had been on the kindertransport- out of pride to be connected to this moment in history. But the people walking by, they see it every day. Their great aunt or friend’s uncle’s mom had something to do with it.  It’s like how we treat cancer... we all know someone who has been affected by it, almost to the point that we are numbed to it- but the closer it strikes, the more surprised we are.

The kindertransport was a powerful and desperate act of kindness out of the faith we have in the innocence of children. If we cannot do anything else, we must at least spare the children. On one side of the memorial, you saw well-dressed children with suitcases and little tags on their clothing. Bern said that they all had those tags as identification. The children had brave expressions of hope on their faces. On the other side of the memorial, facing the opposite direction, you saw children in shabby clothes, with a darker tone to the stone. They all wore the star of David and their dilapidated suitcases were flung in a pile behind them, discarded. Their eyes were vacant, downcast, with maybe a flicker of fear. They were the ones destined for almost certain death.

I heard Gisela explaining the symbolism of the various images and the distinctiveness of the two “trains” going to either life or death... and while she was speaking I saw something that made me hold my breath for a moment. Two little girls, both happy in spirit with blonde hair like halos around their heads, climbed up onto the memorial. Their parents were casually watching them as they talked amongst themselves. The girls were on each side of the memorial, touching the head and arm of the stone figures. The girls were nearly identical in size to the children in stone. Something melted inside me, the stone became flesh and the girls showed me right there who was on those trains. And just as arbitrary as they chose the side to inspect the statues, that is how arbitrary was the outcome of who would live and die. 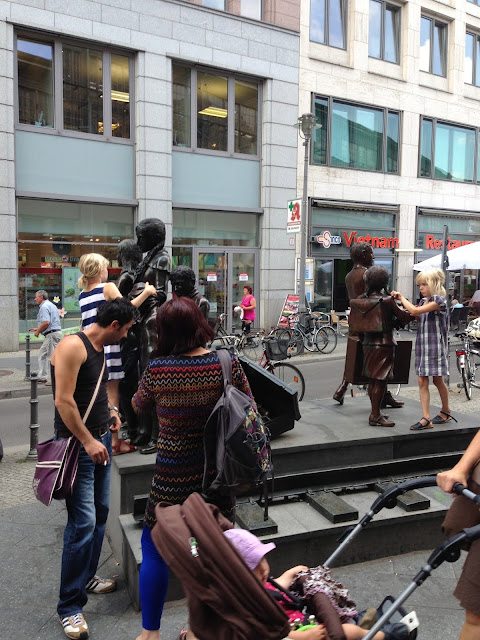 I looked at Bern and thought about how much of a miracle it was that he was standing there... miracle upon miracle really. How blessed was I to encounter this man...

We were just walking around Berlin to get to the train when Gisela had us stumbling over one of the most memorable memorials of the city. I didn’t know much about the kindertransport- and though I know much more now, I realize how little I know about that page in history.

Here are two good links with good info on these life-saving transports: