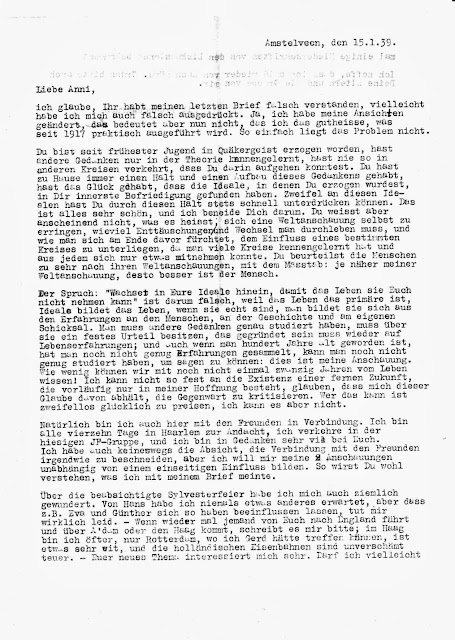 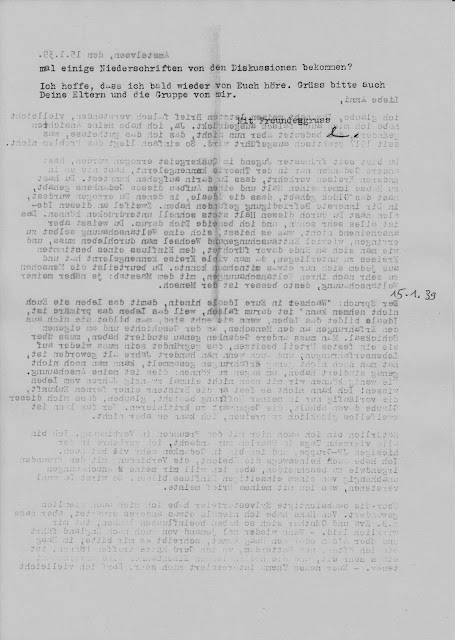 Original letter from Opa to Anni

I believe you misunderstood me in my last letter, perhaps I did not express myself correctly.
Yes, I have changed my view (opinion), but that does not mean that I now approve what has been feasible since 1917.  The problem is not that easy (simple).
From a very young age you were raised in the Quaker Spirit (beliefs), learned about other ideas only in theory, have never associated with other circles so you could see and learn. At home you always had strong support, and a buildup of these ideas, have been lucky that those ideals you were raised on gave you that inner satisfaction.  Any doubts about those ideals you were able to quickly suppress, because of that support.
All that is beautiful, and I envy you for it.  But you don’t seem to know, what it means to gain a worldview by yourself, how many disappointments and change one has to go through, and how at the end one is afraid to be subjected to the influence of a specific circle, since one has many circles and could take only a bit from each one.  You judge people based on their view of the world and the closer they are to your view, the better a person he is.


The saying: Grow into your ideals, so life cannot take them from you, is wrong because life is primary, life builds ideals, if they are real (true), one builds them from experiences with people, the story and one’s own fate.  One must have studied other  ideas very closely, had to have a solid opinion about it, which again can only be founded by life experiences, and even when one grows old, to 100 years, one has not gathered enough experiences, cannot study enough to be able to say: This is my opinion.  How little can we with our not even 20 years know about life?  I cannot believe strongly  in an existence in such a far future, which now only exists in my  hope, which keeps me from criticizing the present.  Whoever can do that can count himself lucky, I cannot do that.
Naturally I am in contact with the Friends here.  Every 14 days I am in Haarlem at a meeting, have contact with the J.F. (I guess that’s Jung Freunde, young friends) here, and I am with all of you in my thoughts.  And I have no intentions to reduce my tie to the Friends  in any way, but I want to shape my beliefs independently from a one-sided influence.  So you will understand, what I meant in my letter.
I was also somewhat surprised about the planned New Year’s party.  I never expected anything different from Hans, but that Eva and Guenther were influenced like that, I am sorry to hear.  Whenever anybody goes to England and comes through Amsterdam or the Haag, let me know, I am in the Haag more often, but Rotterdam, where I could have met Gerd, is a bit too far and the Dutch Rail is outrageously expensive.
Your new subjects interest me much.  Will I get some notes of the discussions?
I hope to hear from you again soon.  Please say hello to your parents and the group.
With Friend’s greetings,
Tom

This letter to Anni makes me love Opa even more. I had to read it a few times to really collect all the good things that I loved about it. I’m not sure exactly what Opa has written in the last letter that Anni misunderstood. If it was the letter from November, this is my guess:

One might call the suggestive, one can call it the joining spirit, which lies over such a prayer meeting, one can also speak of imagination, it’s all the same, the feeling is present, perhaps just imagined, but it is beautiful in its’ present. As I said, it gave me a home feeling…

Perhaps the idea of the Spirit as “imagined” rubbed Anni the wrong way? Or perhaps it was something else entirely, but Anni must have responded in some way that showed she was upset at outside influences on Opa’s ideas. Opa admits that he has changed a bit through his experiences... His line “that does not mean that I now approve what has been feasible since 1917” - is a mystery to me. I’m not sure what he’s alluding to. 1917 is an important year, but many things were happening that Opa could be talking about. The first world war was coming to a close (WW1: 1914-1918), the Russian Revolution was erupting, America declared war on Germany in 1917 (I was surprised by this, for some reason I thought the USA was involved in the war longer).. but nothing that stood out to me as something specific that Opa could be referencing. He was born in 1920, so he can’t be talking about his own journey... what historical or societal thing is he mentioning? Any historians have an idea?

Whatever the debate is specifically about (if it is specific), Opa makes a beautiful case for learning as you live. The philosopher in me is enamored with these words.

He starts by describing Anni’s situation, someone who was born and raised in the Quaker “Spirit” and exists comfortably in the supportive circle of Quaker thought and life. Her entire life is reinforced Quaker experience. He notes the beauty of it - how lovely it must be to be satisfied on the inside by the safe circle of influence.

He then contrasts his experience, as a boy who grew up with agnostic (at best) parents, one who practiced some Jewish ritual but never participated in any faith community. His family life was not as stable as Anni’s - although Anni’s family life was a completely different set of struggles. (Her parents were leaders in the Quaker group and her great-Uncle was the famous German aviator, Otto Lilienthal.) Opa learned about his beliefs and opinions through a series of life experiences. His parents were divorced. Opa’s father was tied up in the newspaper business, his mother was an educator with an ear to the ground for more learning. Opa’s experiences in his education, through his parents, through the Quakers, through his own reading and exploration- these were all worthy contributors to his circle of influence. He was wise enough to see through the Hitler regime, he was vulnerable enough to seek friendship and intellectual growth through the Quakers, and yet he did not stop there. I think this is where he critiqued Anni. She stopped, and chastised anyone who moved outside of where her realm of thoughts and ideals were: “You judge people based on their view of the world and the closer they are to your view, the better a person he is.” I think many of us can be convicted by that statement.

My absolute favorite line is Opa’s rebuttal of the saying “Grow into your ideals, so life cannot take them from you...” Opa says it “is wrong because life is primary, life builds ideals, if they <ideals> are real (true), one builds them from experiences with people, the story and one’s own fate.”  I really hope he’s not quoting someone here, because if these are his words: wow. Life is the great teacher, and the greatest instructors in it are the people we interact with.

In seminary, there was a running mantra, such that it was a joke almost. Kind of like “Jesus” is the answer to all your Sunday School questions, “It’s all about relationship” is the answer to all your seminary questions. We would throw this phrase around a bit, just because it really was an adequate answer for many debates. What was the most important thing? Relationship. Relationship with our fellow humans, relationship with nature, relationship with God. We could trace it all back to relationship. In a way, I think that Opa is saying this to Anni: relationships, people, experiences- these are all primary teachers. In any study or research you have primary documents... and the most primary of them all are people. The problem for many is that people are not cut and dry. People are not black and white. They are messy, nuanced, and too flexible. Opa, at least in this moment, seems to embrace the flexibility of life experiences. He seems to acknowledge that even if he felt completely sure of something today, he could not say with absolute certainty that in a lifetime of experiences he would not change his mind. It’s as if he is saying that to be so certain is to be closed to life’s primary teachers.

So he is not going to close the door on the worthy teachers from the Quaker tradition, but he will also not isolate himself from any others. He embraces the nuanced, messy, chaotic, and integral teacher for all things: life.

Apparently something weird happened at the New Year’s party- and he talks about it more in the letter to Gisela, written this same day.

Opa seems to be a geographical stop on the way to England for folks riding on the kindertransport or other means of transportation out of Germany. He missed Gerd’s passing through- and that is too bad. I met Gerd last summer in Germany, he is now called Bern, and he was one of the first to ride the kindertransport to England. He ended up in Australia, and by chance he was traveling (at age 90) to Berlin when I was there with my parents. He is a fascinating person, and after this blog I will do a spotlight on him and the kindertransport.

Opa is broadening his horizons with travel, new personal interactions, and more time to think. Little does he know how much he will see in his lifetime, and how life will continue to be primary as his greatest teacher.