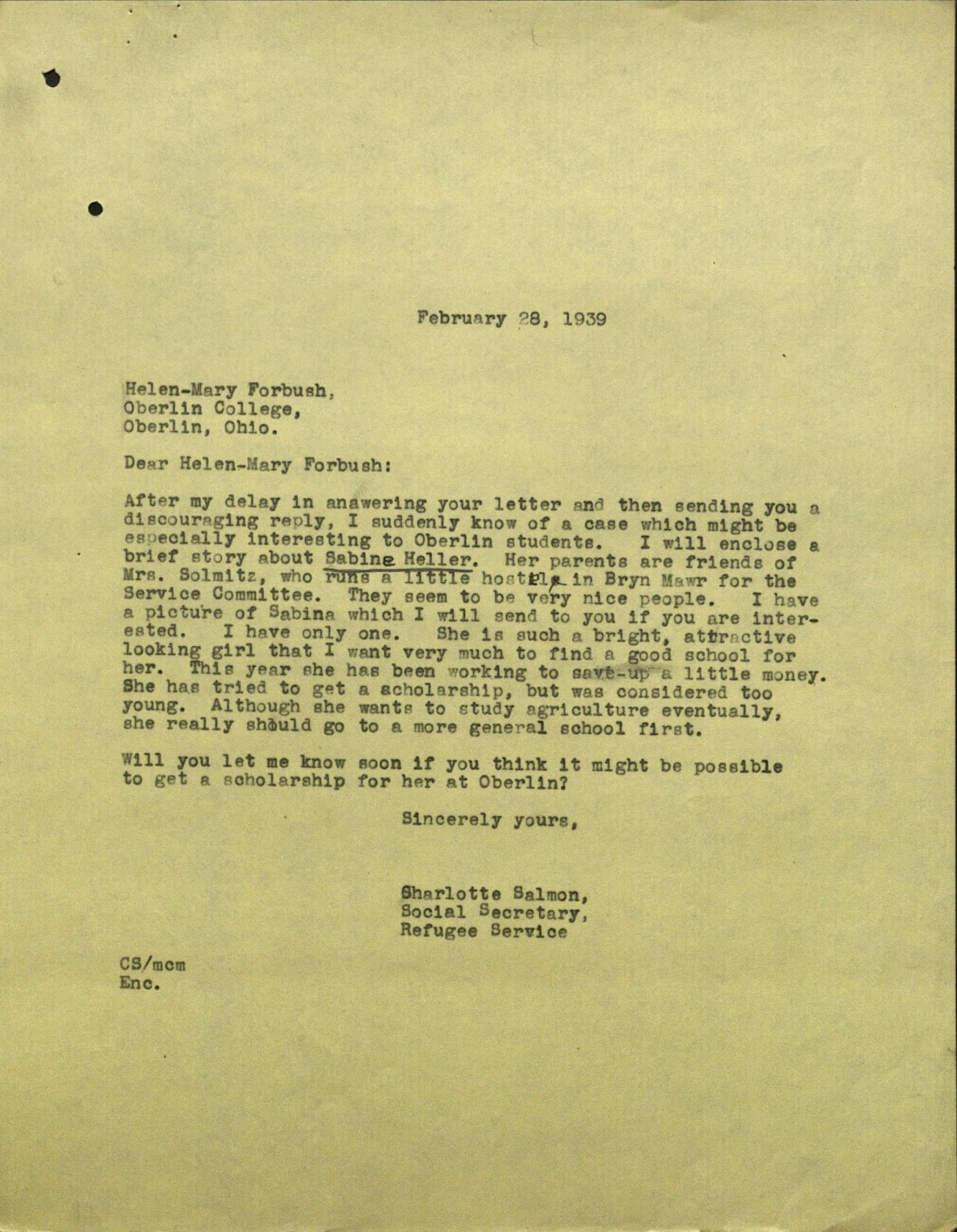 After my delay in answering your letter and then sending you a discouraging reply, I suddenly know of a case which might be especially interesting to Oberlin students. I will enclose a brief story about Sabine Heller. Her parents are friends of Mrs. Solmitz, who runs a little hostel in Bryn Mawr for the Service Committee. They seem to be very nice people. I have a picture of Sabina which I will send to you if you are interested. I have only one. She is such a bright, attractive looking girl that I want very much to find a good school for her. This year she has been working to save up a little money. She has tried to get a scholarship, but was considered too young. Although she wants to study agriculture eventually, she really should go to a more general school first.

Will you let me know soon if you think it might be possible to get a scholarship for her at Oberlin? 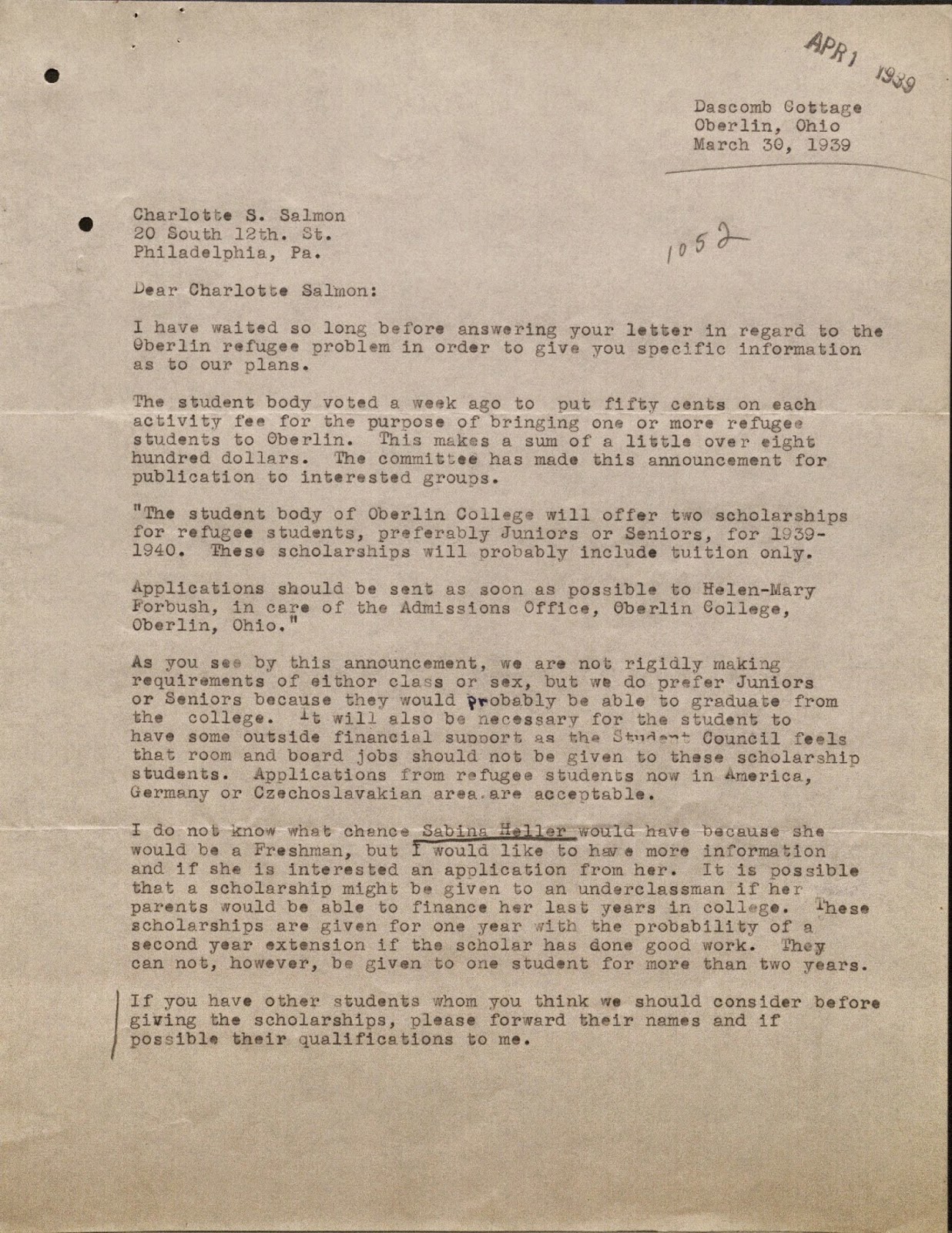 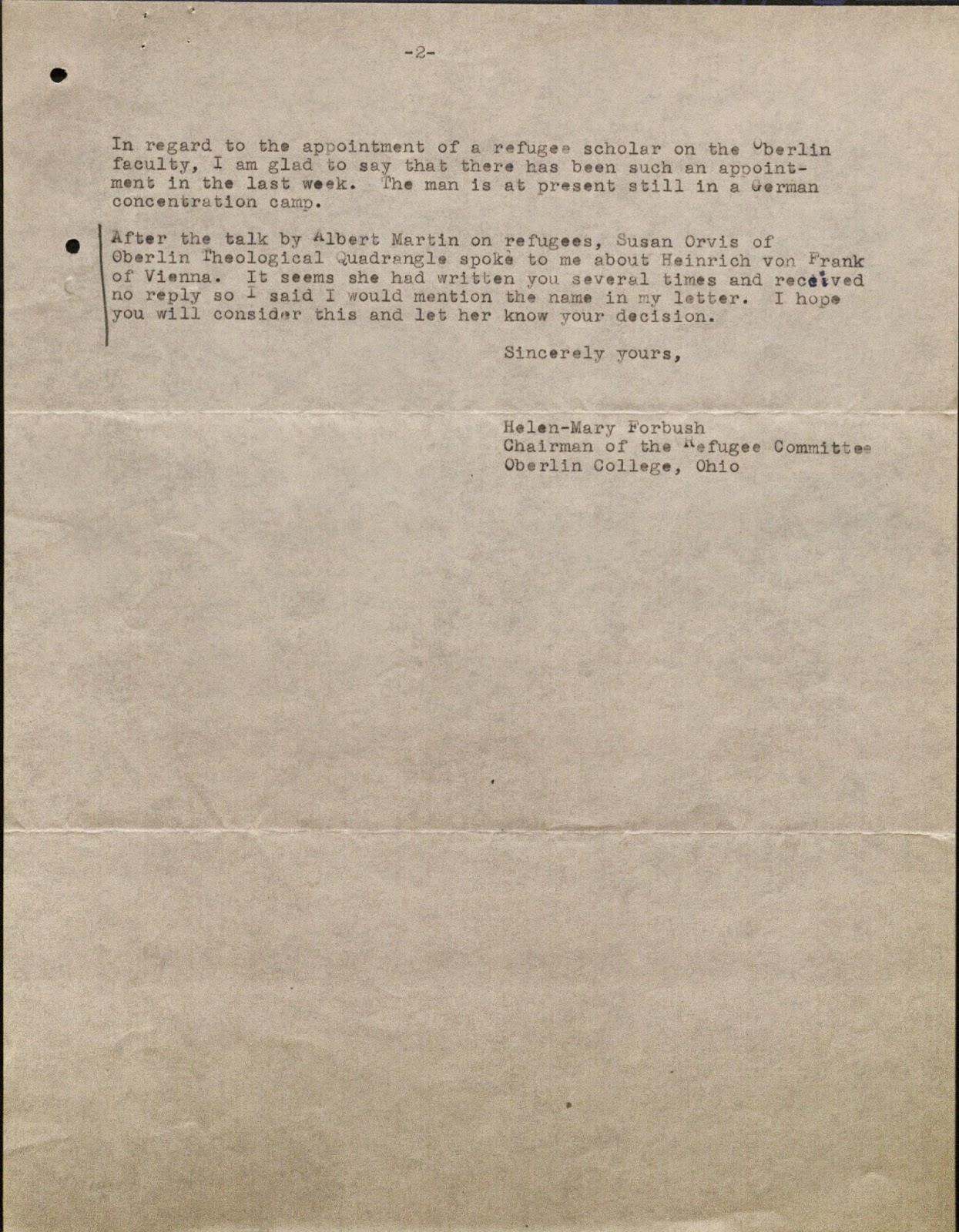 I have waited so long before answering your letter in regard to the Oberlin refugee problem in order to give you specific information as to our plans.

The student body voted a week ago to put fifty cents on each activity fee for the purpose of bringing one or more refugee students to Oberlin. This makes a sum of a little over eight hundred dollars. The committee has made the announcement for publication to interested groups.

"The student body of Oberlin College will offer two scholarships for refugee students, preferably Juniors or Seniors, for 1939-1940. These scholarships will probably include tuition only.

Applications should be sent as soon as possible to Helen-Mary Forbush, in care of the Admissions Office, Oberlin College, Oberlin, Ohio."

As you see by this announcement, we are not rigidly making requirements of either class or sex, but we do prefer Juniors or Seniors because they would probably be able to graduate from the college. It will also be necessary for the student to have some outside financial support as the Student Council feels that room and board jobs should not be given to these scholarship students. Applications from refugee students now in America, Germany or Czechoslavakian area are acceptable.

I do not know what chance Sabine Heller would have because she would be a Freshman, but I would like to have more information and if she is interested an application from her. It is possible that a scholarship might be given to an underclassman if her parents would be able to finance her last years in college. These scholarships are given for one year with the probability for a second year extension if the scholar has done good work. They can not, however, be given to one student for more than two years.

If you have other students whom you think we should consider before giving the scholarships, please forward their names and if possible their qualifications to me.

In regard to the appointment of a refugee scholar on the Oberlin faculty, I am glad to say that there has been such an appointment in the last week. The man is at present still in a German concentration camp.

After the talk by Albert Martin on refugees, Susan Orvis of Oberlin Theological Quadrangle spoke to me about Heinrich von Frank of Vienna. It seems she had written you several times and received no reply so I said I would mention the name in my letter. I hope you will consider this and let her know your decision. 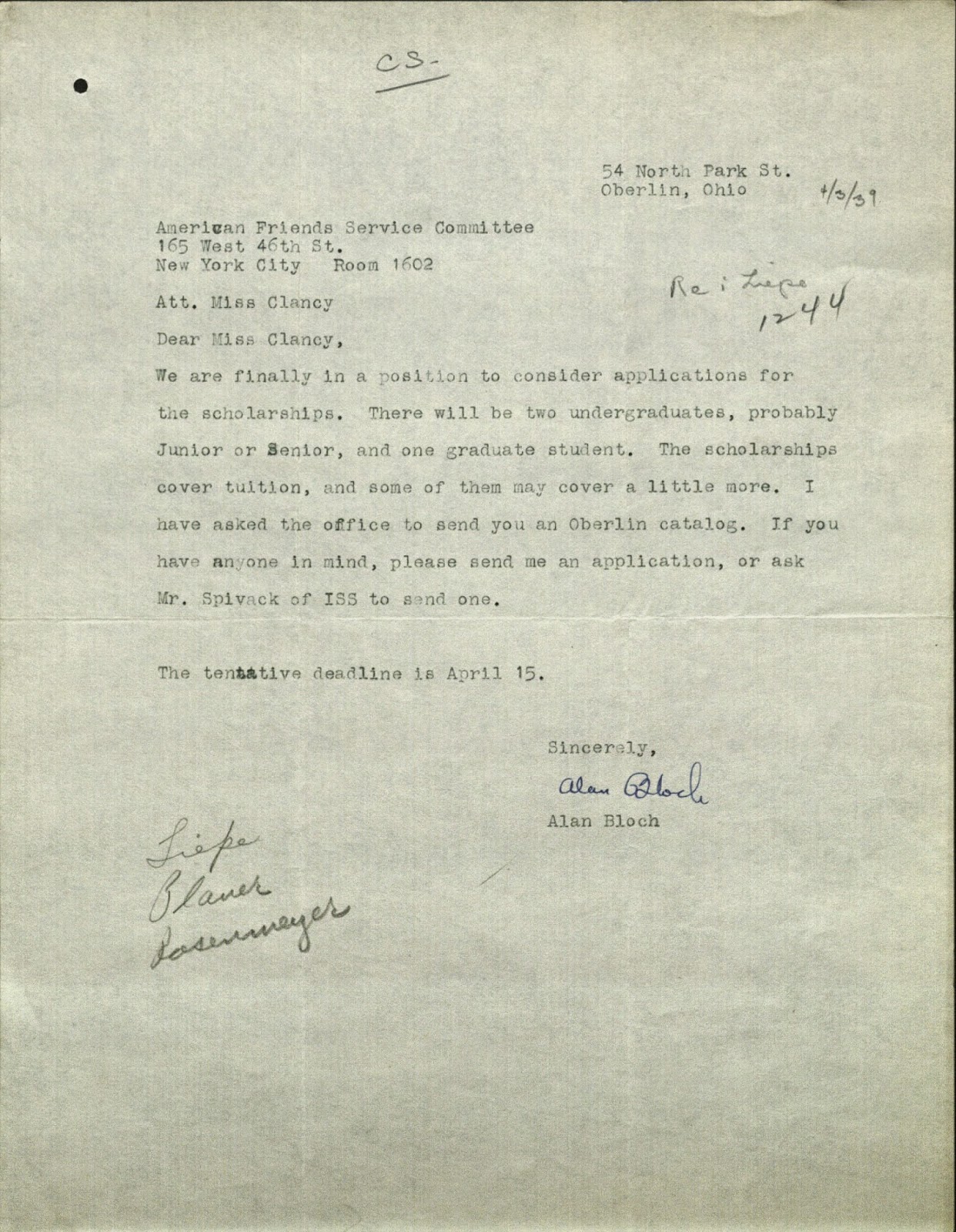 We are finally in a position to consider applications for the scholarships. There will be two undergraduates, probably Junior or Senior, and one graduate student. The scholarships cover tuition, and some of them cover a little more. I have asked the office to send you an Oberlin catalog. If you have anyone in mind, please send me an application, or ask Mr. Spivak of ISS to send one.

The tentative deadline is April 15. 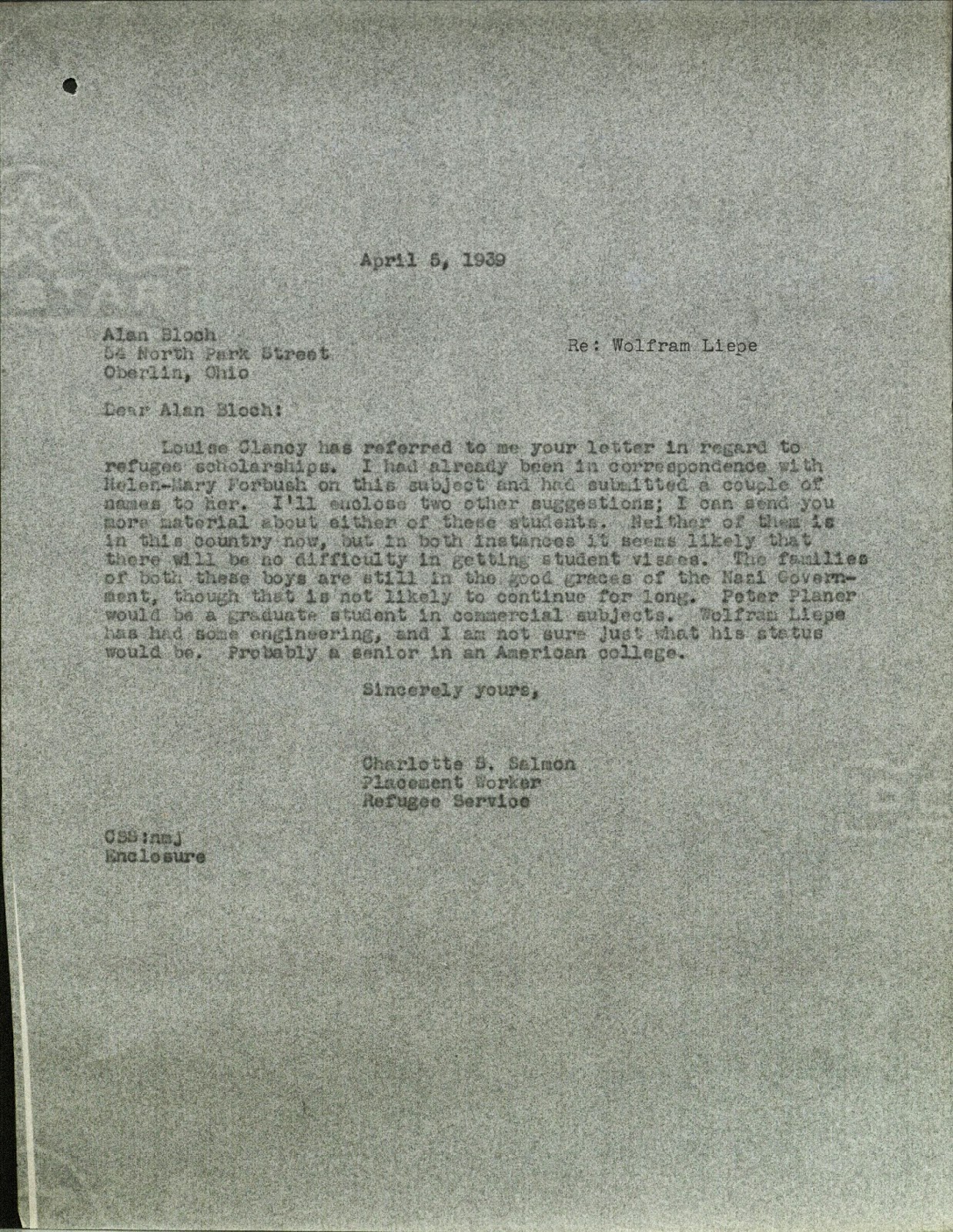 Louise Clancy has referred to me your letter in regard to refugee scholarships. I had already been in correspondence with Helen-Mary Forbush on this subject and had submitted a couple of names to her. I'll enclose two other suggestions; I can send you ore material about either of these students. Neither of them is in this country now, but in both instances it seems likely that there will be no difficulty in getting student visas. The families of both these boys are still in the good graces of the Nazi Government, though that is not likely to continue for long. Peter Planer would be a graduate student in commercial subjects. Wolfram Liepe has had some engineering, and I am not sure just what his status would be. Probably a senior in an American college. 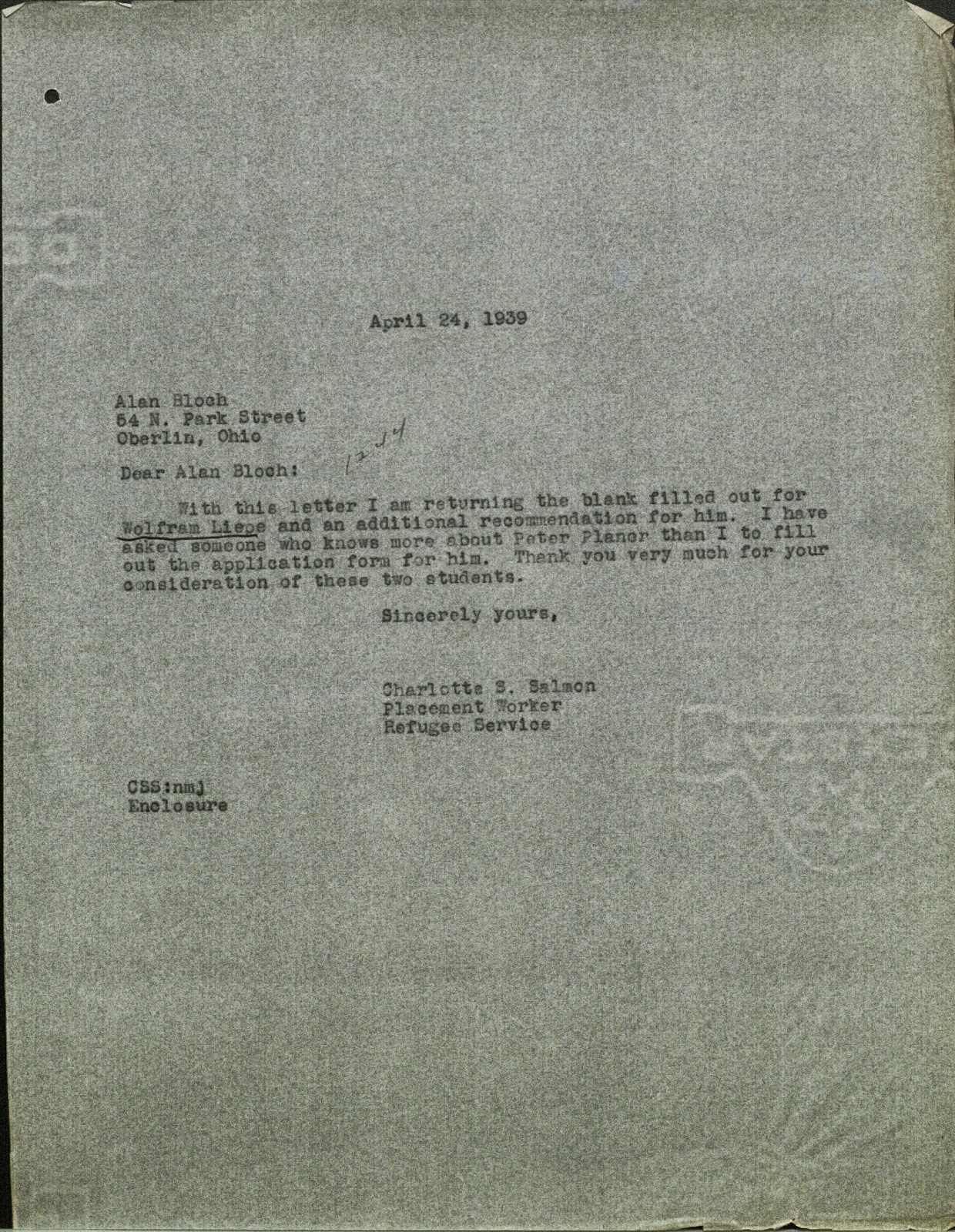 With this letter I am returning the blank filled out for Wolfram Liepe and an additional recommendation for him. I have asked someone who knows more about Peter Planer than I to fill out the application form for him. Thank you very much for your consideration of these two students.

We are about to read a slew of letters between colleges and the American Friends Service Committee (AFSC) and Opa- all in desperate efforts to get Opa that college acceptance in the USA that he dared to hope for. The note he sent to Mr. Martin started a process of advocacy for Opa - the details of which we as researchers are privy to.

This series of letters we grouped together for you - although they do not directly mention Opa- eventually there will be a connection. However- I think it is important to see this group of letters because it shows you how arbitrary the whole process was. Schools in the United States were starting to show hospitality and concern for German refugees. They began to raise funds for scholarships and ask agencies like the AFSC to connect them with a good refugee student.

The recommendation and selection process was much like a group of students huddled in an elevator and punching every number - hoping when the doors opened- someone would be invited out. Some schools wanted older students, some wanted younger. Some wanted females while others wanted males. Some wanted their refugee student to come from Germany, others wanted to ensure their political views weren’t too ill-fitted for their campus. It was AFSC’s job to make the best connections and suggestions possible- and ultimately to get the most students successfully placed in American schools as possible. This meant that- like the elevator buttons- they would throw multiple names at the schools in hopes that one of them would stick. Soon Opa’s name would join the list.

It is also helpful to remember that the concentration camp mentioned in the letter from Oberlin is likely a predecessor to the infamous concentration camps we learned about. The early versions were not necessarily the death sentence we think of- or even as harsh as we might imagine. That would soon change- but this might help explain why the writer of the letter is so blase about hiring a faculty member from out of a concentration camp.

You will see as we move through these letters that the changing historical context and distinct wishes of various colleges make for an extremely arbitrary process indeed. Who knows when your name will stand out to the school, or why. All you can do is hope that your floor is the next one.
Posted by Sarah Snow at Friday, December 27, 2013