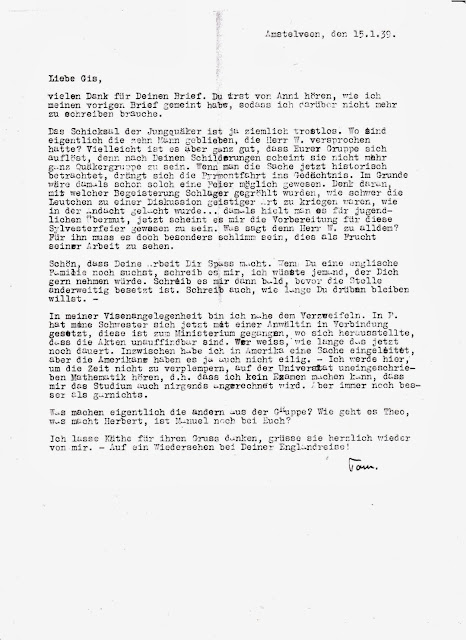 Many thanks for your letter.  You will hear from Anni, what I meant to say in my last letter, so I don’t have to write about it again.  The fate of the Young Quakers seems quite hopeless.  Whatever happened to the 10 persons Mr. W. had promised?  Perhaps it is good that your group will dissolve, because judging by your description, it does not seem to be an all Quaker group anymore.  Looking back, the Pyrmont trip pushes back into one’s memory.  As a matter of fact, that kind of party would have been possible then already.  Do you remember with what enthusiasm popular hit songs were  screamed (sung) loudly, how difficult  it was to have an intelligent discussion with them, how there was laughter during prayer time, back then one accounted that to youthfully light spirits, now it seems to me, it was the preparation for that New Year’s celebration.  What does Mr. W. say about all of that?  It must be especially bad for him to see this as the fruit of his work.

Great that you enjoy your work.  If you are still looking for a British family, write to me, I know somebody who would love to have you.  So write soon, before the position is filled otherwise.
Write also, how long you will stay there.

In the matter of my Visa, I am close to despair.  In P. (Paris maybe?) my sister contacted an attorney who went to the ministerium, where it showed that the file was not to be found.  Who knows how long all this will take now?  In the meantime, I initiated  something in America, but the Americans are not much in a hurry either.  So not to waste time here, I attend studies in Math at the university, however not enrolled, which means I cannot take exams, and that my studies will not be credited anywhere.  But it is still better than nothing.

How are all the others of the group?  How is Theo? How is Herbert, is Manuel still with you?

I thank Kaethe for her greeting, please say hello to her from me.  Until a Wiedersehen (see you again) at your trip to England. 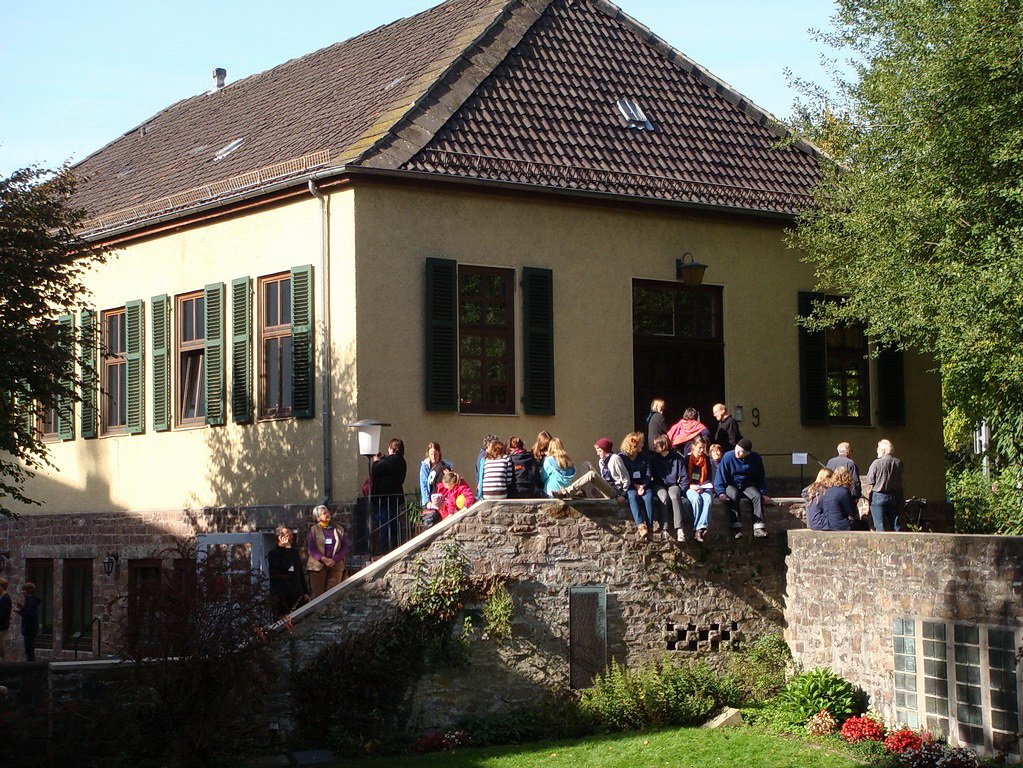 This is the Quaker House in Bad Pyrmont, Germany. A place of retreat for the Berlin Quakers.

Opaʼs letter to Gis (Gisela Halle) on the same day as her sister (likely in the same envelope) addresses the other part of what seems to have been their letter to him. He addressed the changing landscape of his mind and opinions to Anni. Now to Gis he discusses the disappointing New Yearʼs party and the failing Quaker youth group. After reading his letter, I have to admit, I giggled a little bit. Seems like Opa is 19 going on 47. Heʼs got a “those youngʼuns” kind of tone through out the letter, like he just canʼt believe a group of teenagers would run around yelling and giggling at inappropriate times. Ha!

Honestly though, I can imagine how hard it was for a group that was so close and formative in each otherʼs lives to experience the inevitable falling away. The group has lost many of its leaders to the world events and just basic age: people are moving away, finding careers, and in light of Germanyʼs political climate- many are moving farther away and sooner than might be anticipated. The diaspora of Germany and Europe is being felt... even on the smallest scale of a group of kids who got together for moral, spiritual, and intellectual support... and above all- friendship. Those ties are being tested by the whirlwinds that confuse, toss, and disperse.

In order to defend the ancient sound of my Opa at the age of 19, I do need to clarify something about Quaker practices. The screamed songs and giggling prayers... really would have stood out significantly more in a Quaker setting than perhaps a different type of atmosphere- religious or otherwise. Especially German Quakers. German culture is not loud, brusque, or flamboyant. At least not my interaction with it. In restaurants, you can be in a completely full place and carry on a conversation in a normal voice- and hear each other! This is not the case in the US. When I flew back to the US from 10 days in Germany, I sat in the Atlanta airport and I thought my head was going to explode. The TVs were blaring, everyone seemed to be yelling, it was just excruciatingly loud. Iʼve adjusted of course, but this gives you an idea of how culturally quieter Germany is.

Now, add to that culture the practice of the Quakers. The Quakers spend their worship in silence. Silence. One glorious hour of silence. And they are all completely comfortable with it. It is a very sacred time and moment- it is not stifled, foreboding silence, but peaceful quiet. The silence is not confining, but rather peacefully freeing. The popular song that the youth group sang, “Die Gedanken sind Frei” (Our Thoughts Are Free) is about facing censorship with the hope and dignity of the fact that our thoughts cannot be confined. The inner life for Quakers is an extremely sacred and life-giving thing. Practicing silence in a group is strangely communal. I never really understood how being quiet with a group of people could be a communal event, but it is wildly so. That communal moment has as its foundation a mutual respect of the silent, open space to connect with the Spirit that speaks into each soul. That silence is the open space out of which someone may speak if they feel the Spirit has spoken something to them worth sharing. That silence is an equalizer. So it makes a little more sense that the screamed songs and giggling in that sacred silence was so offending... Not to say that it is so incredibly surprising, but perhaps it is more surprising and disrespectful than another setting.

Opa moves on from the “wild” party and asks about Gisʼ work and possibility to move to Britain. I am quite confused about who he would know in Britain to connect her with.

Opa writes about his Visa - and it is interesting that he had a real plan (plan B?) to go to Paris. What would that have been like? What would he have done? If he ended up near his sister.. how drastically that would have changed his life! It seems that his Visa in France was delayed primarily because it got buried in the pile.. It just really boggles my mind to think of how completely different his life would have been if he had gotten a Visa for France... Thereʼs no way he fully comprehended the wildly different paths his life would have taken depending on where he went. He really was just functioning in the present, trying to get himself to the next step, next available possibility- anywhere. Study in America, study in France... just anywhere but Germany. I love that he filled his time attending classes- just for fun. Not literature or something, math classes. Thatʼs the nerdy Opa I know.