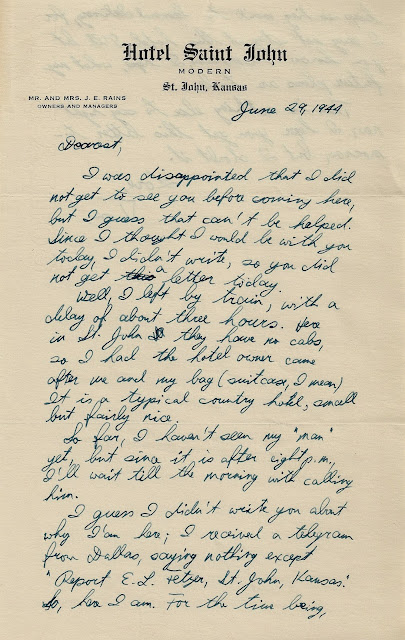 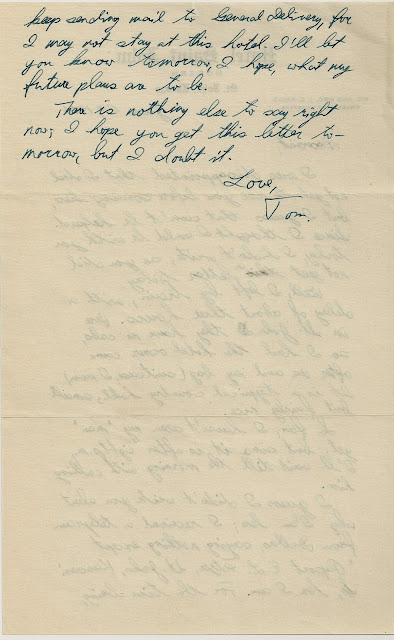 I was disappointed that I did not get to see you before coming here, but I guess that can't be helped. Since I have thought I would be with you today, I didn't write, so you did not get a letter today.

Well, I left by train, with a delay of about three hours. Here in St. John they have no cabs, so I had the hotel owner came after me and my bag (suitcase, I mean). It is a typical country hotel, small but fairly nice.

So far, I haven't seen my "man" yet, but since it is after eight p.m., I'll wait till the morning with calling him.

I guess I didn't write you about why I'm here; I received a telegram from Dallas, saying nothing except "Report E.L. Fetzer, St. John, Kansas." So, here I am. For the time being, keep sending mail to General Delivery, for I may not stay at this hotel. I'll let you know tomorrow, I hope, what my future plans are to be.

There is nothing else to say right now; I hope you get this letter tomorrow, but I doubt it. 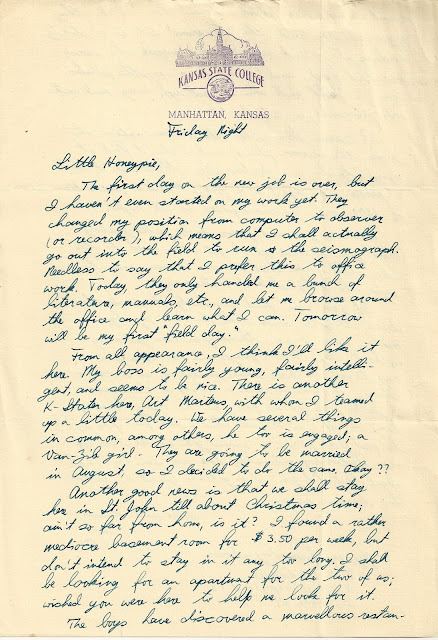 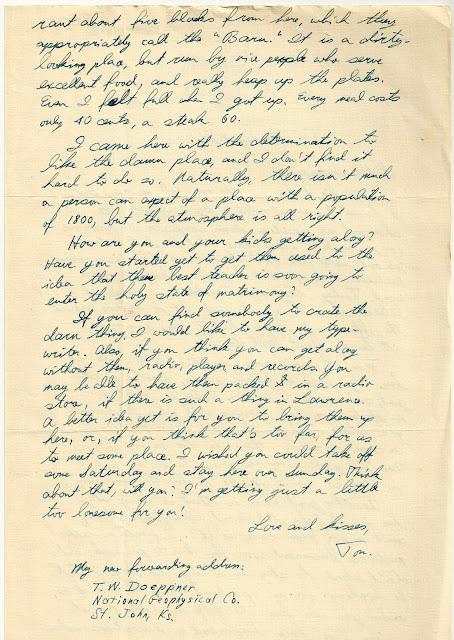 The first day on the new job is over, but I haven't even started on my work yet. They changed my position from computer to observer (or recorder), which means that I shall actually go out into the field to run the seismograph. Needless to say that I prefer this to office work. Today, they only handed me a bunch of literature, manuals, etc. and let me browse around the office and learn what I can. Tomorrow will be my first "field day."

From all appearance, I think I'll like it here. My boss is fairly young, fairly intelligent, and seems to be nice. There is another K-Stater here, Art Martens, with whom  I teamed up a little today. We have several things in common, among others, he too is engaged; a Van-Zib girl. They are going to be married in August, so I decided to do the same. Okay??

Another good news is that we shall stay here in St. John till about Christmas time; ain't so far from home, is it? I found a rather mediocre basement room for $3.50 per week, but don't intend to stay in it any too long. I shall be looking for an apartment for the two of us; wished you were here to help me look for it.

The boys have discovered a marvellous restaurant about five blocks from here, which they appropriately call the "Barn." It is a dirty-looking place, but run by nice people who serve excellent food, and really heap up the plates. Even I felt full when I got up. Every meal costs only 40 cents, a steak 60.
I came here with the determination to like the damn place, and I don't find it hard to do so. Naturally, there isn't much a person can expect of a place with a population of 1800, but the atmosphere is all right.

How are you and your kids getting along? Have you started yet to get them used to the idea that their best teacher is soon going to enter the holy state of matrimony?

If you can find somebody to crate the darn thing, I would like to have my typewriter. Also, if you think you can get along without them, radio, player, and records. You may be able to have them packed in a radio store, if there is such a thing in Lawrence. A better idea yet is for you to bring them up here, or if you think that's too far, for us to meet some place. I wished you could take off some Saturday and stay here over Sunday. Think about that, will you? I'm getting just a little too lonesome for you!

In two days and two letters, we learn a lot! About halfway through the first letter I was thinking, wait, what did I miss? Then Opa answered my question: he received a telegram stating to report, with a name and location. That seems like not a whole lot of information. But I guess it's enough! So Opa showed up at St. John and it's a small enough town I suppose he found the factory or office or wherever the place was. St. John is not far from Grandmother's home town, or McPherson, or Kansas State. Opa is sort of in the middle of all his American stomping grounds, which must have been some small sense of comfort to him starting out.

He is so excited to be going outside and working on the field rather than at a desk. I'm right there with him. I could not do a window-less cubicle for very long. He even gets to work with someone who went to the same school. They don't know each other, but I'm sure they had some of the same teachers, and Opa mentioned they had a lot in common. He uses that as a segway to nudge Grandmother about getting married.

Poor Opa, he keeps trying to marry the woman and she doesn't seem to be settling down any time soon. I'm in Grandmother's corner on this one. She's busy. She is in Lawrence, home of the University of Kansas, getting her Master's Degree in preschool education (early childhood development). For the 1940s, I appreciate her drive and that she is not slowing down on her own goals. I think even progressive Opa is a little slow to catch that drift. Opa mentioned getting an apartment for the two of them, but I don't think she's going to be there as much as he is hoping.

I am definitely jealous of that $0.60 steak. He's finally at his first real job, and for all the newness, things are going well.