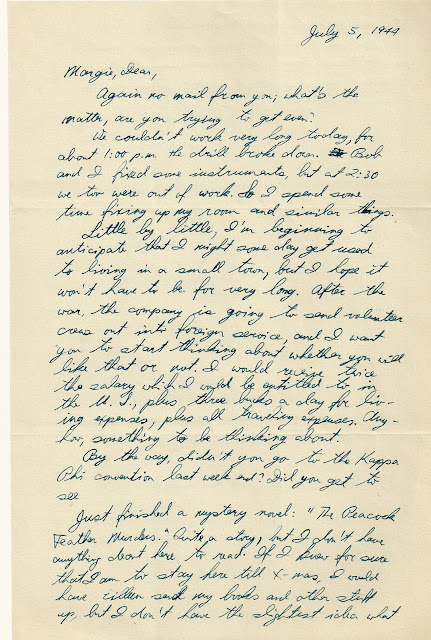 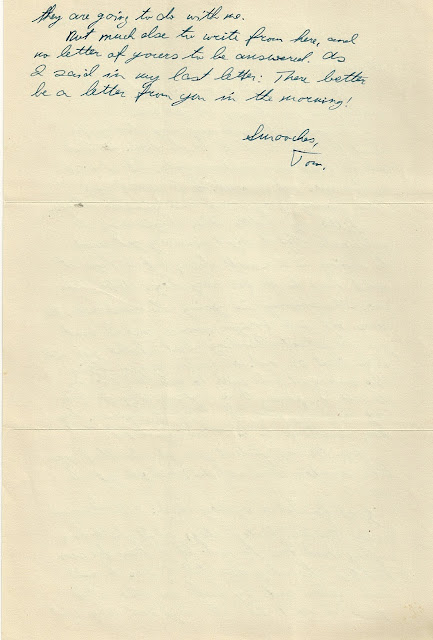 Again, no mail from you; what's the matter, are you trying to get even?

We couldn't work very long today, for about 1:00pm the drill broke down. Bob and I fired some instruments, but at 2:30 we too were out of work. So I spend some time fixing up my room and similar things.

Little by little, I'm beginning to anticipate that I might some day get used to living in a small town, but I hope it won't have to be for very long. After the war, the company is going to send volunteer crews out into foreign service, and I want you to start thinking about whether you will like that or not. I would receive thrice the salary which I would be entitled to in the U.S., plus all traveling expenses. Anyhow, something to be thinking about.

By the way, didn't you go to the Kappa Phi convention last week end? Did you get to see

Just finished a mystery novel: "The Peacock Feather Murders." Quite a story, but I don't have anything decent here to read. If I knew for sure that I am to stay here till X-mas, I would have Eileen send my books and other stuff up, but I don't have the slightest idea what they are going to do with me.

Not much else to write from here, and no letter of yours to be answered. As I said in my last letter: There better be a letter from you in the morning!

Opa has gone another day without hearing from Grandmother. I imagine her days are a little more full than his. He's working, getting to know the small amount of people in town, and that's about it. Grandmother is getting a graduate degree and probably has a group of school friends to spend time with.

Opa is already itching to travel again, thinking beyond war-time, wondering if Grandmother would be open to going overseas. I wonder if he's hoping for a chance to reunite with his family, or just hoping for a change of scenery. I suspect it's both. I can't imagine growing up in Berlin with trips to the ocean and mountains and then being in Kansas for five years. He's not complaining, but freedom in Kansas probably tastes a tiny bit stale after a while. I'm sure he'd like to try freedom in Switzerland.

Opa appears to have left the letter mid-sentence and then unwittingly skipped right past it. Who knows who Grandmother may have seen at the convention.

I also have read (half of) the "Peacock Feather Murders," and so far it's a fun whodunnit mystery novel. Opa liked it but didn't seem to think it was as good as his usual books. I wonder what was in his favored collection.

He ends with smooches and hope for a letter to respond to!