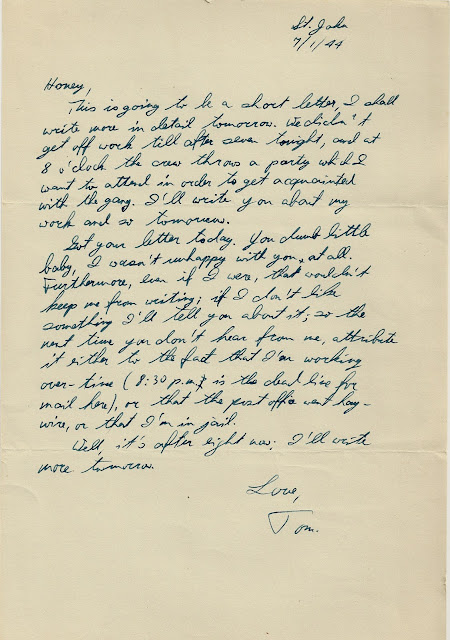 This is going to be a short letter, I shall write more in detail tomorrow. We didn't get off work till after seven tonight, and at 8 o'clock the crew throws a party which I want to attend in order to get acquainted with the gang. I'll write you about my work and so tomorrow.

Got your letter today. You dumb little baby, I wasn't unhappy with you at all. Furthermore, even if I were that wouldn't keep me from writing; if I don't like something I'll tell you about it; so the next time you don't hear from me, attribute it either to the fact that I'm working over-time (8:30pm is the deadline for mail here), or that the post office went haywire, or that I'm in jail. 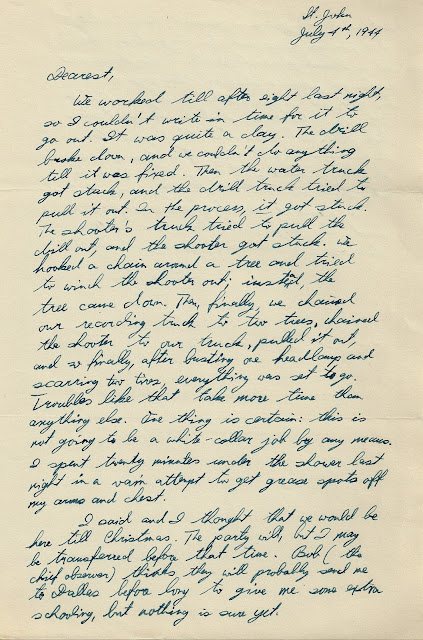 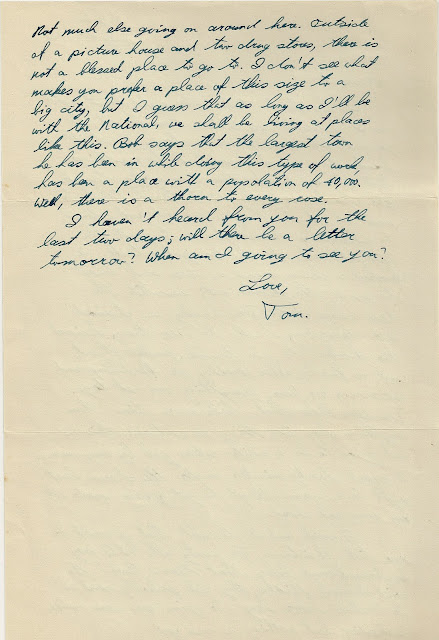 We worked till after eight last night, so I couldn't write in time for it to go out. It was quite a day. The drill broke down, and we couldn't do anything till it was fixed. Then the water truck got stuck, and the drill truck tried to pull it out. In the process, it got stuck. The shooter's truck tried to pull the drill out, and the shooter got stuck. We hooked a chain around a tree and tried to winch the shooter out; instead, the tree came down. Then, finally, we chained our recording truck to two trees, chained the shooter to our truck, pulled it out, and so finally, after busting one headlamp and scarring two tires, everything was set to go. Troubles like that take more time than anything else. One thing is certain: this not going to be a white-collar job by any means. I spent twenty minutes under the shower last night in a vain attempt to get grease spots off my arms and chest.

I said I thought that we would be here till Christmas. The party will, but I may be transferred before that time. Bob (the chief observer) thinks they will probably send me to Dallas before long to give me some extra schooling, but nothing is sure yet. Not much else going on around here. Outside of a picture house and two drug stores, there is not a blessed place to go to. I don't see what makes you prefer a place of this size to a big city, but I guess that as long as I'll be with the National, we shall be living at places like this. Bob says that the largest town he has been in while doing this type of work, has been a place with a population of 40,000. Well, there is a thorn to every rose.

I haven't heard from you for the last two days; will there be a letter tomorrow? When am I going to see you?

OK, so I'll chat about the first letter first, it's short and sweet and has the phrase "dumb little baby" in it. Bless it. Opa, a little 101 on how to make literally anyone feel better: don't call them a dumb little baby.

I'm sure he got away with it, especially since after that his words were pretty good. As far as relationships go, he's not too bad at it. He's got the whole open communication thing figured out, and lets Grandmother know that if she doesn't hear from him, he's either working too hard or in jail. Ha!

But if you've ever been in a romantic relationship, you know this stage. You think you know and trust a person, but you haven't been with them that long and you start to second-guess yourself and them. It's almost like that expression when people are waiting for the other shoe to drop. They think that things are maybe going too well so they wonder if in fact the love of their life hates them.

The second letter had me rolling. The series of events flowed like a comedy. I read it a few times to understand what pieces of machinery were breaking, getting stuck, or pulling out trees.

It reminded me of a story my husband and I tell every now and then about his move from grad school to his first job after graduating. We rented a U-Haul in Atlanta, Georgia, and planned to drive together to Virginia with all his stuff. His brother flew down to help with the move and drive a vehicle.

I have to prep the story to say that the house that Jason lived in with a few other roommates was a nice house with a *really* steep driveway. It was not only steep but a bit of a switch-back. Also, minor detail: it rained that day.

Jason got in the truck, put it in drive, and made it about half way up the drive before he was getting too wedged tight in a turn that he had to do some finagling. This resulted in the U-Haul sliding backwards off the driveway into the hill, and being stopped from falling over a mini-cliff by one tiny tree.

We tried everything we could do to get the U-Haul out. We put boards and rocks under the wheels, people pushed behind it (this was really dumb), and other dangerous tricks I'm probably blocking out right now. By this point I had picked Jason's brother up from the airport and we had him on the phone with the rental company, making sure whatever we did wouldn't cost us more money in fines and insurance. Just what did the insurance cover?

We dialed up a towing company. When the guy came, he said that there was a chance we would need a crane to lift the U-Haul out. But he had an idea and wanted to try it. The house and the neighbor's house were both owned by the church that Jason worked for, so the towing guy offered to gun his truck up the adjacent home's equally steep (and higher) driveway and lower his towing cable from there to the U-Haul and try to winch it up and then lower it slowly down the driveway... all while someone inside the U-Haul steered it. I volunteered Jason's brother for this job. Looking back, I may not have won any brownie points for that.

The tow guy asked one of our friends to hold the emergency break in place on the tow truck while he did the winching. Our "all else fails" plan was to cut the tree down and let the U-Haul fall onto the street below, and then get a replacement.

We hadn't even loaded the truck yet.

I watched with half-shut eyes as Jason's brother hopped in the truck, gave the thumbs up to the tow-truck driver who was positioned up the hill to the left, at the top of the neighbor's driveway. He cranked up the winch and the U-Haul began to budge. Somehow, the plan worked! The U-Haul made it back onto the driveway and the tow truck slowly let out the cable as Jason's brother expertly steered the U-Haul down the drive.

There was only a minor bump on the bumper where the tree had held the U-Haul in place, so we decided to keep the truck we had and keep going with the move. We drove the truck to the church parking lot which was adjacent to a wooded lot along the back end of the house. We put plywood down on top of the mud through the wooded lot. Then we finally dragged all of my husband's belongings through the backyard, up a retaining wall, and over the layer of plywood through the wooded lot into the parking lot where the dented U-Haul awaited.

Then we drove through more rain all the way to Virginia.

At the time I was both scared and a focused on solving the problems of the day, but once we arrived to our place in Virginia, I pretty much collapsed into bed. Opa did the same after his comedy of errors, but with a shower.

I kinda wish I had heard Opa tell this story. I know my kids have heard our U-Haul story!

It looks like Opa will be moving around for his job, and to mostly small towns. He doesn't seem to thrilled about it but he knows it's what Grandmother prefers. I do think he's genuinely glad for Grandmother's sake and hopes that it makes her happy to know they'll be in small towns.

I wonder what Opa was thinking overall about this job. Was he wondering if this was it, everything he had worked for? Or perhaps he thought it was one step of many. Or maybe he wasn't thinking that far ahead and had only Grandmother and a crazy day of work in his mind.