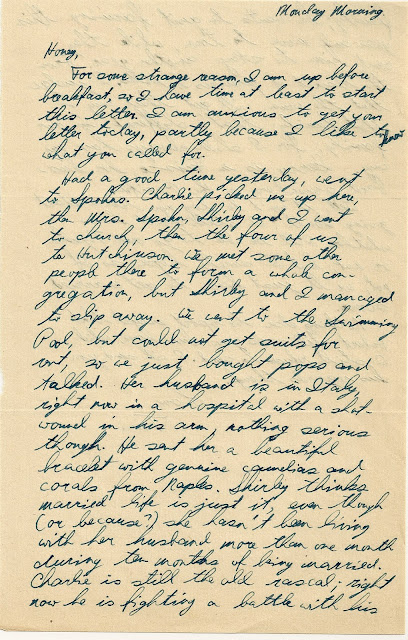 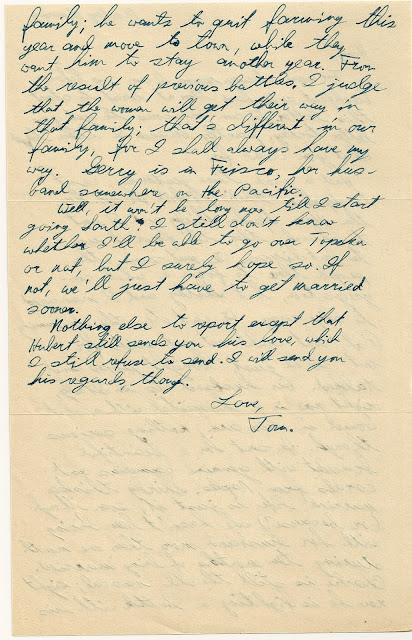 For some strange reason, I am up before breakfast, so I have time at least to start this letter. I am anxious to get your letter today, partly because I like to know what you called for.

Had a good time yesterday, went to Spohns. Charlie picked me up here, then Mrs. Spohn, Shirley and I went to church, then the four of us to Hutchinson. We met some other people there to form a whole congregation, but Shirley and I managed to slip away. We went to the Swimming Pool, but could not get suits for rent, so we just bought pops and talked. Her husband is in Italy, right now in a hospital with a shot-wound in his arm, nothing serious though. He sent her a beautiful bracelet with genuine camellias (?) and corals from Naples. Shirley thinks married life is just it, even though (or because?) she hasn't been living with her husband more than one month during ten months of being married. Charlie is still the old rascal; right now he is fighting a battle with his family; he wants to quit farming this year and move to town, while they want him to stay another year. From the result of previous battles, I judge that the women will get their way in that family; that's different in our family for I shall always have my way. Gerry is in Frisco, her husband somewhere on the Pacific.

Well, it won't be long now till I start going South. I still don't know whether I'll be able to go over Topeka or not, but I surely hope so. If not, we'll just have to get married sooner.

Nothing else to report except that Hubert still sends you his love, which I still refuse to send. I will send you his regards, though.

The pace of these letters are so different from what we had before. Now instead of dates spread out through the year with various voices, we just have Opa's voice in clumps of days. Every time he and Grandmother are separated (which now that he's graduated and has a job, looks like it will be longer), there is a slew of letters almost daily, if not more.

We don't hear much of what is happening with Grandmother. Opa is still making his rounds, visiting folks, doing some farm work and attending church even though he doesn't really want to.

Opa is waiting to hear where he will actually report for work. All this nomadic living and uncertainty might be challenging for most people, but Opa has plenty of experience in this department. He's confidently spending his days, waiting for the next thing, and knowing he can sleep just about anywhere.

It was interesting to hear in little snapshots about the lives of people during the war. A wife receives a gift from an injured husband who is recovering in Italy. A son wants to move out and down town, leaving the farm life behind. Another wife is living independently while her husband is somewhere in the Pacific. These are all typical of the time.

Opa made a little quip about him being in charge of his family, which I found hilarious since Grandmother always got what she wanted. I did find it endearing that he was thinking and talking about the two of them as a family. He had been so long without a family. He's adopted (or been adopted) by some along the way: the Shelleys and Spohns. But what he wants is the real deal, and Grandmother is the first chance he has had in a long time for that.

Even though Opa cracks a couple little jokes (Hubert's love being withheld), I can sense a weariness in his letters. I think he's really missing Grandmother. He doesn't quite have the energy in his letters that he does when he knows exactly the next time he'll get to see her. He is used to missing his family, but that's not a feeling that has gotten any easier.