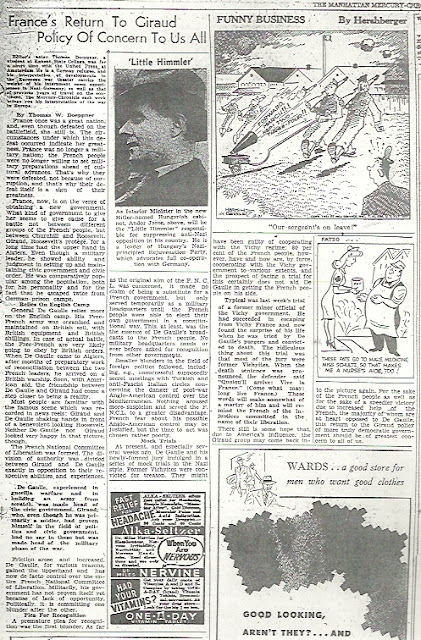 Editor's note: Thomas Doeppner, a student at Kansas State College, was for a short time with the United Press at Amsterdam. He is a German refugee, and his interpretation of developments in the European war theater carries the weight of his internment camp experiences in Nazi Germany, as well as that of previous years of travel on the continent. The Mercury Chronicle each week brings you his interpretation of the war in Europe.

France once was a great nation, and, even though defeated on the battlefield, she still is. The circumstances under which this defeat occurred indicate her greatness. France was no longer a military nation: the French people were no longer willing to set military preparations ahead of cultural advances. That's why they were defeated, not because of corruption, and that's why their defeat itself is a sign of their greatness.

France, now, is on the verge of obtaining a new government. What kind of government to give her seems to give case for a battle not between different groups of the French people, but between Churchill and Roosevelt. Giraud, Roosevelt's protege for a long time had the upper hand in Algiers. Even though a military leader, he showed ability and judgment in setting up and maintaining civic government and civic order. He was comparatively popular among the population, both for his personality and for the fact that he escaped twice from German prison camps.

General De Gaulle relies more on the English camp. His Free-French army was organized and maintained on British soil, with British equipment and British shillings. In case of actual battle, the Free-French are very likely going to obey by British orders. When De Gaulle came to Algiers, after months of preparatory work of reconciliation between the two French leaders, he arrived on a British warship. Soon, with American aid, the friendship between De Gaulle and Giraud had come a step closer to being a reality.

Most people are familiar with the famous scene which was recorded in news reels: Giraud and De Gaulle shaking hands in front of a benevolent looking Roosevelt. Neither De Gaulle nor Giraud looked very happy in that picture, though.

The French National Committee of Liberation was formed. The division of authority was divided between Giraud and De Gaulle exactly in opposition to their respective abilities and experiences.

Friction arose and increased. De Gaulle, for various reasons, gained the upper hand and has now de facto control over the entire French National Committee of Liberation. Militarily, his government has not proven itself yet because of lack of opportunity. Politically, it is committing one blunder after the other.

A premature plea for recognition was the first blunder. As far as the original aim of the F.N.C.L. was concerned, it made no claim of being a substitute for a French government, but only served temporarily as a military headquarters until the French people were able to elect their own government in a constitutional way. This, at least, was the essence of De Gaulle's broadcasts to the French people. No military headquarters needs or ever before asked for recognition from other governments.

Smaller blunders in the field of foreign politics followed, including, eg., unsuccessful supposedly secret meetings with Turkish and anti-Fascist Italian circles concerning the danger of post-war Anglo-American control over the Mediterranean. Nothing aroused more suspicion and served the F.N.C.L. to a greater disadvantage. French fear about this possible Anglo-American control may be justified, but the time to act was chosen rather poorly.

At present, and especially several weeks ago, De Gaulle and his newly-formed jury indulged in a series of mock trials in the Nazi style. Former Vichyites were convicted for treason. They might have been guilty of cooperating with the Vichy regime: 80 percent of the French people, however, have and now are, by force, cooperating with the Vichy government to various extents, and the prospect of facing a trial for this certainly does not aid De Gaulle in getting the French people on his side.

Typical was last week's trial of a former minor official of the Vichy government. He had succeeded in escaping from Vichy France and now found the surprise of his life when he was tried by De Gaulle's purgers and convicted to death. The ridiculous thing about this trial was that most of the jury were former Vichyites. When the death sentence was pronounced, the defender said "Quoiqu'll arrive: Viva la France." (Come what may: long live France.) These words will make somewhat of a martyr of him and will remind the French of the injustices committed in the name of their liberation.

There is still some hope that, due to America's influence, the Giraud group may come back into the picture again. For the sake of the French people as well as for the sake of a speedier victory due to the increased help of the French, the majority of whom are at heart opposed to De Gaulle, this return to the Giraud policy of more truly democratic government should be of greatest concern to all of us.

The first thing I want to address is Opa's sweet idea that the French were defeated because they had quit building an army and focused on their cultural renewal. That's a nice thought, but I'm not so sure it has any merit. History tells me (historians- PLEASE correct me if I'm wrong) that France was actually fairly well militarized, and they were well aware of the militarization and armament of their neighbor, Germany. It seems it would have been naive for them to ignore those signs and not do any work to prepare themselves. I'm fairly certain they were as prepared as they thought they should be, and with their British and Polish allies- they thought they had safety in numbers. Their defeat was a shock to everyone, themselves included. It does not diminish France's greatness, but I don't think we need to make excuses for them. I'm not exactly sure why Opa felt the need to do that.

Opa lays out an argument that the success of France and the best option for the Allied post-war Europe is if Giraud regains control and is able to steer the new government of freed France. Even as I was reading it, I thought- gosh- I know the de Gaulle name pretty well, but vaguely know the Giraud name. That's because Giraud was not successful in the way Opa had hoped. I'm not sure that it was a complete disaster, as de Gaulle seems to have proven himself as a leader in French history.

The unfortunate situation of the execution of the Vichy officer is sad, but I do feel that by comparison, the same argument could have been used to ask for leniency for Nazi officers. Wartime is a tricky place for justice.

I do feel a slightly condescending tone in this whole article. Opa pities the French, saying they are great even if they lost. It's because, bless their hearts, they were making love, not war. Then he goes on to criticize how they governed themselves, how they punished war crimes (perceived or not), and how they worked out their suspicions of post-war issues. He claims Geraud would be best for France, but what he really means is that he would be best for America. I'm sure the French loved that.