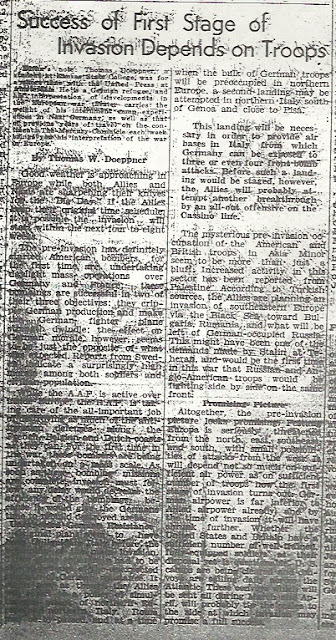 Article written by Opa for the Manhattan, Kansas Newspaper: The Mercury Chronicle

Success of First Stage of Invasion Depends on Troops

Editor's note: Thomas Doeppner, a student at Kansas State College, was for a short time with the United Press at Amsterdam. He is a German refugee, and his interpretation of developments in the European war theater carries the weight of his internment camp experiences in Nazi Germany, as well as that of previous years of travel on the continent. The Mercury Chronicle each week brings you his interpretation of the war in Europe.

Good weather is approaching in Europe while both Allies and Nazis are sharpening their knives for the "Big Day." If the Allies keep their original time schedule, it is possible the invasion will start within the next four to eight weeks.

The pre-invasion has definitely started. American bombers, for the first time, are undertaking daylight mass operations over Germany and France, these bombings are successful in two of their three objectives: they cripple German production and make the German fighter plane strength dwindle; the effect on German morale, however, seems to be just the opposite of what was expected. Reports from Sweden indicate a surprisingly high morale among both soldiers and civilian population.

While the A.A.F. is active over inside Europe, the R.A.F. is taking care of the all-important job of destroying as much of the anti-invasion defenses along the French, Belgian, and Dutch coasts as they can. For the first time in the war, these bombers are being undertaken on a mass scale. As soon as these bombing missions are complete, invasion must follow, any delay would decrease the efficiency of the bombings because it would give the Germans time to rebuild destroyed areas.

Original plans seem to have been ***** Italy before the beginning of the main invasion. *** plans *** had to be *** the unexpected ** of German resistance. It may seem as though the Allies have adopted a policy of simultaneous attack of northern Europe and northern Italy. Rome may be by-passed, and at a time when the bulk of German troops will be preoccupied in northern Europe, a second landing may be attempted in northern Italy south of Genoa and close to Pisa.

This landing will be necessary in order to provide air bases in Italy from which Germany can be exposed to three or even four front bomb attacks. Before such a landing would be staged, however, the Allies will probably attempt another breakthrough by an all out offensive on the Cassino line.

The mysterious pre-invasion occupation of the American and British troops in Asia Minor seem to be more than just a bluff. Increased activity in this sector has been reported from Palestine. According to Turkish sources, the Allies are planning an invasion of southeastern Europe via the Black Sea toward Bulgaria, Rumania, and what will be left of German-occupied Russia. This might have been one of the demands made by Stalin at Teheran, and would be the first time in this war that Russian and Anglo-American troops would be fighting side by side on the same front.

Altogether, the pre-invasion picture looks promising: Festung Europa is seriously threatened from the north, east, southeast, and south, with small possibilities of attacks from the west. It will depend not so much on sufficient air power as on sufficient number of troops how the first stage of invasion turns out. German airpower is far inferior to Allied airpower already, and by the time of invasion, it will have shrunk further. Whether the United States and Britain have a sufficient number of well-trained, fully-equipped soldiers at their disposal yet is questionable. U.S. camps are being cleared and convoys are sailing daily across the Atlantic. These convoys which will be sent all during March and April, will probably tip the scales to the side at which invasion may promise a full success.

This article was a bear to transcribe, and I may or may not have made up/guessed on some of the words. I think we get the gist of it though.

Festung Europa is the German phrase touting their "European Fortress." The Allies borrowed this phrase to mock them and claim ultimate victory in toppling the so-called walls of the German fortress around Europe.

Right now it is obvious to everyone (including the Axis powers) that something huge is brewing. The Allies have begun bombing the borders leading to Germany's strongholds- and there is a steady stream of troops mobilizing around the world to various potential invasion spots. The Allies are making a slow and steady entrance towards what they hope to be the finishing blow to the Axis powers.

Ironically, with all this smoke, the Axis powers (particularly the Germans) do not seem to be afraid of the coming fire. I'm not sure if that was really true. I wonder if the morale for some Germans was high because they also had been hoping for the invasion, the sooner the better. They may suffer the consequences, but nothing could be worse than a country at constant war with no regard for the least of their citizens. Or perhaps they were all deluded that because they were a superior race and cause, that they would win. It's hard to really capture the actual emotions of the people.

I think it's a little bit funny that Opa's title is "Success of First Stage of Invasion Depends on Troops. " I'm not exactly sure how the troops could get out of that responsibility. As powerful and imminent as the Allied victory seems, the troops lining up for this big push into Axis territory must have been terrified. For many of them, they had to know that the success was not going to be an easy gain. It was maybe inevitable, but that inevitability included great sacrifice. Opa is asking if they were willing and able. I think it is pretty clear they are, the world will soon know.

There isn't much to talk about in this time of waiting and preparation. It's one of my least favorite things that I see in news- when they report on things that haven't happened. They make whole reports on guesses and speculation, with the understanding that absolutely nothing they say may turn out to be true. This is unfortunately Opa's new role in his article writing: the world sees the preparation, everybody is talking about what the main event will look like.

What will become of Festung Europa? Can you imagine a history in which the invasion fails?