March 1944: The Engineer: Efficiency For War 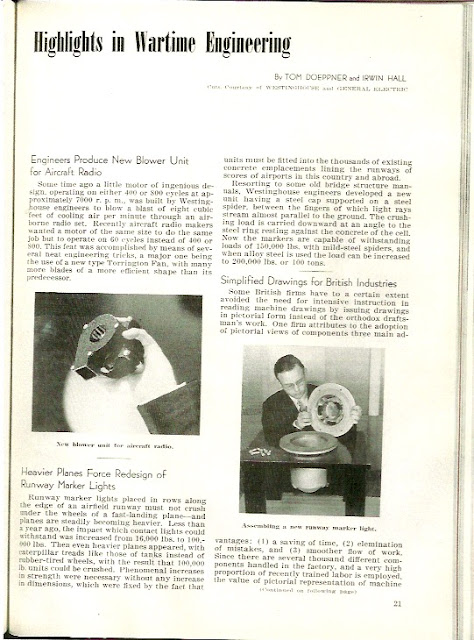 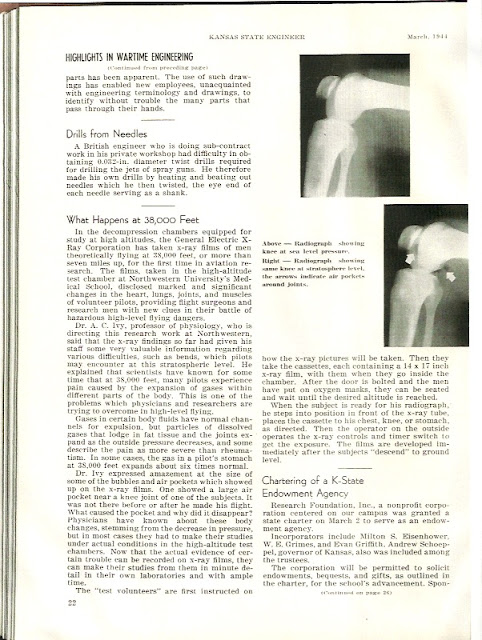 By Tom Doeppner and Irwin Hall

Some time ago a little motor of ingenious design, operating on either 400 or 800 cycles at approximately 7000 r.p.m., was built by Westinghouse engineers to blow a blast of eight cubic feet of cooling air per minute through an airborne radio set. Recently aircraft radio makers wanted a motor of the same size to do the same job but to operate on 60 cycles instead of 400 or 800. This feat was accomplished by means of several neat engineering tricks, a major one being the use of a new type Torrington Fan, with many more blades of a more efficient shape than its predecessor.

Runway marker lights placed in rows along the edge of an airfield runway must not crush under the wheels of a fast landing plane - and planes are steadily becoming heavier. Less than a year ago, the impact which contact lights could withstand was increased from 16,000 lbs. to 100,000 lbs. Then even heavier planes appeared, with caterpillar treads like those of tanks instead of rubber-tired wheels, with the result that 100,000 lb. units could be crushed. Phenomenal increases in strength were necessary without any increase in dimensions, which were fixed by the fact that units must be fitted into the thousands of existing concrete emplacements lining the runways of scores of airports in this country and abroad.

Resorting to some old bridge structure manuals, Westinghouse engineers developed a new unit having a steel cap supported on a steel spider, between the fingers of which lights rays stream almost parallel to the ground. The crushing load is carried downward at an angle to the steel ring resting against the concrete of the cell. Now the markers are capable of withstanding loads of 150,000 lbs. with mild-steel spiders and when alloy steel is used the load can be increased to 200,000 lbs. or 100 tons.

Some British firms have to a certain extent avoided the need for intensive instruction in reading machine drawings by issuing drawings in pictorial form instead of the orthodox drafts-man's work. One firm attributes to the adoption of pictorial views of components three main advantages: (1) saving of time, (2) elimination of mistakes, and (3) soother flow of work. Since there are several thousand different components handled in the factory, and a very high proportion of recently trained labor is employed, the value of pictorial representation of machine parts has been apparent. The use of such drawings has enabled new employees, unacquainted with engineering terminology and drawings, to identify without trouble the many parts that pass through their hands.

A British engineer who is doing sub-contract work in his private workshop had difficulty in obtaining 0.032-in. diameter twist drills required for drilling the jets of spray guns. He therefore made his own drills by heating and beating out needles which he then twisted, the eye end of each needle serving as a shank.

In the decompression chambers equipped for study at high altitudes, the General Electric X-Ray Corporation has take x-ray films of men theoretically flying at 38,000 feet, or more than seven miles up, for the first time in aviation research. The films, taken in the high-altitude test chamber at Northwestern University's Medical School, disclosed marked and significant changes in the heart, lungs, joints, and muscles of volunteer pilots, providing flight surgeons and research men with new clues in their battle of hazardous high-level flying dangers.

Dr. A.C. Ivy, professor of physiology, who is directing this research work at Northwestern, said that the x-ray findings so far had given his staff some very valuable information regarding various difficulties, such as bends, which pilots may encounter at this stratospheric level. He explained the scientists have known for some time that at 38,000 feet, many pilots experience pain caused by the expansion of gases within different parts of the body. This is one of the problems which physicians and researchers are trying to overcome in high-level flying.

Gases in certain body fluids have normal channels for expulsion, but particles of dissolved gases that lodge in fat tissue and the joints expand as the outside pressure decreases, and some describe the pain as more severe than rheumatism. In some cases, the gas in a pilot's stomach at 38,000 feet expands about six times normal.

Dr. Ivy expressed amazement at the size of some bubbles and air pockets which showed up on the x-ray films. One showed a large air pocket near a knee joint of one of the subjects. It was not there before or after he made his flight. What cause the pocket and why did it disappear? Physicians have known about these body changes, stemming from the decrease in pressure, but in most cases they had to make their studies under actual conditions in the high-altitude test chambers. Now that the actual evidence of certain trouble can be recorded on x-ray films, they can make their studies from them in mint detail in their own laboratories and with ample time.

The "test volunteers" are first instructed on how the x-ray pictures will be taken. Then they take the cassettes, each containing a 14 X 17 inch x-ray film, with them when they go inside the chamber. After the door is bolted and the men have put on oxygen masks, they can be seated and wait until the desired altitude is reached.

The Engineer articles are always a fascinating snap-shot of the booming technology and research that happened during this time of great demand for engineering genius. Most of this article is touting the most recent engineering answers to increasing demands that everything be even stronger and more efficient.

There is a part of me that wonders if I had been trained a bit differently if I would have made a good engineer. I love to make things more efficient. But perhaps that is simply because I was raised by an engineer (who was the son of an engineer). I am the queen of packing a car trunk, everything fits. I am always looking for ways to make less trips, use less gas, make the most logical sense.

For war time, efficiency can mean the difference of defeat or victory. If all your runway lights get crushed, that's no good. If you can't load your planes or have heavier, sturdier planes- that's no good. I'll ignore the fact (as I've already lamented it) that progress seems to always come rushing in for war rather than peace. The description of the engineering tricks based on bridge building concepts made me think of when I was in a thing called Odyssey of the Mind as a kid. There were different types of tasks that a team of students would try to complete. Some were long-term tasks presented at a competition, some were presented the day of for quick-response. One specific "problem" or task was a building one. My team never chose this one and opted for the more theatrical tasks. However, I saw a team of kids build structures out of mere ounces of balsa wood sticks that carried loads of over 1000 lbs. I was absolutely amazed. It was my first introduction to the magic of engineering even if I didn't recognize it as that. So these lights that can withstand a plane landing on them without breaking because of some small structure build in and around them- it's that same problem. You have to use materials that weigh this much, fit these parameters, and can handle this much pressure. Solve.

Despite the fact that most problems were how to be more destructive (or I guess to say it positively: how to be less destroyed)- I imagine the engineers were giddy with the challenges they faced every day. New problems to solve, and these problems directly affected the war and how well the Allied forces were prepared. For an engineer, their genius in solving these problems likely saved Allied lives. That's pretty rewarding.


Lastly, the studies on pilots and what they endure physically was a new thing for me. I suppose if you asked if it was physically challenging I would have said yes, but I didn't realize the extent to which they pushed their bodies to the limits.

I kinda want to be an engineer now. Is there a job market for efficient packing of the car trunk?
Posted by Sarah Snow at Wednesday, August 29, 2018