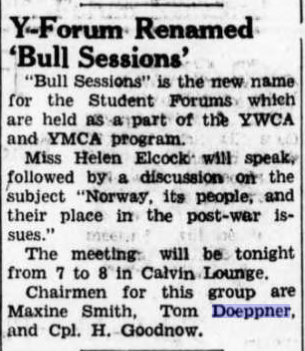 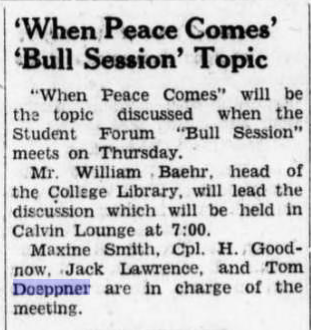 "Bull Sessions" is the new name for the Student Forums which are held as a part of the YWCA and YMCA program.

Miss Helen Elcock will speak followed by a discussion on the subject "Norway, its people, and their place in the post-war issues."

The meeting will be tonight from 7 to 8 in Calvin Lounge.

Chairmen for this group are Maxine Smith, Tom Doeppner, and Cpl. H Goodnow.

"When Peace Comes" will be the topic discussed when the Student Forum "Bull Session" meets on Thursday.

Mr. William Baehr, head of the College Library, will lead the discussion which will be held in Calvin Lounge at 7:00.

Maxine Smith, Cpl. H. Goodnow, Jack Lawrence, and Tom Doeppner are in charge of the meeting.

Bull Sessions. About Peace. I'm not sure who came up with the new phrase for these hot-topic forums, but it feels a little intense to call a discussion a "Bull Session."

I'm reminded of what we do when we have no control. We speculate to death. I'm not saying it's wrong to discuss and wonder and debate. I'm feeling the psychological weight of what it means to be a part of a world-wide disaster and have nothing tangible that you can really do. This is why war bonds and other efforts to get regular folks involved were so popular, it gave people a sense of purpose and meaning when faced with the giant conflict abroad. Opa must have felt especially helpless, with family members in war zones and concentration camps, and absolutely no power to do anything and no way of knowing what was actually happening.

Maybe this is why Opa was involved in so many activities, he needed to move and act in any way possible to relieve that feeling of helplessness.

I have that same sensation sometimes. I am either paralyzed by helplessness or I spin circles reading, thinking, discussing.  I might volunteer somewhere or give money to some non-profit in hopes that my action somehow put a dent in the huge conflicts that I have little control over. In the end, sometimes it all feels like Bull.