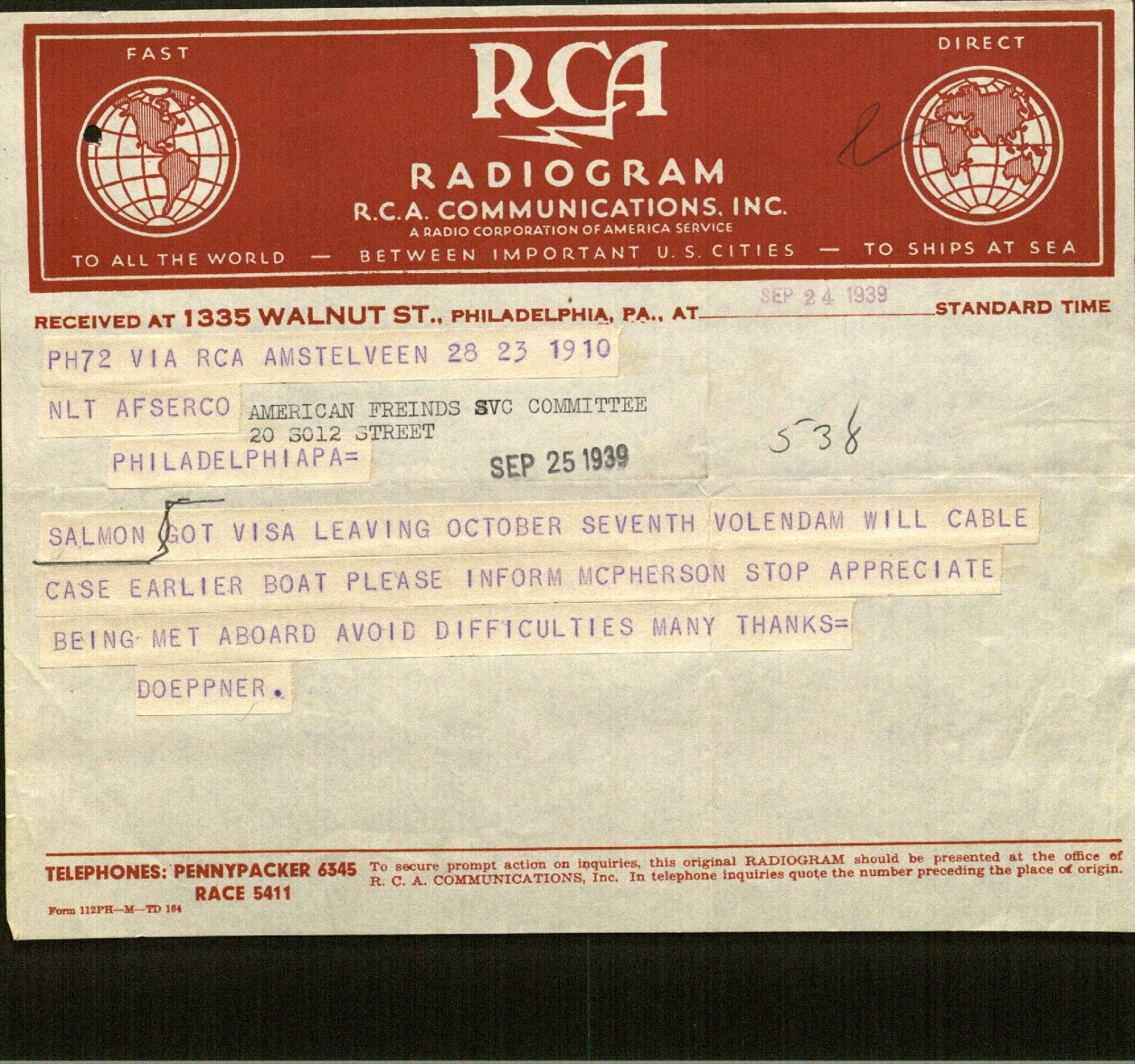 Telegram from Opa to Charlotte at AFSC 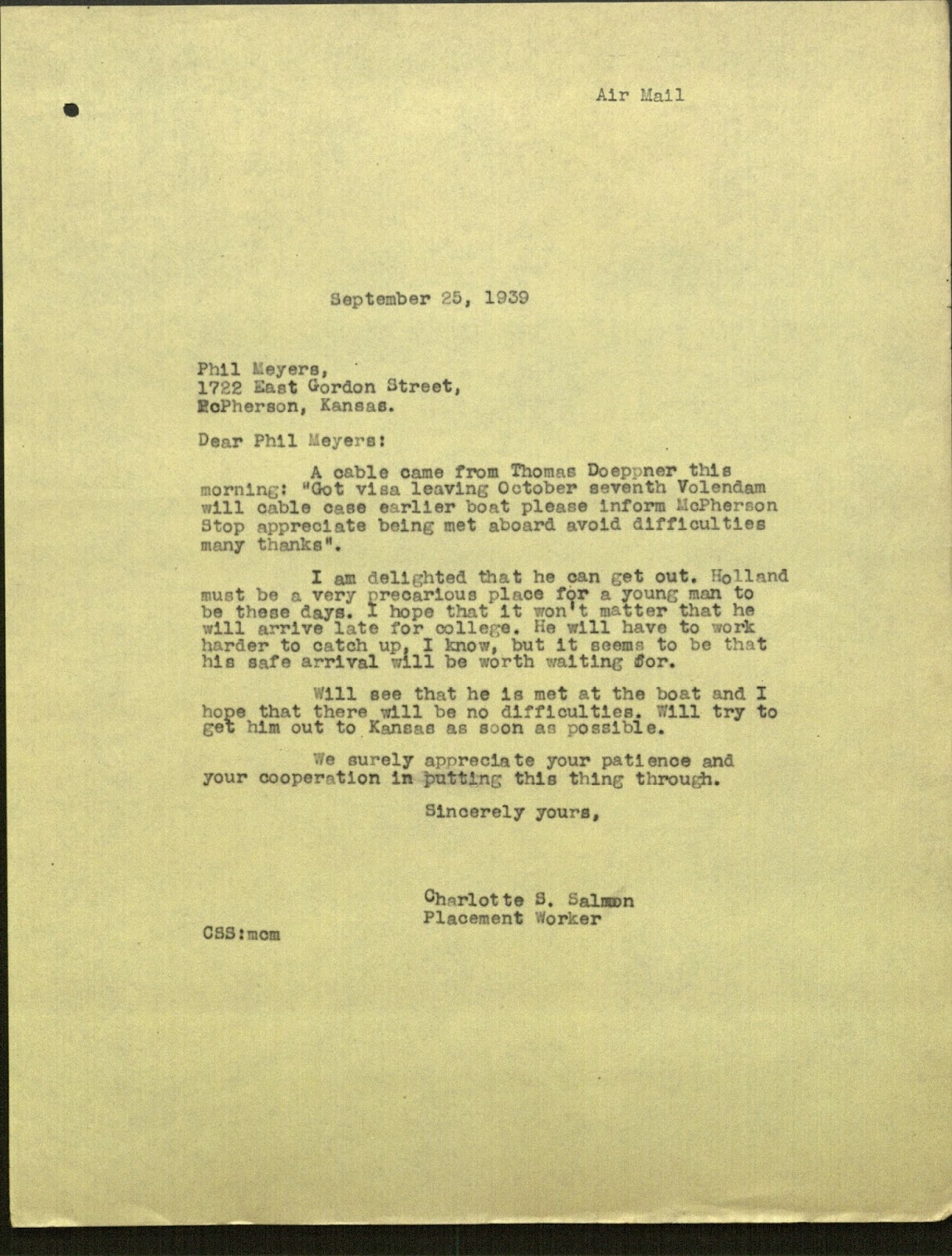 I am delighted that he can get out. Holland must be a very precarious place for a young man to be these days. I hope that it won't matter that he will arrive late for college. He will have to work harder to catch up, I know, but it seems to be that his safe arrival will be worth waiting for.

Will see that he is met at the boat and I hope that there will be no difficulties. Will try to get him out to Kansas as soon as possible.

We surely appreciate your patience and your cooperation in putting this thing through. 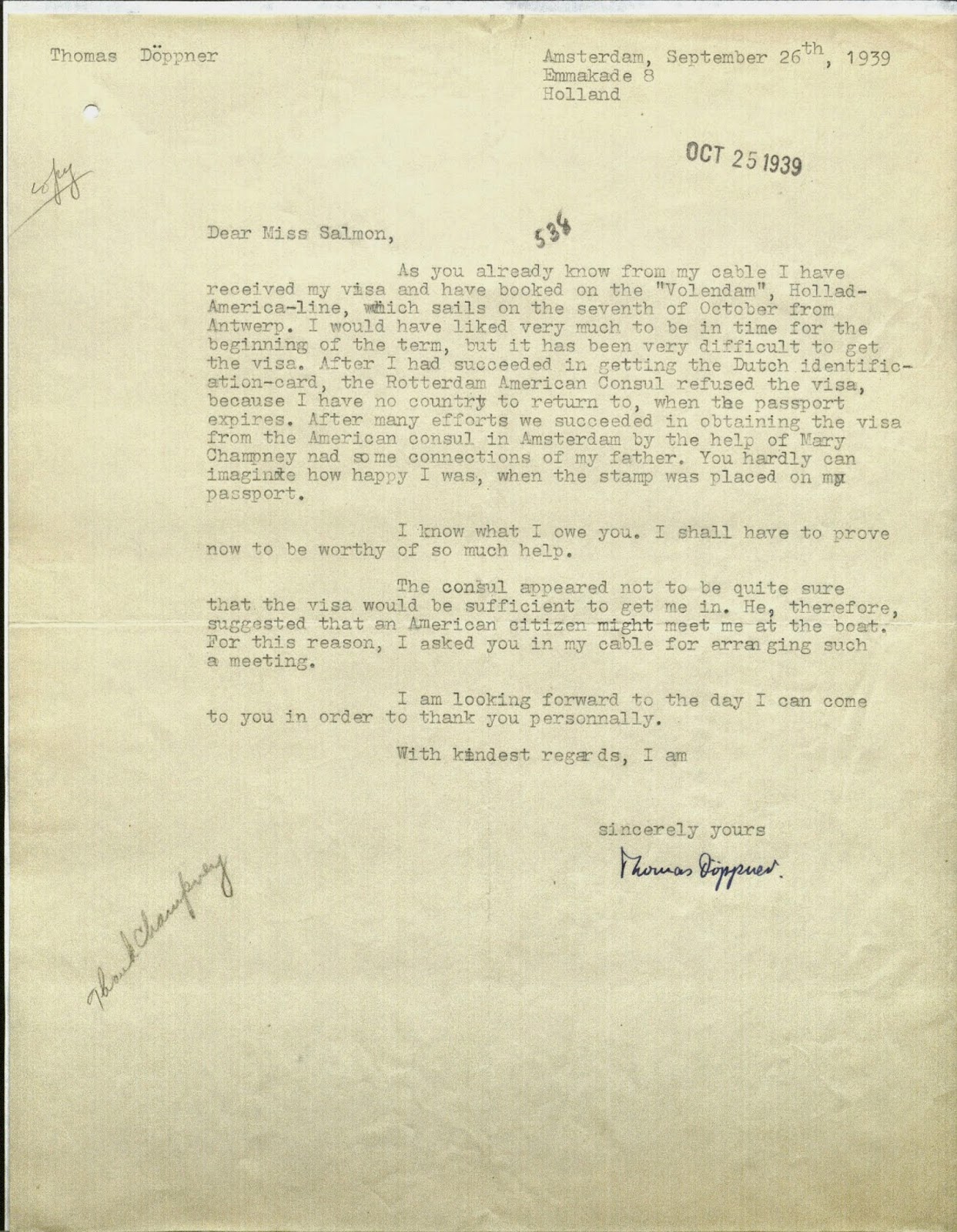 Letter from Opa to Charlotte Salmon at AFSC

As you already know from my cable I have received my visa and have booked on the "Volendam", Holland-America-line, which sails on the seventh of October from Antwerp. I would have liked very much to be in time for the beginning of the term, but it has been very difficult to get the visa. After I had succeeded in getting the Dutch-identification-card, the Rotterdam American Consul refused the visa, because I have no country to return to, when the passport expires. After many efforts we succeeded in obtaining the visa from the American consul in Amsterdam by the help of Mary Champney and some connections of my father. You hardly can imagine how happy I was, when the stamp was placed on my passport.

I know what I owe you. I shall have to prove now to be worthy of so much help.

The consul appeared not to be quite sure that the visa would be sufficient to get me in. He, therefore, suggested that an American citizen might meet me at the boat. For this reason, I asked you in my cable for arranging such a meeting.

I am looking forward to the day I can come to you in order to thank you personally.

With kindest regards, I am
sincerely yours
Thomas Doppner.

The other day I confessed to my husband that I never learned how to do a cartwheel as a child. He was astonished. He told me he thought he could still do one. My husband is 6’3” and well over 200 lbs. I scoffed. He then walked out into the grass and proceeded to do the most hilariously perfect cartwheel. It really was perfect. I laughed so hard.


After reading these letters, I really do wish I had learned to do cartwheels, because that’s pretty much the only response I can picture for this news. He got the stamp on his passport- finally he can leave! Time is increasingly precious and Opa has secured himself a ticket on the Volendam, set to depart on October 7th. He might be late for school, but better late than never! (This cliche was a little too perfect- so I had to use it.)


Charlotte immediately forwards the information from the cable in a letter to Phil Meyers, who I’m sure was thrilled to share with the folks on McPherson’s campus, that their “delayed refugee” was one step closer.


Opa sent a follow up letter that would arrive later to fill in the details of the cable. He had secured his visa with even more finagling and connections. My guess is that the slew of letters we read in this blog had some help to contribute. Opa ran into the same problem most refugees were running into- the infinite catch-22 that the refugees would not have a home to return to. This no-mans-land stranded them wherever they were unless through some cunning, persistence, and luck- they were able to find a loophole. Opa’s luck had not run out: his father’s residency in unoccupied Holland and Opa’s age-appropriate desire to attend college in America worked the trick. He would sail for the USA on October 7th.

It amazed me to see that this letter was stamped by the AFSC "October 25, 1939." I believe that is the day they received it. I think mail has gotten a little slower for Europe because of the changing political climate.


Opa offers his sincere appreciation for all that the AFSC had done for him, and made the vow to “be worthy of so much help.”


Lastly, he explains that even his stamped passport may not be solid enough when he arrives on American soil, and requests that an American citizen meet him at the port.

I tried to imagine what Opa felt like during this process. Every single victory was such a tenuous thing. Every single step forward was achieved by so much effort, and none of it was a sure step forward. All of it could be erased in a minute, a military strike, a signature. Even this victory was held in balance by the warning of the consul that Opa have an American citizen meet him at the boat. My stomach knots just imagining this process. I have heard (and even said) that when something is right, it just falls into place. This is clearly not always the case. Sometimes the right thing must be fought for: every tiny step and victory must be carved out of a relentless and merciless system. But even then, it's worth it.


Maybe Charlotte did do a cartwheel. Let’s pretend she did.
Posted by Sarah Snow at Saturday, April 25, 2015