Macampusans have been not a little worried over the fate of their non-Aryan student, Thomas Doeppner of Berlin, Germany. Doeppner cabled the Friends Service Committee this week that he is unable to secure a passport but will continue to try.

Last year the International Relations Club and the Student Christian Movement completed a money-raising movement on the campus, to make possible the securing of a non-Aryan Christian student refugee for McPherson college. The Friends Service Committee of America cooperated in securing the highly-recommended German youth.

Thomas Doeppner wired an acceptance to the scholarship offer from Amsterdam on August 15 and stated that he was applying for a passport. In the mad rush for passports caused by the war in Europe he was unable to secure one. If he can not come, another refugee student who is already in America will be secured.

It will be of great interest and benefit to have a student on the campus who is so aware of the European situation and of Hitler's purge there. The student will live in the dormitory and will probably do part-time work. Thomas Doeppner will be classed as a sophomore or a junior. 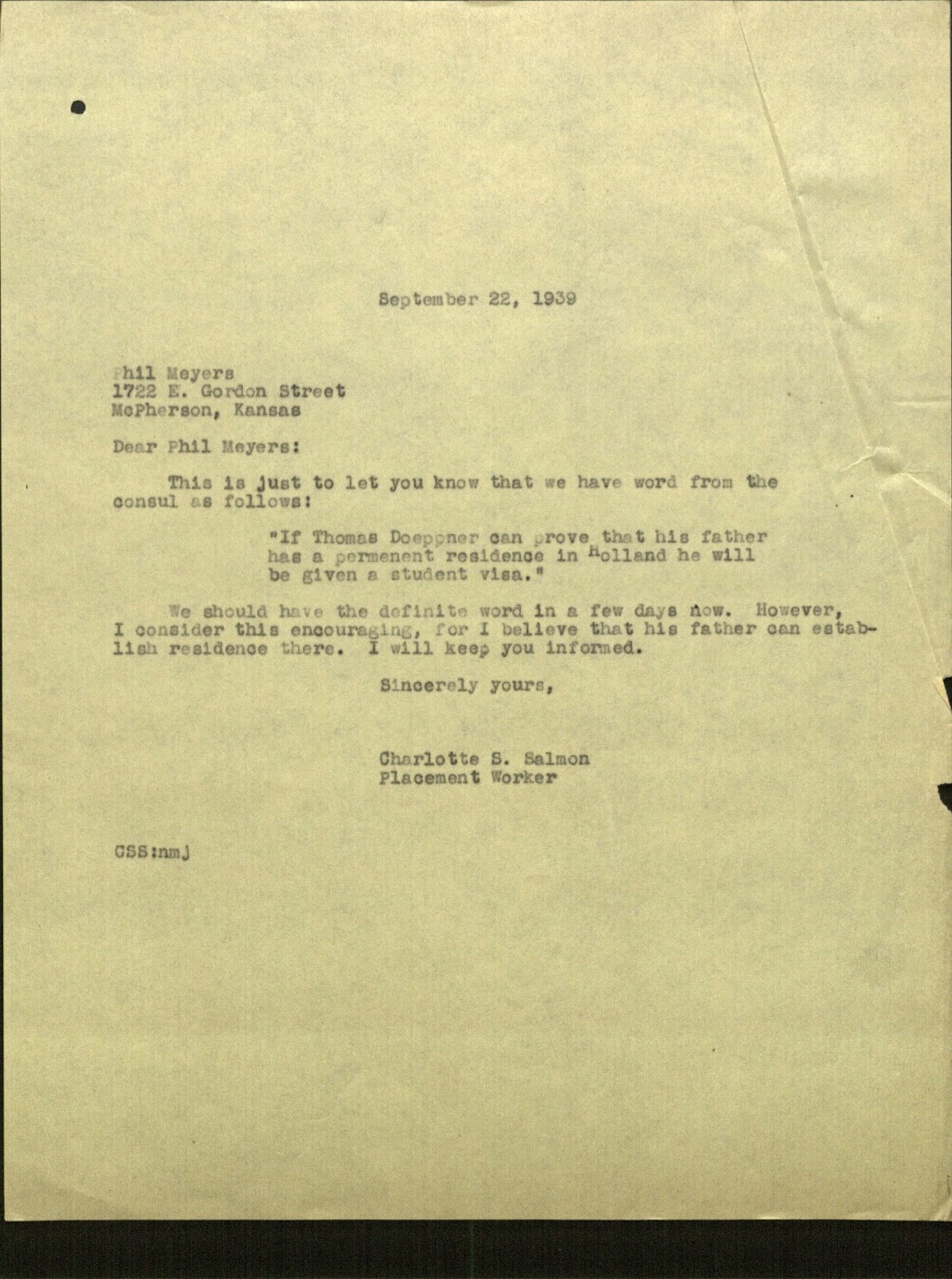 This is just to let you know that we have word from the consul as follows:

"If Thomas Doeppner can prove that his father has a permanent residence in Holland he will be given a student visa."

We should have the definite word in a few days now. However, I consider this encouraging, for I believe that his father can establish residence there. I will keep you informed.

The letter from Charlotte helps to explain what I mentioned in the last blog. There must have been some communication between the Consul and the American Friends Service Committee (AFSC). The letters from August (Opa’s Dad) and his boss that confirmed August’s permanent residency in Amsterdam most certainly should solve the problem. Charlotte seems confident and lets Phil Myers know that things should be moving along smoothly from here on out.

Meanwhile, the local newspaper of McPherson College’s town- The Spectator- writes a little news bit on the delay of Opa. This article was obviously written without the information from Charlotte, but it does a nice job of summing up the information and reason for Opa’s delay. The article shows how invested the entire town of McPherson was in my Opa’s plight and the plight of other German refugees. They waited and looked for him. He wasn’t just some side charity that a few people knew about. What a wonderful community of caring! Also- I am a bit fascinated by how they call him a non-Aryan. I guess technically he was by some standard… It is such an odd descriptor to me.

Is this just my experience? I don’t think that the Jewish population in America are distinguished on any form or paperwork like we distinguish other races and ethnicities. I wonder when and why this shifted. Does anyone out there know?