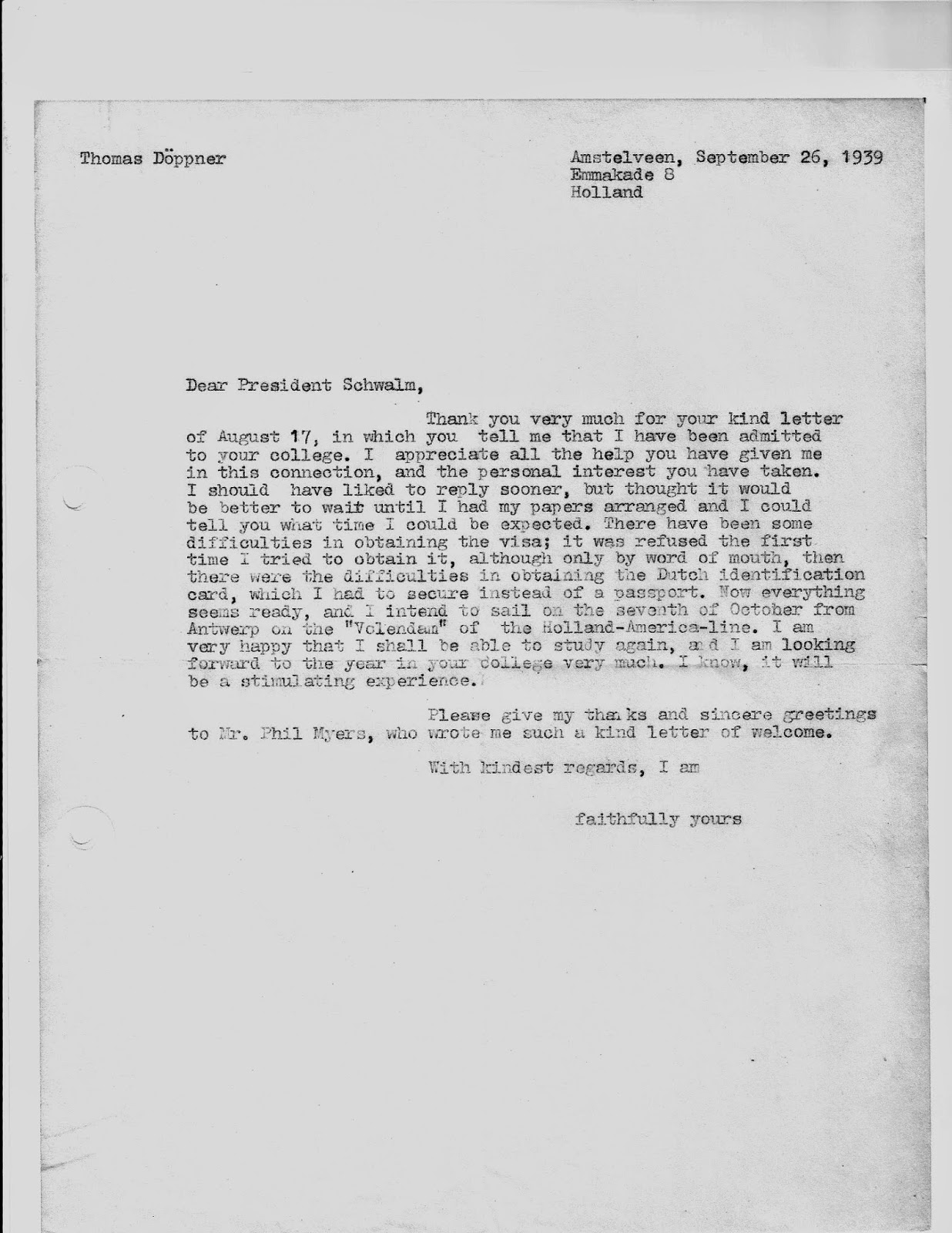 Thank you very much for your kind letter of August 17, in which you tell me that I have been admitted to your college. I appreciate all the help you have given me in this connection, and the personal interest you have taken. I should have liked to reply sooner, but thought it would be better to wait until I had my papers arranged and I could tell you what time I could be expected. There have been some difficulties in obtaining the visa; it was refused the first time I tried to obtain it, although only by word of mouth, then there were the difficulties in obtaining the Dutch identification card, which I had to secure instead of a passport. Now everything seems ready, and I intend to sail on the seventh of October from Antwerp on the "Volendam" of the Holland-America-line. I am very happy that I shall be able to study again, and I am looking forward to the year in your college very much. I know, it will be a stimulating experience.


Please give my thanks and sincere greetings to Mr. Phil Myers, who wrote me such a kind letter of welcome.

With kindest regards, I am faithfully yours 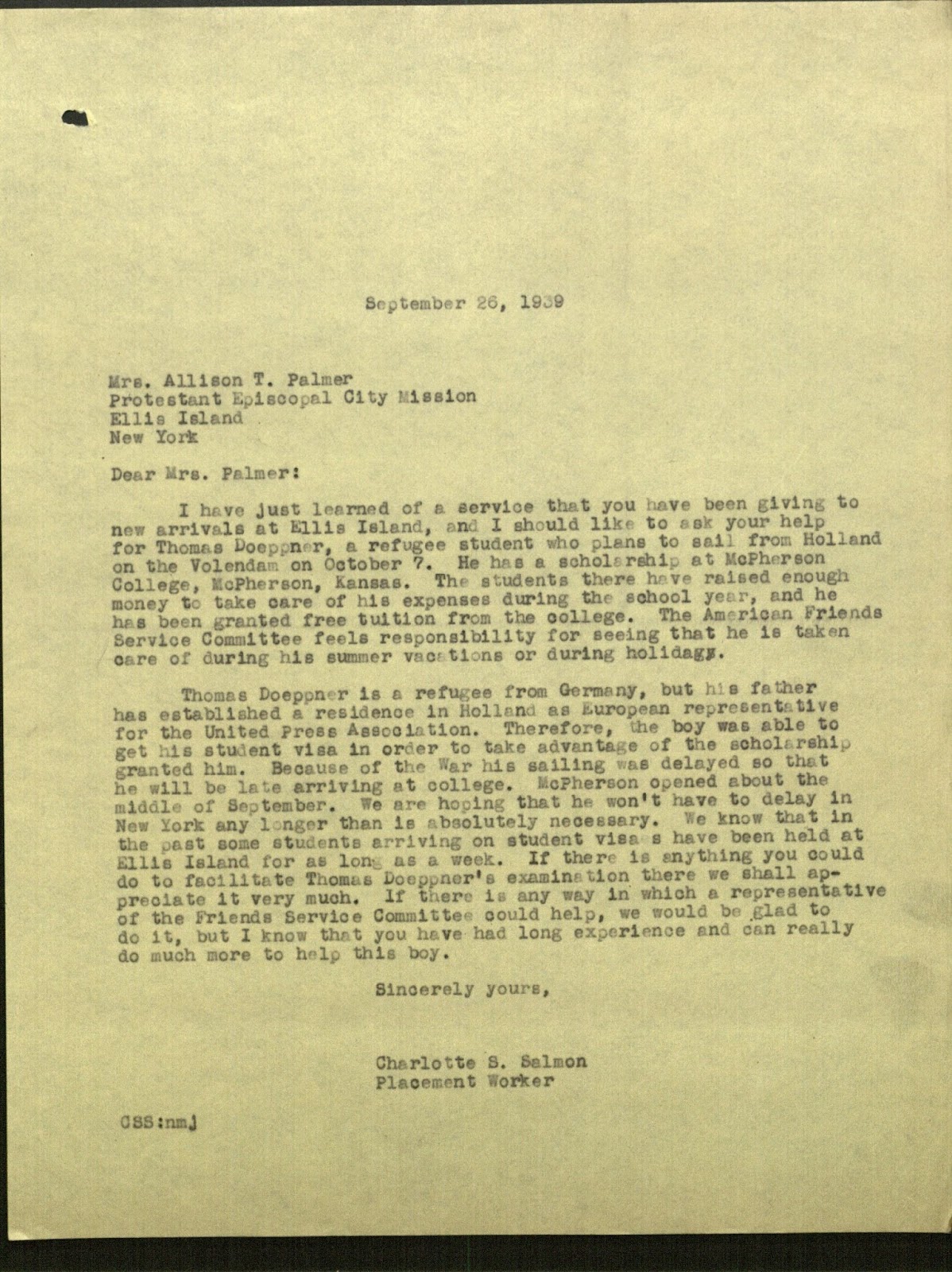 I have just learned of a service that you have been giving to new arrivals at Ellis Island, and I should like to ask your help for Thomas Doeppner, a refugee student who plans to sail from Holland on the Volendam on October 7. He has a scholarship at McPherson College, McPherson, Kansas. The students there have raised enough money to take care of his expenses during the school year, and he has been granted free tuition from the college. The American Friends Service Committee feels responsibility for seeing that he is taken care of during his summer vacations or during holidays.

Thomas Doeppner is a refugee from Germany, but his father has established a residence in Holland as European representative for the United Press Association. Therefore, the boy was able to get his student visa in order to take advantage of the scholarship granted him. Because of the War his sailing was delayed so that he will be late arriving at college. McPherson opened about the middle of September. We are hoping that he won't have to delay in New York any longer than is absolutely necessary. We know that in the past some students arriving on student visas have been held at Ellis Island for as long as a week. If there is anything you could do to facilitate Thomas Doeppner's examination there we shall appreciate it very much. If there is any way in which a representative of the Friends Service Committee could help, we would be glad to do it, but I know that you have had long experience and can really do much more to help this boy.


Opa wrote the president of McPherson College to personally thank him and explain his delay. Now that the swarm of activity had slowed down and he had only to pack and board the ship- he was able to express his sincere appreciation and explain what took him so long.

My favorite part of these selected letters is the very last part of the letter from Charlotte Salmon to the Protestant Episcopal City Mission in Ellis Island. The part when Charlotte asks for help and recognizes that this mission has more experience with helping refugees at Ellis Island. Apparently it is common for refugees to get held up for as long as a week. This seems pretty ridiculous considering the incredibly tedious process that is required before they even arrive. I certainly would be a grumpy girl if I faced more questions and red-tape after getting off a ship that had been across the Atlantic. The refugees were used to roadblocks, but in this tenuous time with so much fear lingering from the places they’ve been, it seems cruel that they would have to jump yet another series of hurdles when they arrived.

Luckily, there were groups like this Protestant Episcopal City Mission who acted as chaplains and social workers to the weary immigrants. We will learn more about that organization and Alice Palmer a bit later.

I think that the American Friends Service Committee (AFSC) were able to be as successful as they were because of their ability to delegate and work with other organizations. They didn’t try to do it all or be experts in every part of the process. They facilitated every part of the process, and when they were beyond their abilities, they connected with someone who was able.
Posted by Sarah Snow at Tuesday, April 28, 2015