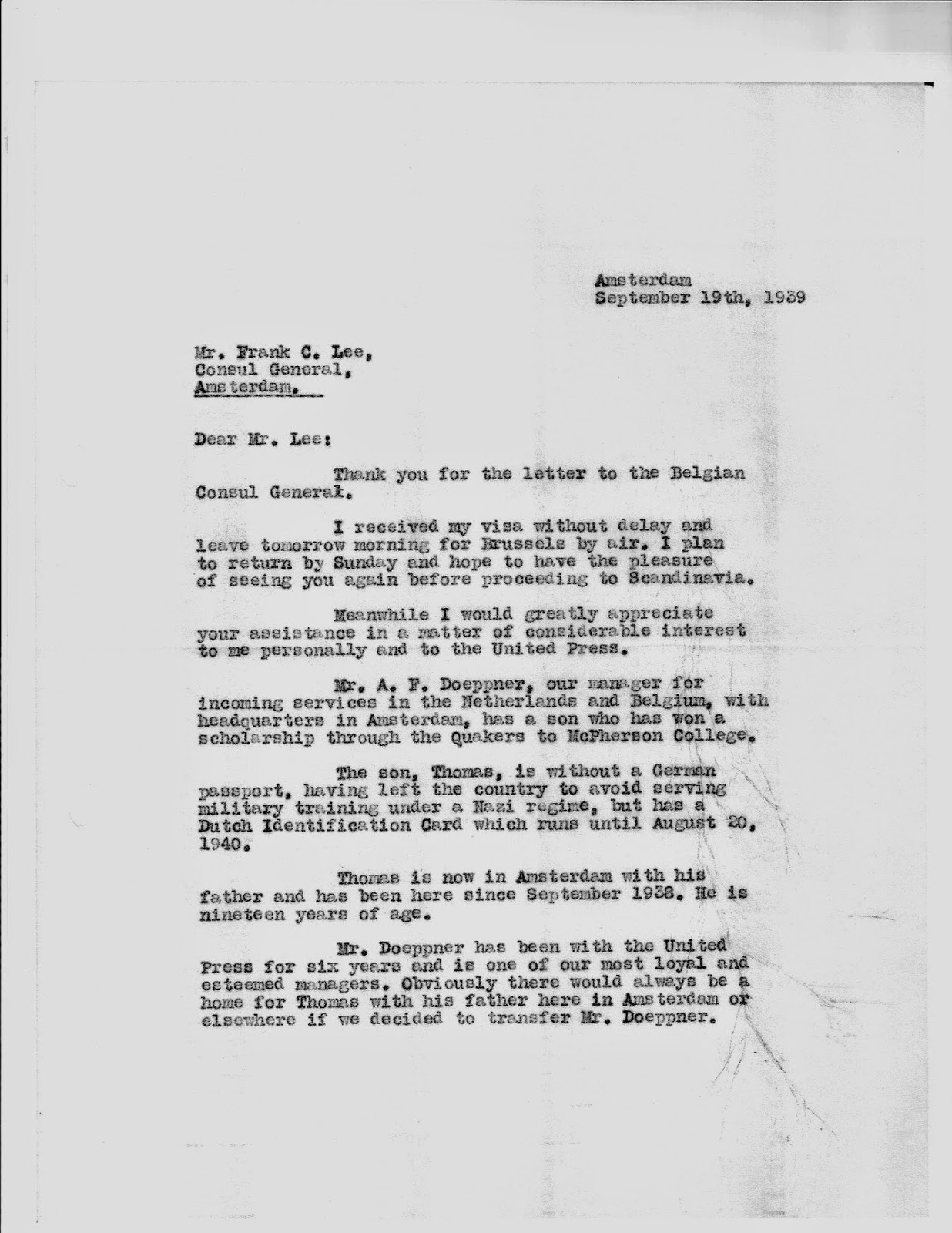 Letter from Chief Editor of United Press to Consul General in Amsterdam, page 1

Thank you for the letter to the Belgian Consul General.

I received my visa without delay and leave tomorrow morning for Brussels by air. I plan to return by Sunday and hope to have the pleasure of seeing you gain before proceeding to Scandinavia.

Meanwhile I would greatly appreciate your assistance in a matter of considerable interest to me personally and to the United Press.

Mr. A. F. Doeppner, our manager for incoming services in the Netherlands and Belgium, with headquarters in Amsterdam, has a son who has won a scholarship through the Quakers to McPherson College.

The son, Thomas, is without a German passport, having left the country to avoid serving military training under a Nazi regime, but has a Dutch Identification Card with runs until August 20, 1940.

Thomas is now in Amsterdam with his father and has been there since September 1938. He is nineteen years of age.

Mr. Doeppner has been with the United Press for six years and is one of our most loyal and esteemed managers. Obviously there would always be a home for Thomas with his father here in Amsterdam or elsewhere if we decided to transfer Mr. Doeppner. 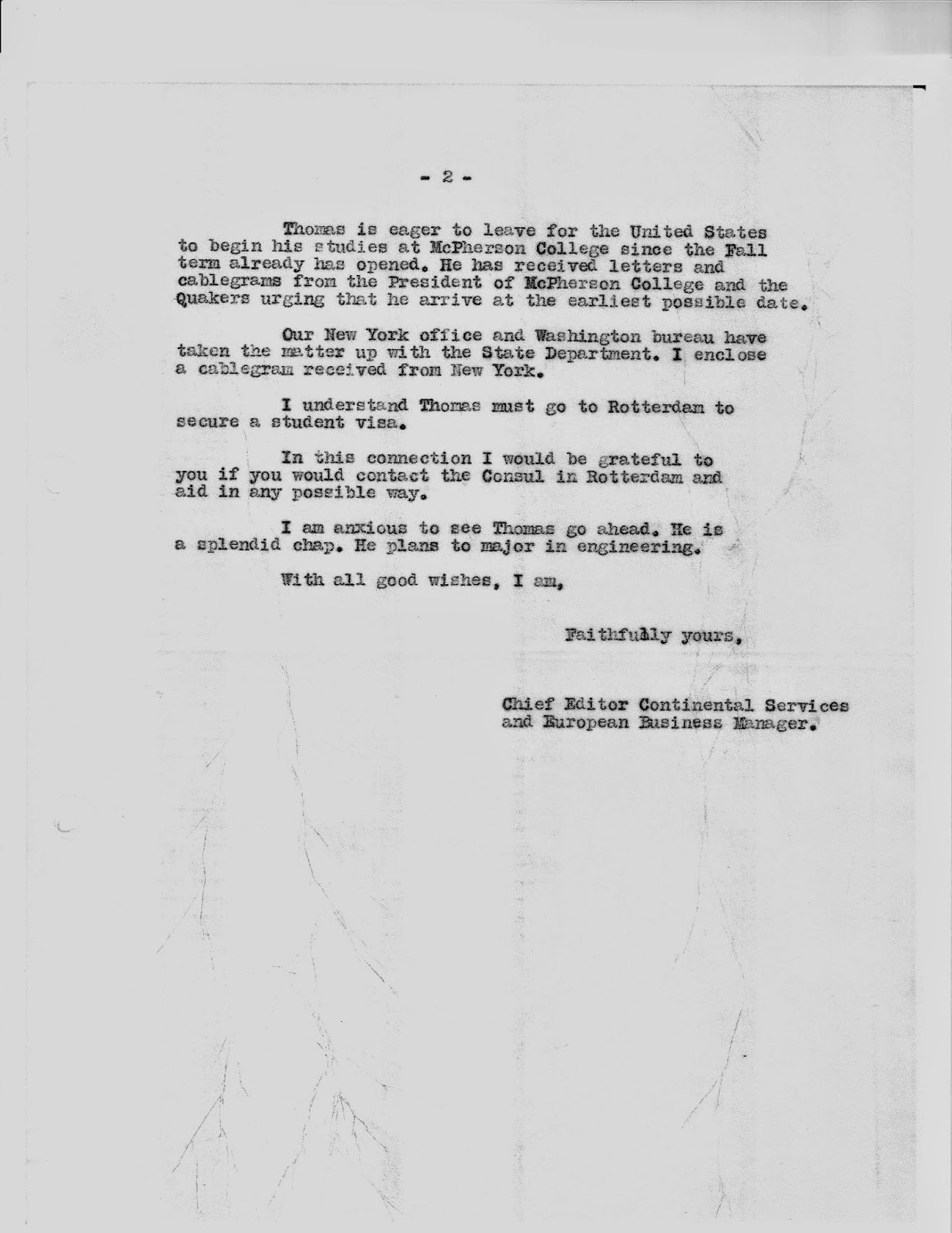 Letter from Chief Editor of United Press to Consul General in Amsterdam, page 2

-  2 -
Thomas is eager to leave for the United States to begin his studies at McPherson College since the Fall term already has opened. He has received letters and cablegrams from the President of McPherson College and the Quakers urging that he arrive at the earliest possible date.

Our New York office and Washington bureau have taken the matter up with the State Department. I enclose a cablegram received from New York.

I understand Thomas must go to Rotterdam to secure a student visa.

In this connection I would be grateful to you if you would contact the Consul in Rotterdam and aid in any possible way.

I am anxious to see Thomas go ahead. He is a splendid chap. He plans to major in engineering.

With all good wishes, I am, 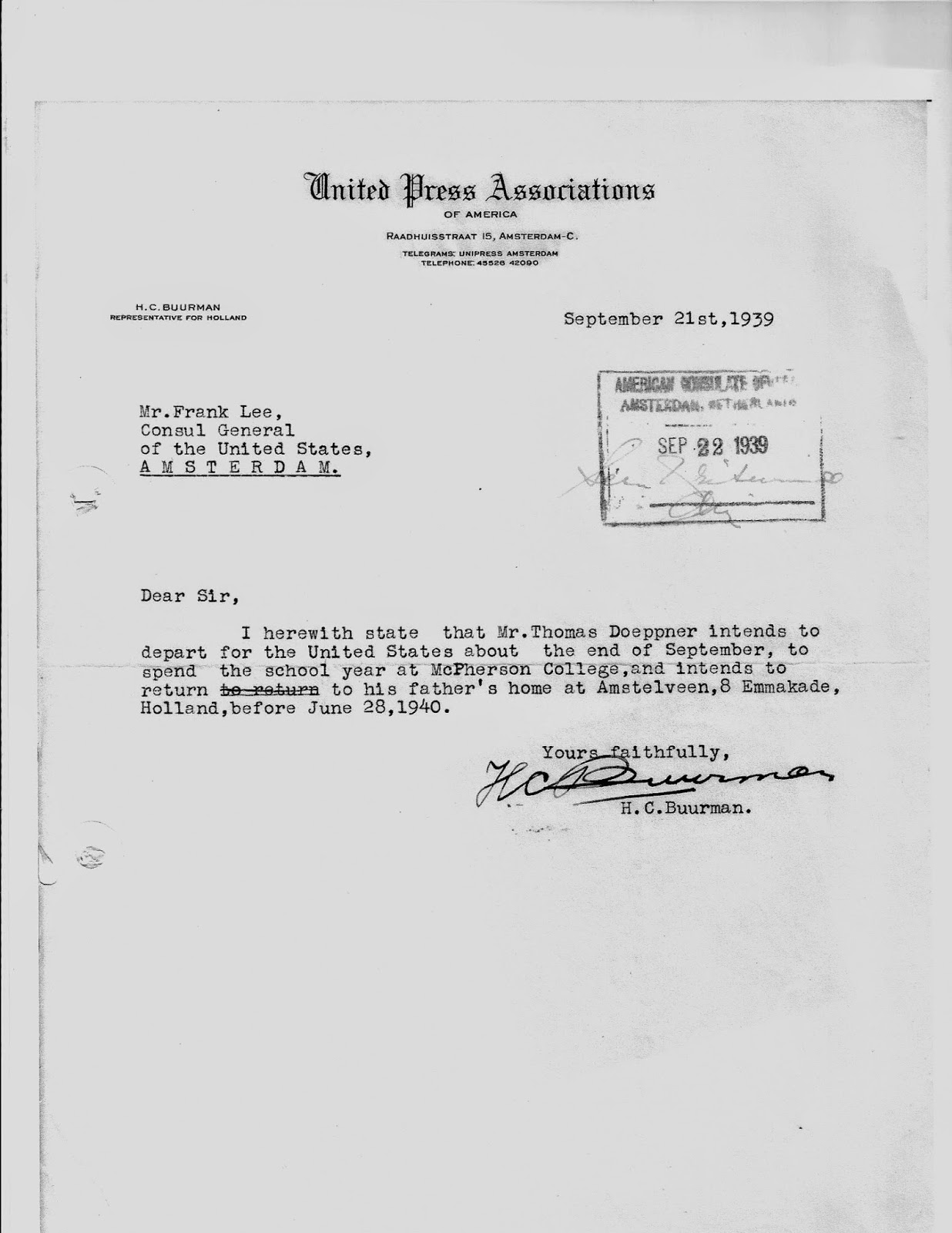 Letter from H.C. Burrman (Representative for Holland with United Press)
to Consul in Amsterdam

I herewith state that Mr. Thomas Doeppner intends to depart for the United States about the end of September, to spend the school year at McPherson College, and intends to return to his father's home at Amstelveen, 8 Emmakade, Holland, before June 28, 1940 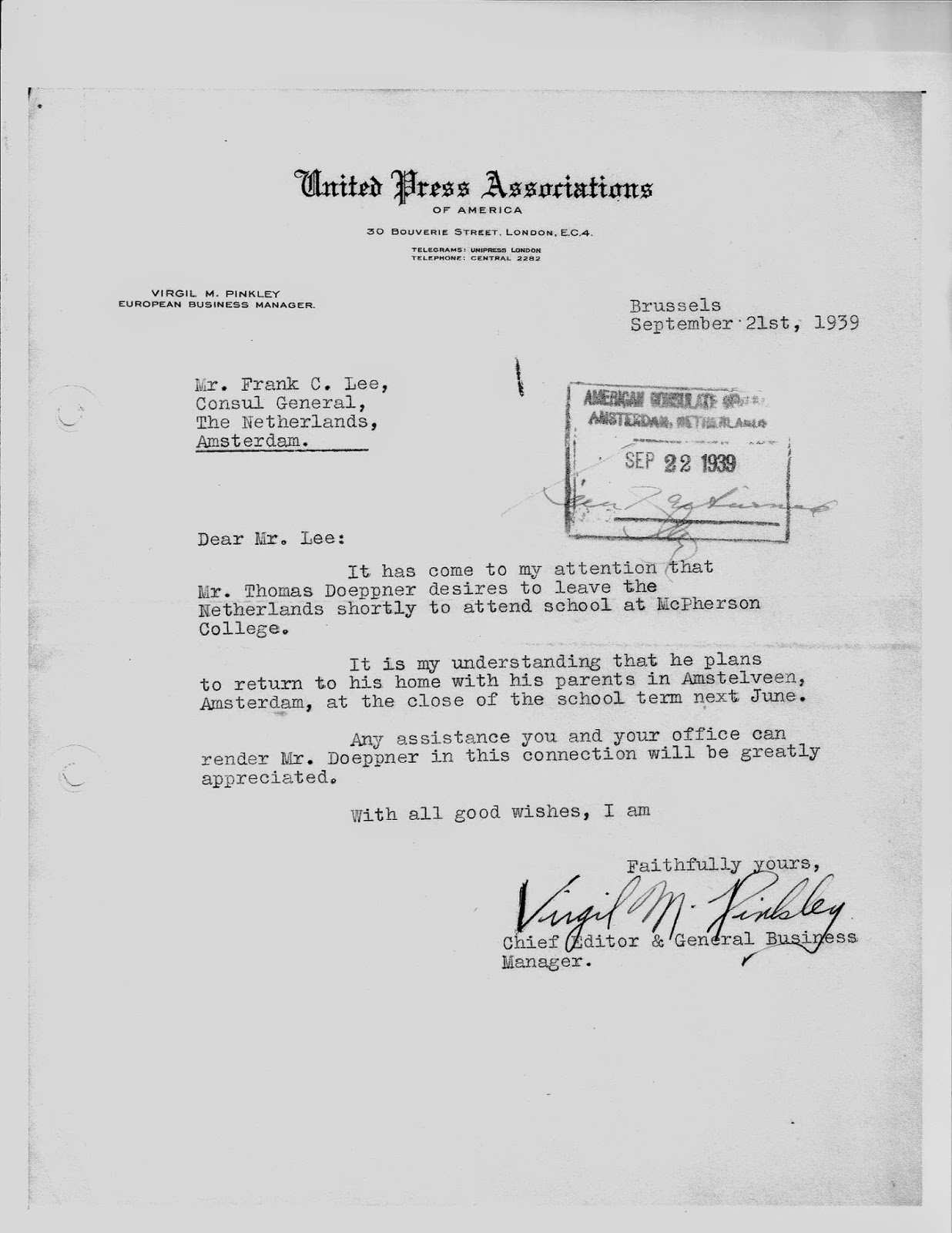 It has come to my attention that Mr. Thomas Doeppner desires to leave the Netherlands shortly to attend school at McPherson College.

It is my understanding that he plans to return to his home with his parents in Amstelveen, Amsterdam, at the close of the school term next June.

Any assistance you and your office can render Mr. Doeppner in this connection will be greatly appreciated.

With all good wishes, I am 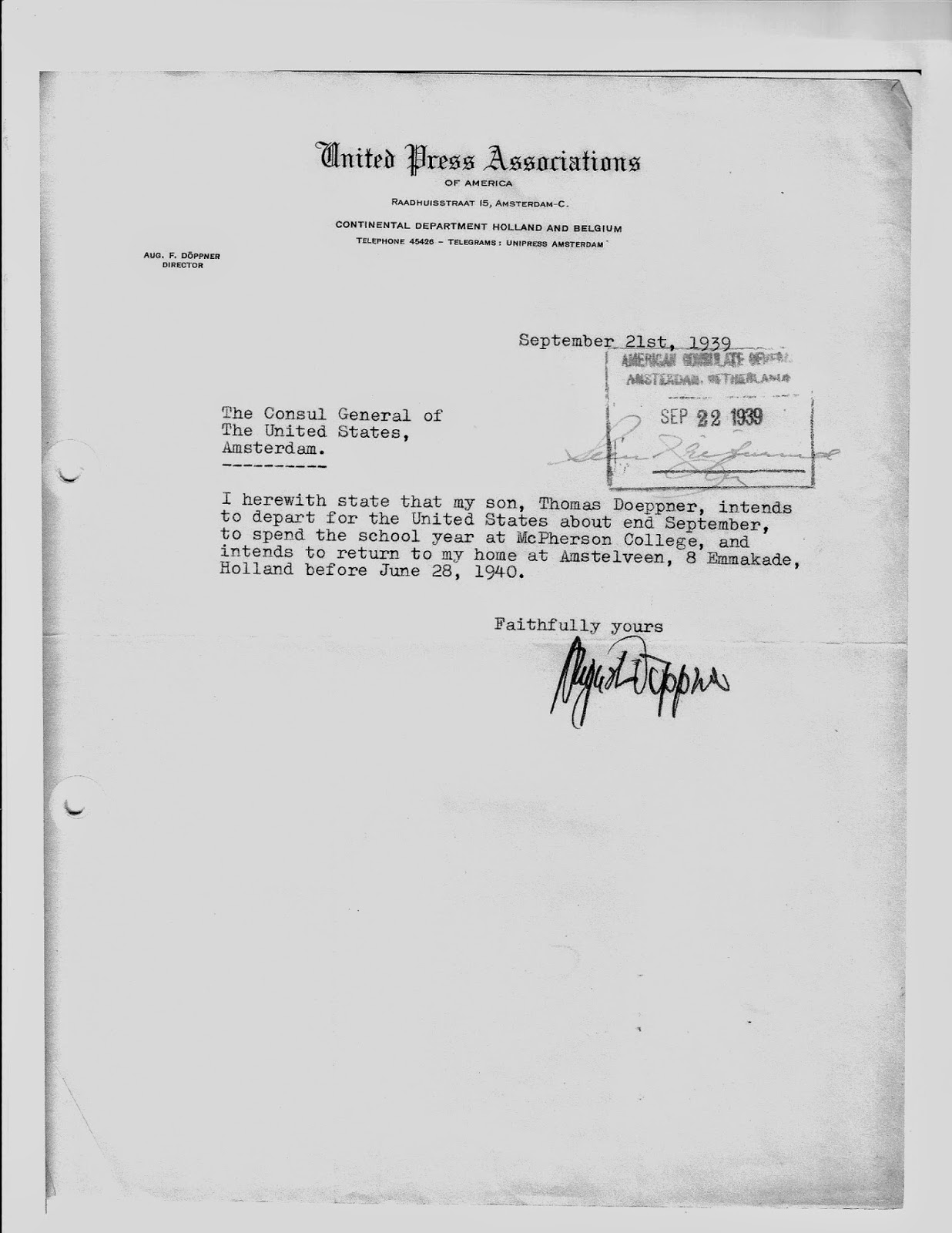 Letter from August (Opa's Dad) to American Consul in Amsterdam

The Consul General of
The United States,
Amsterdam.

I herewith state that my son, Thomas Doeppner, intends to depart for the United States about end September, to spend the school year at McPherson College, and intends to return to my home at Amstelveen, 8 Emmakade, Holland before June 28, 1940. 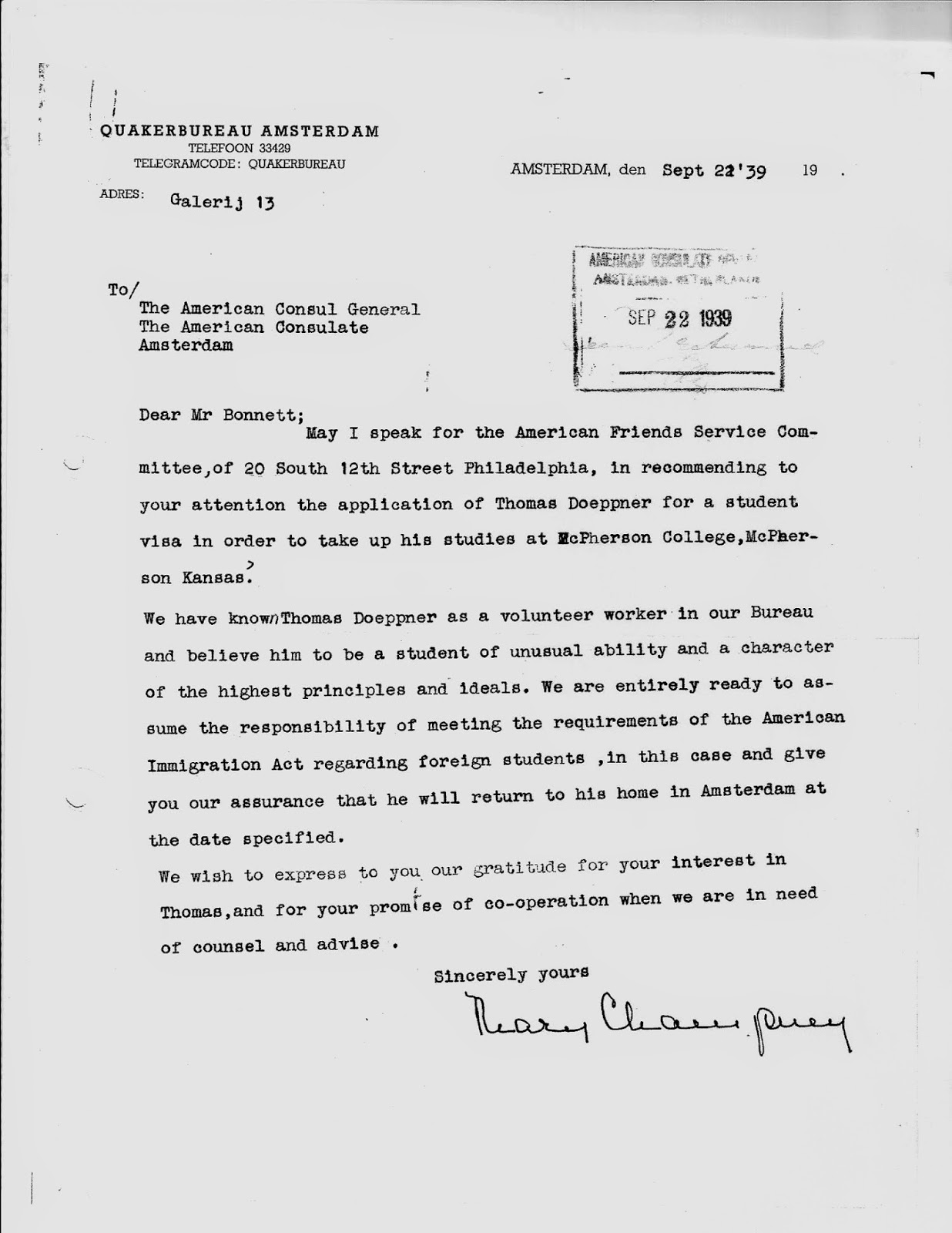 May I speak for the American Friends Service Committee, of 20 South 12th Street Philadelphia, in recommending to your attention the application of Thomas Doeppner for a student visa in order to take up his studies at McPherson College, McPherson Kansas.

We have known Thomas Doeppner as a volunteer worker in our Bureau and believe him to be a student of unusual ability and a character of the highest principles and ideals. We are entirely ready to assume the responsibility of meeting the requirements of the American Immigration Act regarding foreign students, in this case and give you your assurance that he will return to his home in Amsterdam at the date specified.

We wish to express to you our gratitude for your interest in Thomas, and for your promise of co-operation when we are in need of counsel and advice.

Once Opa sends out the SOS to Charlotte at the American Friends Service Committee (AFSC) everyone jumps in to help him out. All the letters written to the consul (or as a request for someone to write to the consul) are like a pile of peer pressure on the American Consul in Holland to just give the kid his visa already.

It reminds me of the odd parable Jesus told his disciples-

Luke 11: 5 And he said to them, ‘Suppose one of you has a friend, and you go to him at midnight and say to him, “Friend, lend me three loaves of bread; 6for a friend of mine has arrived, and I have nothing to set before him.” 7And he answers from within, “Do not bother me; the door has already been locked, and my children are with me in bed; I cannot get up and give you anything.” 8I tell you, even though he will not get up and give him anything because he is his friend, at least because of his persistence he will get up and give him whatever he needs.


Anyhow- Opa’s friends at the AFSC, United Press, and the Quakers of Amsterdam are playing the role of annoying neighbor by asking in many ways for the consulate to grant the visa for Opa. A few of the letters emphasize Opa’s plan to return to Amsterdam to live with his father after the school year. Which, as you may guess, is a big, fat, lie. I know Opa does not know what his future holds, but I'm pretty sure he planned on staying in the United States at least as long as possible/for his whole school career.

However, you might recall from earlier posts when I talk about the immigration laws- part of the difficulty for Jews and other refugees was that they had to be able to prove that they could return to their country of origin once the visa expired (for any visa that was temporary like the student visa). This was impossible for refugees out of Germany, as the case was clear that they could not return. So it became only possible for folks who somehow got beyond the German borders (like Opa) or who were in countries that had not yet been occupied or invaded by Germany. Those who know their WWII history know that that list of countries will change drastically in a short amount of time. Opa's additional little hiccup was that his legal status in Amsterdam was tentative. In order to be able to "return home" to Amsterdam, he would have to do it before his temporary resident status ran out in June of 1940. Again- if you know your WWII dates, you may remember that June of 1940 was a rough time for Europe. (I'll give you a hint- Germany invaded a lot of countries and took over with crazy scary speed.) But no one knows that, so right now all of these respectable people are lying for Opa (or out of forced ignorance) so he can obtain his student visa under these strict rules.


Right in this moment of time, although the war is on and the focus is on Americans returning, Opa is in the right place and time. He can still technically return to Amsterdam, and the war has not breached his borders… yet. Time is ticking.