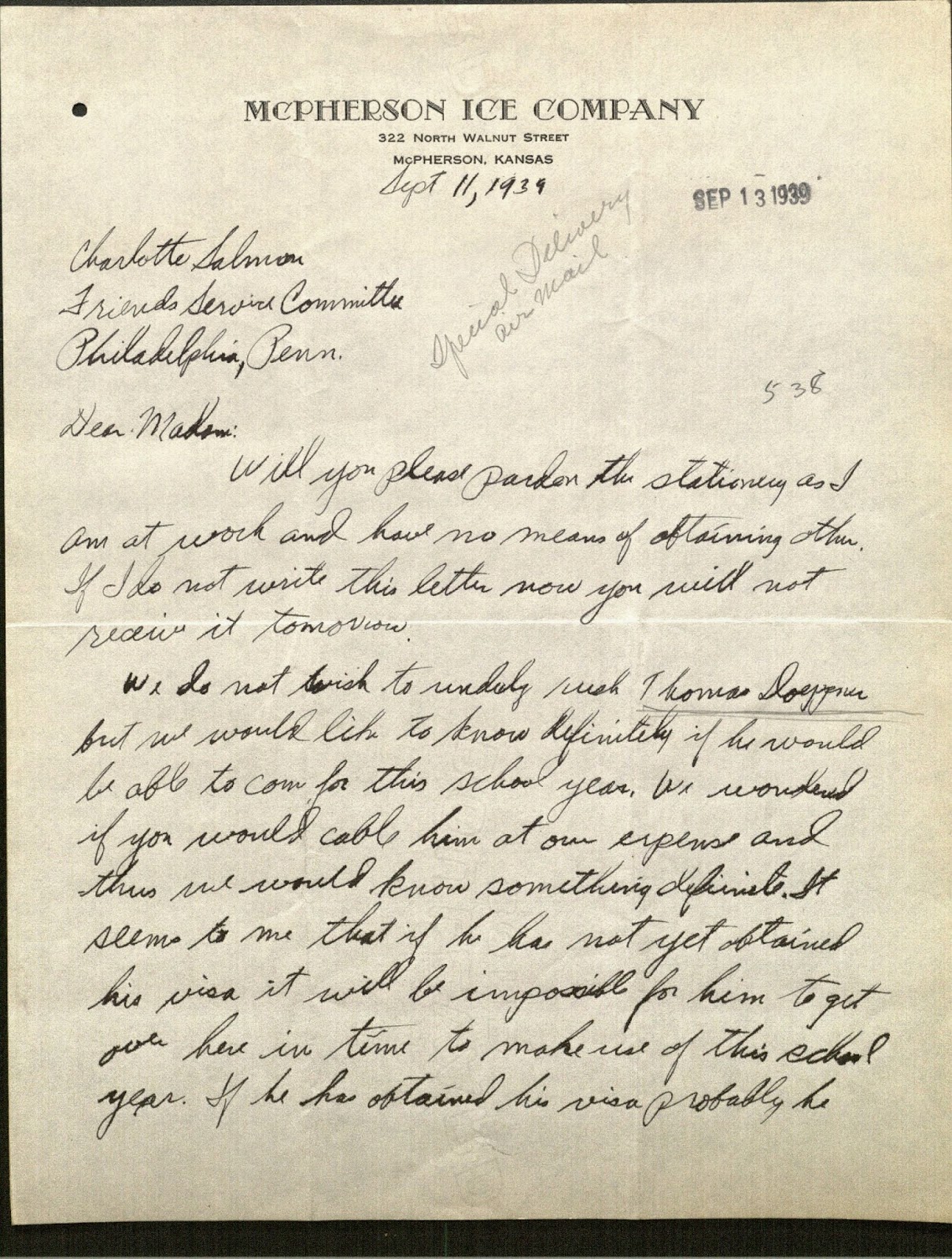 Will you please pardon the stationary as I am at work and have no means of attaining other. If I do not write this letter now you will not receive it tomorrow.

We do not wish to unduly rush Thomas Doeppner but we would like to know definitely if he would be able to come for this school year. We wondered if you would cable him at our expense and thus we would know something definite. It seems to me that if he has not yet obtained his visa it will be impossible for him to get over here in time to make use of this school year. If he has obtained his visa probably he -- 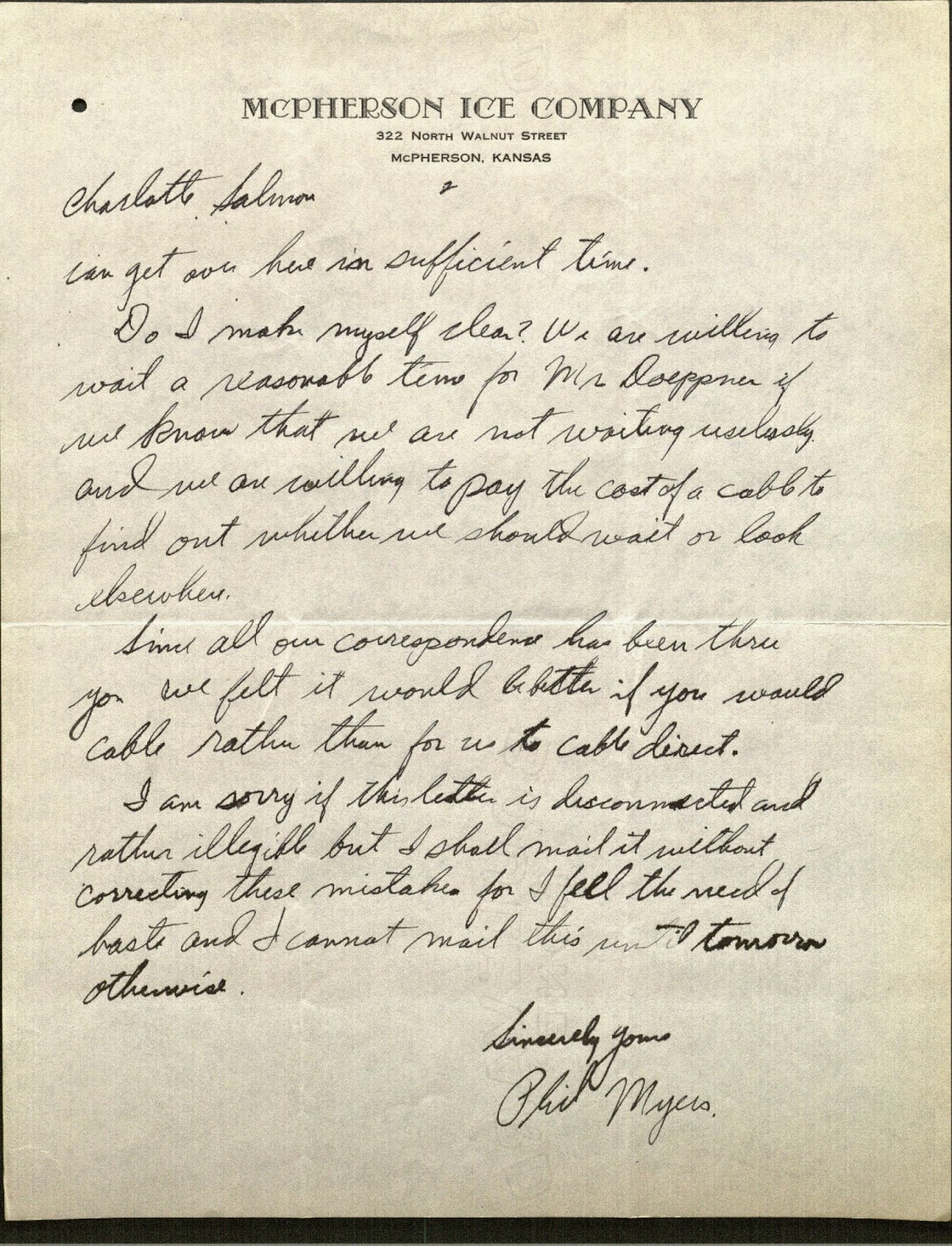 --can get over here in sufficient time.

Do I make myself clear? We are willing to wait a reasonable time for Mr. Doeppner if we know that we are not waiting uselessly and we are willing to pay the cost of a cable to find out whether we should wait or look elsewhere.

Since all our correspondence has been thru you we felt it would be better if you would cable rather than for us to cable direct.

I am sorry if this letter is disconnected and rather illegible but I shall mail it without correcting these mistakes for I feel the need of haste and I cannot mail this until tomorrow otherwise.

Charlotte receives this letter from Phil Myers written on September 11th, 1939, on his work stationary- the McPherson Ice Company (I love that!). Phil is writing with a sense of polite urgency- imploring that Charlotte confirm that Tom Doeppner is indeed planning on coming to McPherson. The moment that Opa received acceptance to McPherson, everything jumped into hyper-speed. The issue is that not everything/everyone responds as fast as wanted- so Phil Myers is checking in to make sure that Opa is going to be able to make it in time to fully make use of his opportunity at McPherson. Keep in mind that the acceptance and scholarship is really supposed to be for one school-year. Phil makes clear that they are “willing to wait a reasonable time” for Opa, but in light of the odds- he wants to make sure that if this case fell through for whatever reason, that someone else could be given a chance. 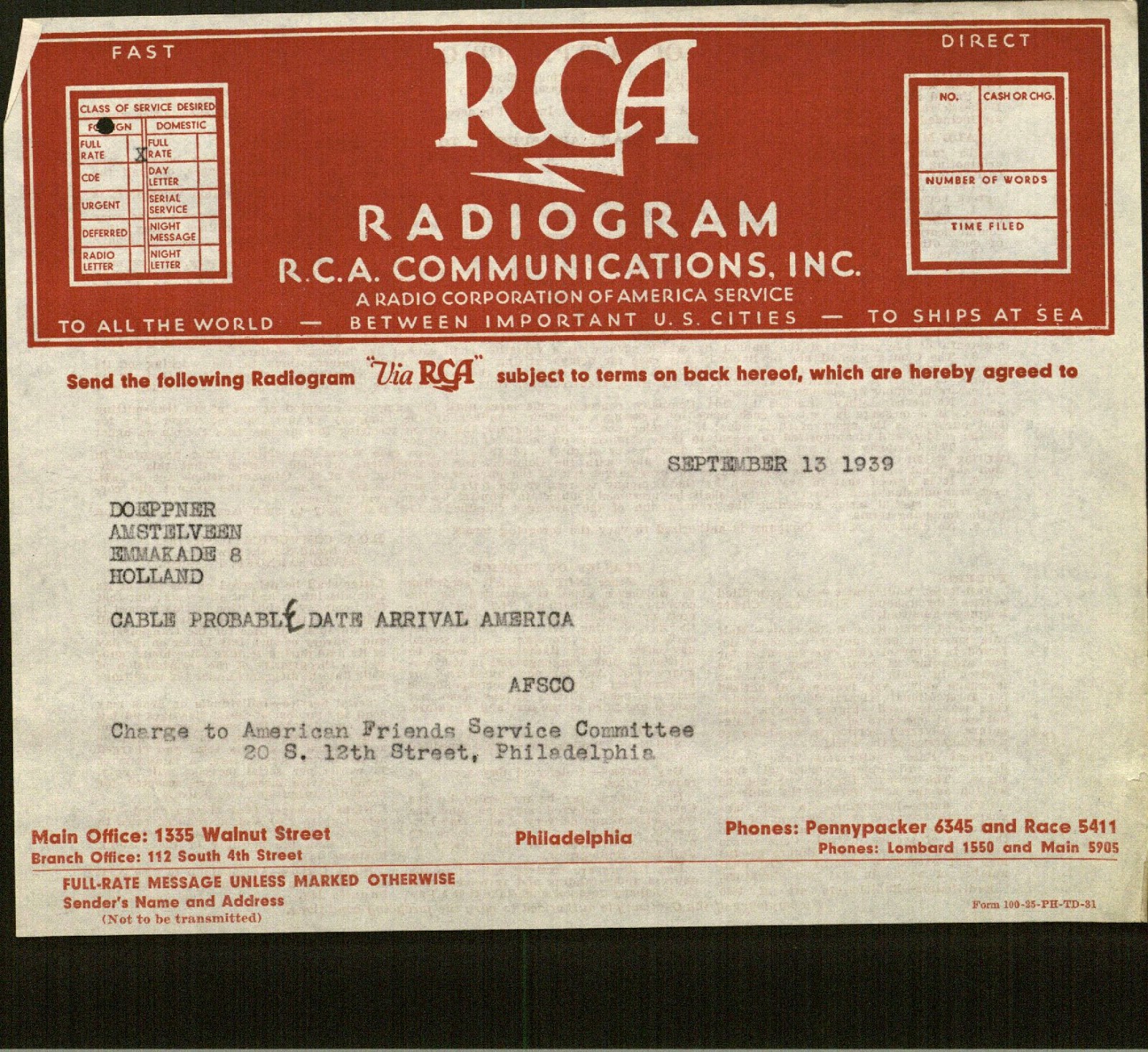 Telegram from Charlotte Salmon at AFSC to Opa in Holland

On September 13th, it appears that Charlotte Salmon cables Opa for his “probable date arrival America.” Despite Phil’s direction that they could cable at the school’s expense, the American Friends Service Committee (AFSC) foots the bill. 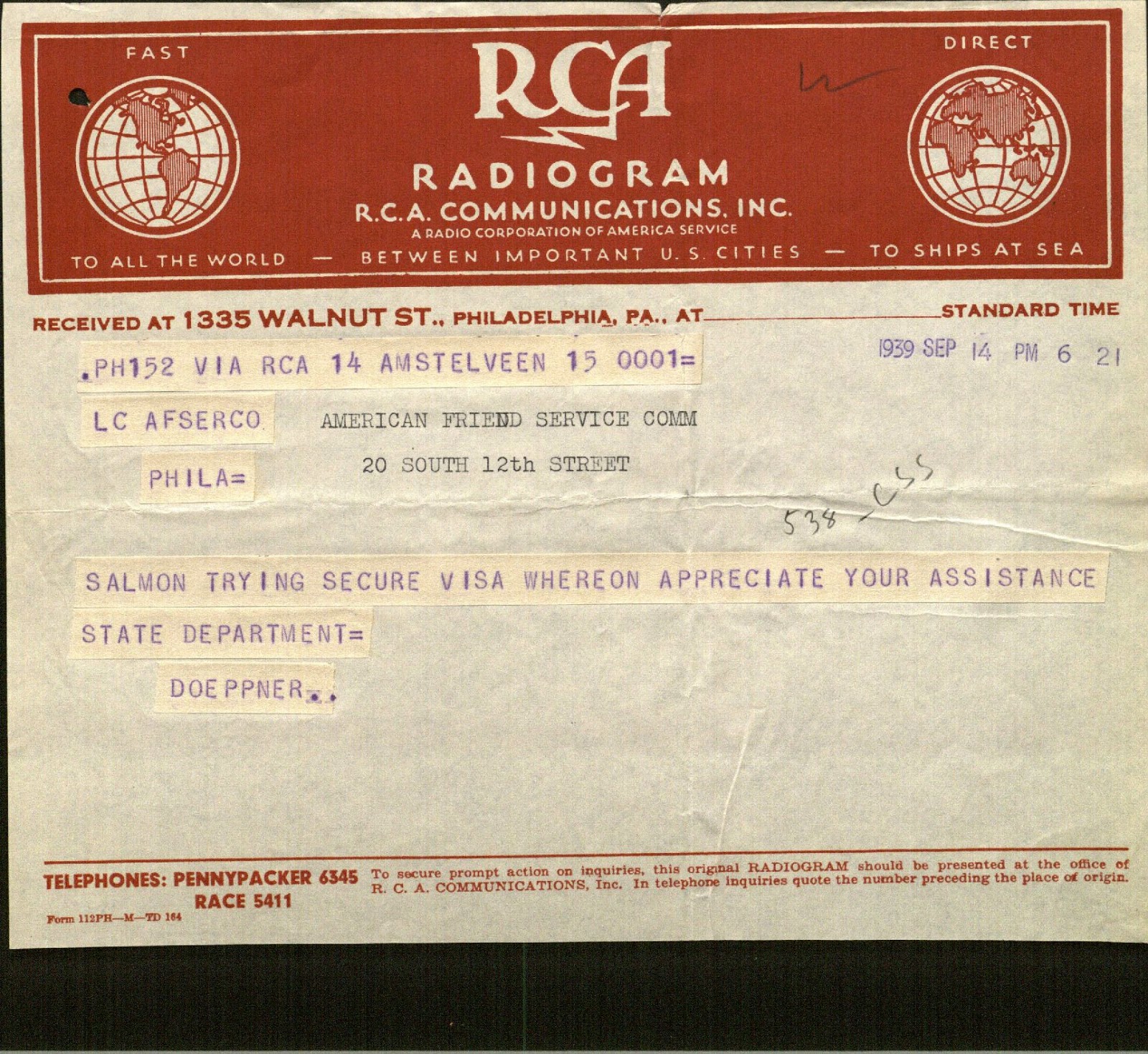 Telegram from Opa back to Charlotte Salmon at AFSC 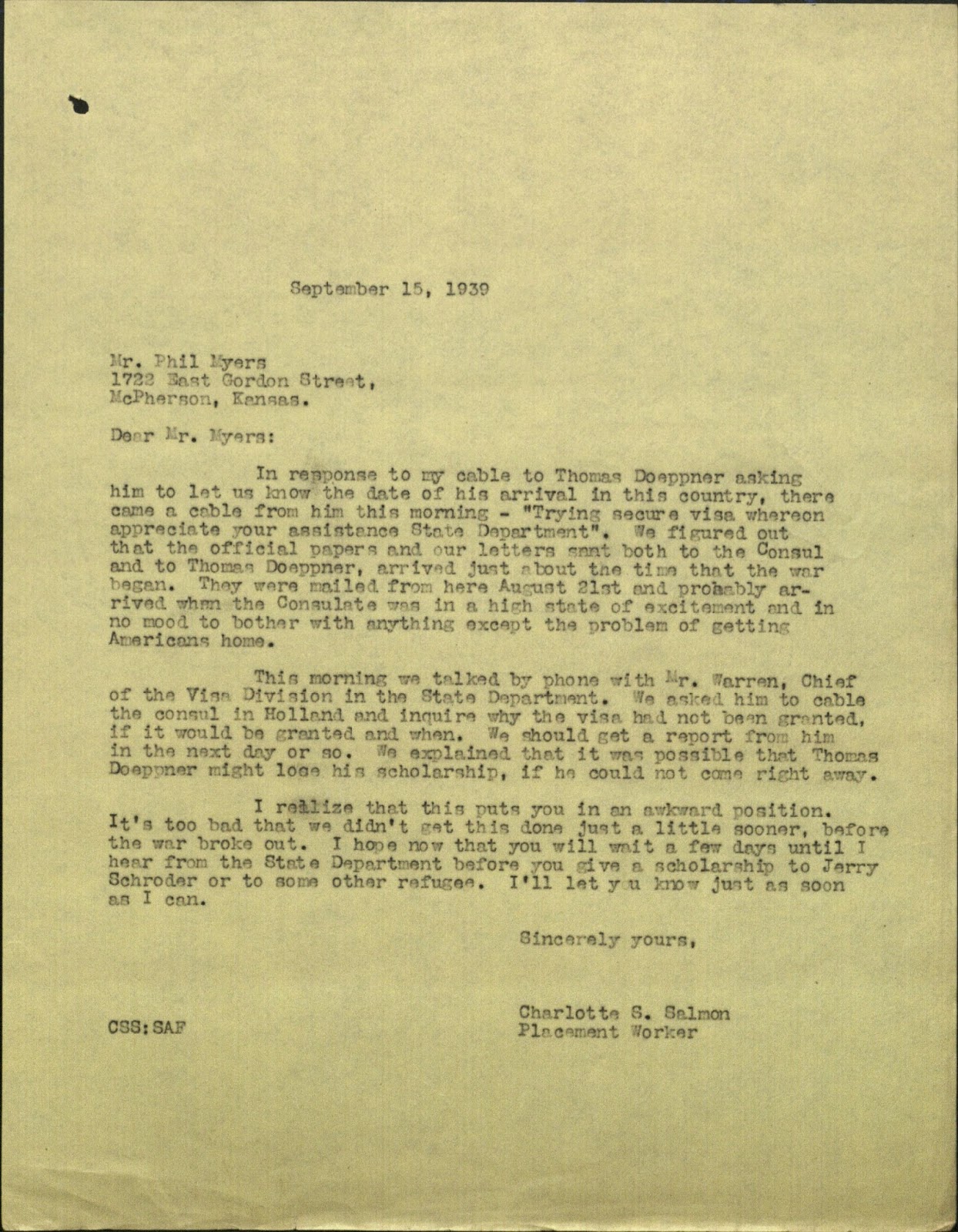 In response to my cable to Thomas Doeppner asking him to let us know the date of his arrival in this country, there came a cable from him this morning - "Trying secure visa whereon appreciate your assistance State Department". We figured out that the official papers and our letters sent both to the Consu and to Thomas Doeppner, arrived just about the time that the war began. They were mailed from here August 21st and probably arrived when the Consulate was in a high state of excitement and in no mood to bother with anything except the problem of getting Americans home.

This morning we talked by phone with Mr. Warren, Chief of the Visa Division in the State Department. We asked him to cable the consul in Holland and inquire why the visa had not been granted, if it would be granted ad when. We should get a report from him in the next day or so. We explained that it was possible that Thomas Doeppner might lose his scholarship, if he could not come right away.

I realize that this puts you in an awkward position. It's too bad that we didn't get this done just a little sooner, before the war broke out. I hope now that you will wait a few days until I hear from the State Department before you give a scholarship to Jerry Schroder or to some other refugee. I'll let you know just as soon as I can.

On September 14th, Charlotte gets a response from Opa: “trying to secure visa… appreciate your assistance- state department.”

That doesn’t sound good. Charlotte wrote to Phil on September 15th, explaining the situation. The timing of Opa’s big break may have been too late. The request for his visa flew into the consulate with the news of war and a host of other requests to get Americans out of Europe. The other news and requests caused Opa’s request to get lost in the shuffle. Charlotte called the right people and is now waiting and hoping that it does the trick. She asks for Phil Myers’ patience in waiting with them for a definitive answer.

I’m thinking about Opa, still living in Holland after nearly a year away from Germany. I wonder if Germany and his memories and friendships felt like a lifetime away. He’s been taking classes, meeting with the Quakers in Amsterdam, and working with his Dad- all while waiting and hoping to move to America. After all the waiting - he finally gets the green light- only to be told that it might not matter anymore- Europe is at war. He may once again have to wait for another chance, another miracle.

It reminds me that I don’t have a clue about real patience.
Posted by Sarah Snow at Saturday, December 06, 2014