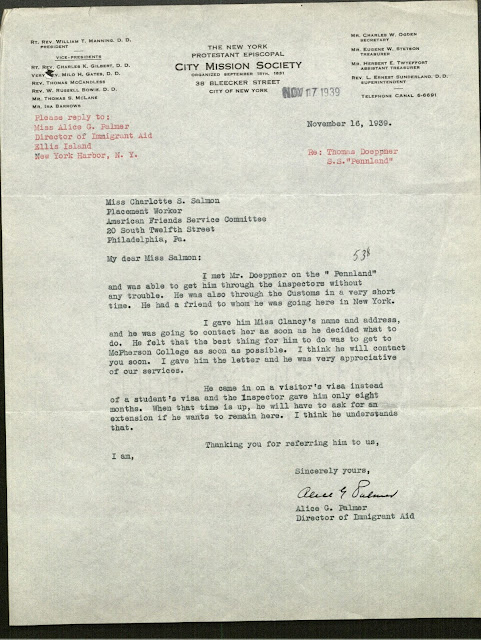 I met Mr. Doeppner on the "Pennland" and was able to get him through the inspectors without any trouble. He was also through the Customs in a very short time. He had a friend to whom he was going here in New York.

I gave him Miss Clancy's name and address, and he was going to contact her as soon as he decided what to do. He felt that the best thing for him to do was to get to McPherson College as soon as possible. I think he will contact you soon. I gave him the letter and he was very appreciative of our services.

He came in on a visitor's visa instead of a student's visa and the Inspector gave him only eight months. When that time is up, he will have to ask for an extension if he wants to remain here. I think he understands that.

Thanking you for referring him to us,
I am,
Sincerely yours, 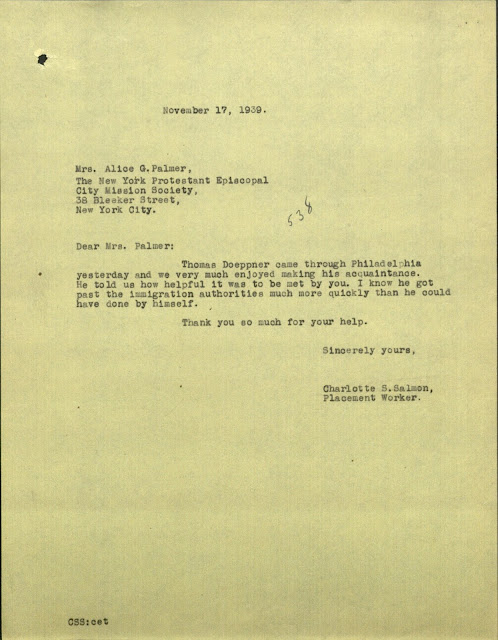 Thomas Doeppner came through Philadelphia yesterday and we very much enjoyed making his acquaintance. He told us how helpful it was to be met by you. I know he got past the immigration authorities much more quickly than he could have done by himself.

Thank you so much for your help. 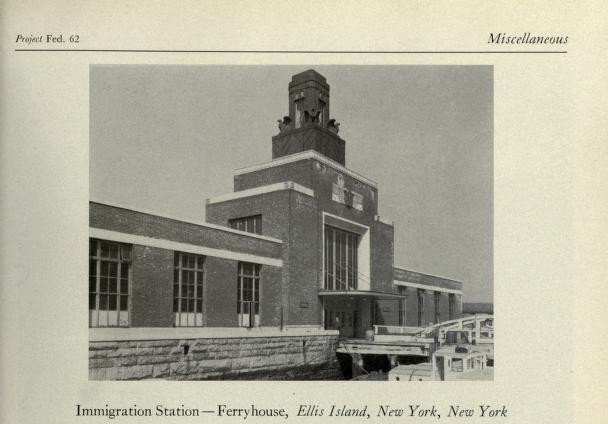 Opa has arrived! Finally news of Opa’s safe arrival- and a little insight into his entry on Ellis Island. His autobiography alludes to Ellis Island negatively:

I must add here that my reception at Ellis Island was, to say the least, unfriendly. I was given a visitor’s permit (instead of a student visa), but because two months had already passed, they cut it down from nine months to only seven months… When I finally got out of Ellis Island, there were a Quaker lady as well as a former school friend waiting for me. The Quaker lady suggested that I go first to Philadelphia, to the Quakers’ “American Friends Services Committee” Headquarters and asked me if I had enough money for the bus ride. I assured her that I did, and she told me which bus to take. I spent the night with my friend and left the next day for Philadelphia.

It’s funny how our memory of past events can be shaped by perspective, or I guess even current events-  for Opa, his experience at Ellis Island was a negative one, but for Alice Palmer, it was less trouble than she expected. Opa also didn’t remember that Alice Palmer was with him and guiding him on Ellis Island, not outside it.

We have no idea who Opa’s friend is, but it makes me happy that Opa’s first night in America was spent with a familiar face who spoke a familiar language. After a couple weeks on a boat with mostly Americans, it was probably nice to have a little reminder of home, and maybe some helpful hints from a German who has some experience in America.

Alice Palmer was so kind to provide a helping hand to Opa and walk him quickly through the process at Ellis Island. I can’t imagine how chaotic and frightening that must have been for people coming for the first time to America. What a gift that mission was to bring peace to the chaos awaiting immigrants. We did a spotlight on this ministry if you missed it, please check it out here.

We see that Opa’s hard-earned student visa has been thrown out the window for a visitor’s permit, which is confusing, frustrating, and ironic considering the pains that were taken to get that coveted Student Visa. Also, I thought it was easier to obtain a student visa- but maybe not. Alice alluded that Opa understood this switch-up, but there was some doubt of his full comprehension.

Charlotte Salmon was grateful to Alice, and shared that she got to meet Opa. I’m so glad Opa met her!! I wonder if he knew just how instrumental Charlotte was in his successful entry to the United States. I know Opa's original plan on the earlier boat, Charlotte was not going to be able to meet him, but this one worked out where she could.

I'm trying to imagine how Charlotte felt. What a victory! Can you imagine meeting the person you worked for months to gain passage into the United States- healthy, smiling, standing right in front of you on American soil? I don’t know- I feel like I would just be so overwhelmed by the tangible proof of my hard work. It’s one thing to see it all in letters, but to meet the individual… that had to have been such a morale boost for the whole AFSC office.

So now Opa is on American soil. He speaks a little English, has just enough cash to get himself safely to Kansas, and other than his friend's familiar face for his first night- he has no idea what awaits him in the near future. His freedom is still tenuous, a temporary pass of eight months to get him a foothold in America. School has been in session for over two months and Opa is eager to get to McPherson soon.

I think at this point I would be in "go" mode. There is no turning back now. Just keep stepping towards the future and roll with it.
Posted by Sarah Snow at Saturday, June 27, 2015