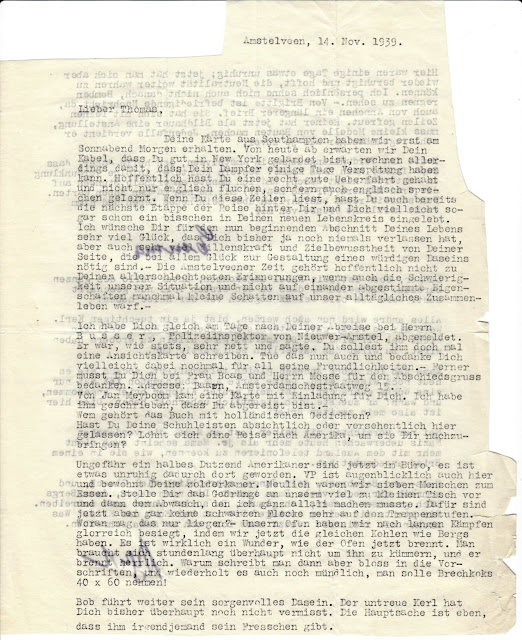 We did not get your card from Southampton til Saturday morning. Now we are waiting for your telegram that you arrived well in New York but also consider that your Steamer might be late by a few days.

Hopefully you had a good trip and learned not only to curse but speak in English. When you are reading these lines the next stage of your journey will be behind you, and perhaps you are getting used to your new area of living.

I wish you for this, now beginning part of your life, good luck, which has never failed you before, but also willpower, goal understanding from your side for even with all the luck are needed to create a dignified existence.

Hopefully the Amstelveen time does not belong to your worst memories since the complications of our situation and perhaps different personalities sometimes would cast small shadows on our daily life together.

One day after you left I went to Mr. Busser the police inspector of Nieuwer-Amstel to report that you had left. As usual he was very nice and asked that you should send him a picture postcard. Do that and thank him again for all his friendliness. Also you have to thank Mrs. Boas and Mr. Mosse for their going-away-greetings. Address: Baarn, Amsterdamschestraatweg 15.

From Jan Meyboom came an invitation for you.  I wrote to him that you had already left.
Who does the book of Dutch poetry belong to?
Did you purposely leave your shoetrees behind? Would a trip to America be worth it to bring them to you?

Approximately half a dozen Americans are now in the office, so it has become somewhat busy. VP is here now also and stays in your Zolderkammer. (attic room)

The other day we were a total of 7 people for dinner. Imagine the crowd at our much too small table, and then the dishwashing, which I had to do all by myself.

But at least now there are no black spots on the stairs! Wonder why that is?

Finally after long fights we gloriously defeated our stove (furnace) since now we have the same coal as Bergs.(that must be a family name for friends)

It is really a miracle how the stove now burns. For many hours one does not have to tend to it, it burns great. So why do they write in the instructions and repeat it orally again to use Brechkoks 40x60? (you can google Brechkoks, it is used for central heating)

Bob continues his worry laden life. (Bob is their dog) As of now that unfaithful fellow has not missed you. The important thing for him is that somebody feeds him.

A few days here were somewhat uneasy, but now one has calmed down again and hopes to remain neutral. Personally I do not yearn to see bombs raining down.

We had a satisfying note from Brigitte (Opa's sister) and also a long letter from Annchen (August's sister). She was happy about your lines. (letter)

Heiner (not sure who this is- maybe August's brother?) now has employment as a sculptor he makes small models of buildings. In any case he earns more and regularly than ever before.

Today is Blackout Drill in Amstelveen, so I hope that Papa comes home earlier. Yesterday, because of the blackout, he could not come through, and I had to wait 1 and ½ hours with my warm dinner for the three men. (VP and Beatty).
Now write in detail about your new life, and many heartfelt greetings from me.
Emma
Long one, (used for somebody very tall!)
Just now your cable arrived with lots of hullabaloo from the whole office. Thank God that you have finished the first part of the trip. Am I going to receive the log of your trip soon?
Everything will work out you are a clever guy.

Giving you a lot of advice is because we are not with you, and that you will have to conquer America all by yourself. Which of course you will do immediately!!

Through Annchen I sent a wire to Mama so she will be informed today already. Your card from Southampton took only one week. Did my first airmail letter arrive and when? I  should have overtaken you.

So this is my second letter. Be careful with your mail to Mama, the damned Nazis control everything more than before. Mama does not seem to be able to telephone to foreign countries, as she indicated in one of her letters.

Break-a leg my boy, lots of luck, and write to me often. Emma says the Bergs are sending greetings, I think you should write to them also.
What’s up with my cottage? (a previous letter hinted about getting a cottage in the US, so it is a little tease)
How is your weather there? What are the Indians doing?
Now I have to also write to Mama.
August

August and Emma (Opa’s father and stepmother) write, finding out in the middle of their writing, that Opa has arrived safely to America. Emma writes the first bit, full of advice, and an interesting allusion to some personality conflicts between her and Opa. I really wish I knew better what the relationship was between Opa and his stepmother. She obviously cared for Opa, but there is formality in her writing, hesitance in her words. She calls him Thomas. Helene, Opa's niece, told me of the tension between Opa and Emma. She said that they were civil, but that Opa harbored some resentment towards Emma and that she wasn't incredibly mothering towards him. I think this kind of shows in her letter.

Emma indicating that they may have had some bomb scares is telling that the climate is changing in Holland. She seems afraid, but still distant from the threat.

August writes a shorter bit, teasing him throughout. (With jokes like asking how the Indians are doing in America.) August starts with “Long Tom”- his little pet-name for Opa. Opa was a tall man, I wonder if he towered over his family! August gives him the business of thank you’s and details of correspondence. I do appreciate that he keeps Ella well-informed and seems to respect her. Annchen is August’s sister in Berlin, a non-Jewish connection to Ella, and someone who seems to have better communication abilities under Nazi control. I love that August says “damned Nazi’s.” It sort of encapsulates him for me. A newspaper man, annoyed with the Nazi’s for their tightening control.

There is something I noticed with August’s letters that I haven’t mentioned before. He signs them “August.” Not Dad, Papa, Father, etc. I wonder why? Did Opa call him August? I am getting more and more signs that Opa’s relationship with August was one hinged on respect, but not closeness. They have a sort of jovial, intellectual banter going between the two of them.

I can’t help but wonder at the way our relationships affect the generations below us. Growing up, my Dad hardly ever talked about his work. We knew that he was a helicopter test pilot, but he hardly ever went into detail, except that one time when he brought home the video of the “hard landing” (read: crash). I remember being more intentional about asking him about his day at work as I got older, assuming his reticence was more about getting two words in with three daughters and a wife. One day when I asked him why he didn’t talk about work much, he told me that he remembers his Dad (Opa) sitting at the dinner table, telling his family all about his work. My Dad said he was bored out of his mind and made an effort not to do the same to his family. But maybe, maybe Opa was trying to cancel out his father’s legacy: absence. Maybe Opa was trying to share his life, but only knew how to share his occupation (perhaps inherited from August). And so my Dad went the opposite way, choosing not to bore his daughters. Of course, Dad is a test pilot- so I feel like some of his stories could have been pretty interesting. As we have grown older, he has shared more of his work with us and I feel more connected to that part of his life. Over a Christmas break Jason and I got to attend a New Year’s Eve party hosted by a work friend of my Dad’s and it was great to see the people my Dad interacted with every day. I got to see my Dad in his work element, how people respected him but also enjoyed his company. The people were nice and friendly. It was weirdly wonderful to experience that my Dad works with nice and friendly people.

This is my tangent - but it makes me think. What relationship quirks do we have within our family that affect how we interact with the rest of our family? Could we trace some of our behavior patterns back a few generations? What are some things we assumed was best, but is only a reaction to what we didn’t like in our past? Did August have a strained relationship with his father and think his connection to Opa was a step up? Was his father too serious, therefore encouraging August to interact with Opa with humor? Or maybe he didn’t think about it at all. Do any of you have any experiences like this? Generational ping-pong of relational reactions? Say that five times fast. Think about what relationship quirk you’ve inherited or passed down, and tell me about it in the comments.
Posted by Sarah Snow at Thursday, June 18, 2015