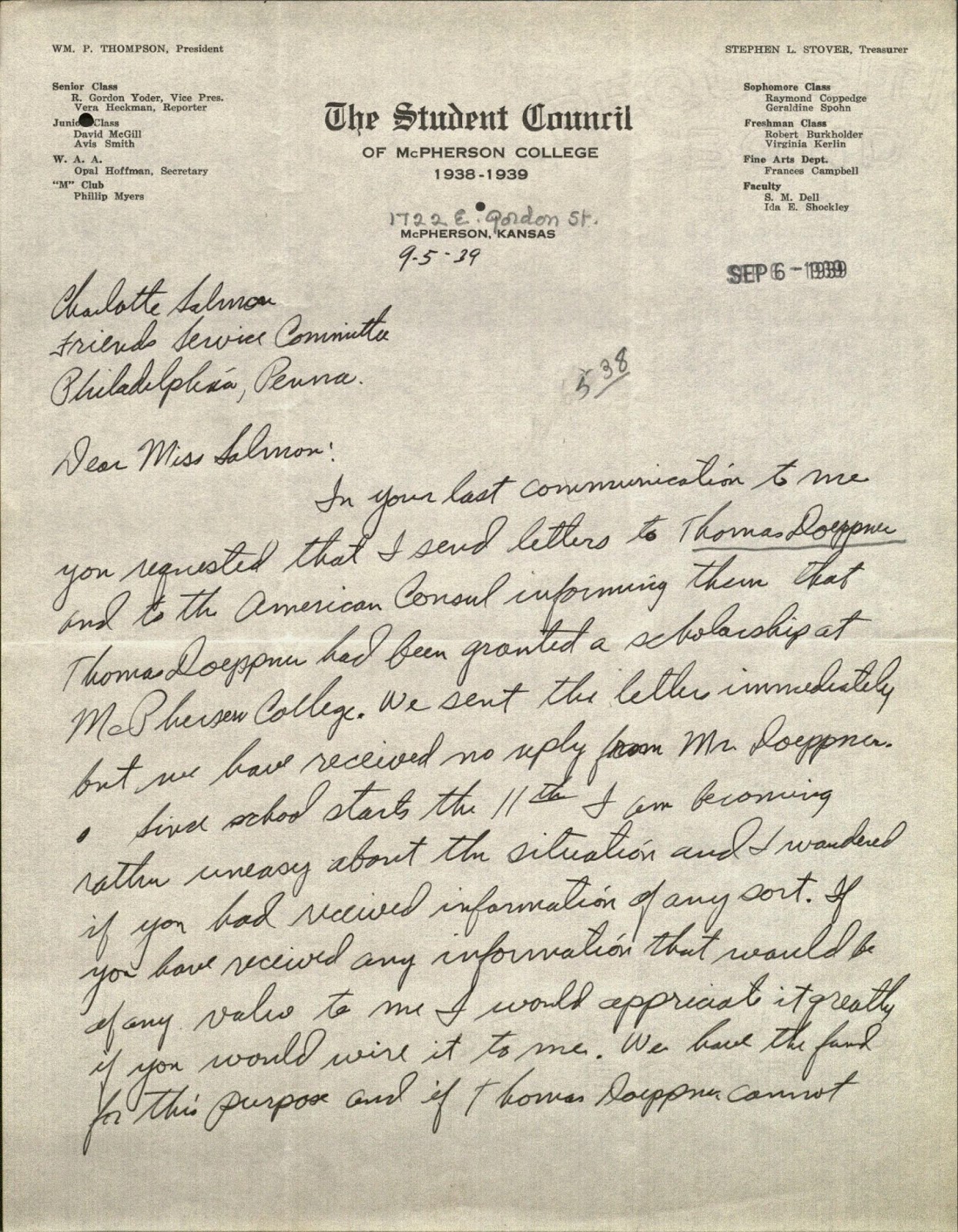 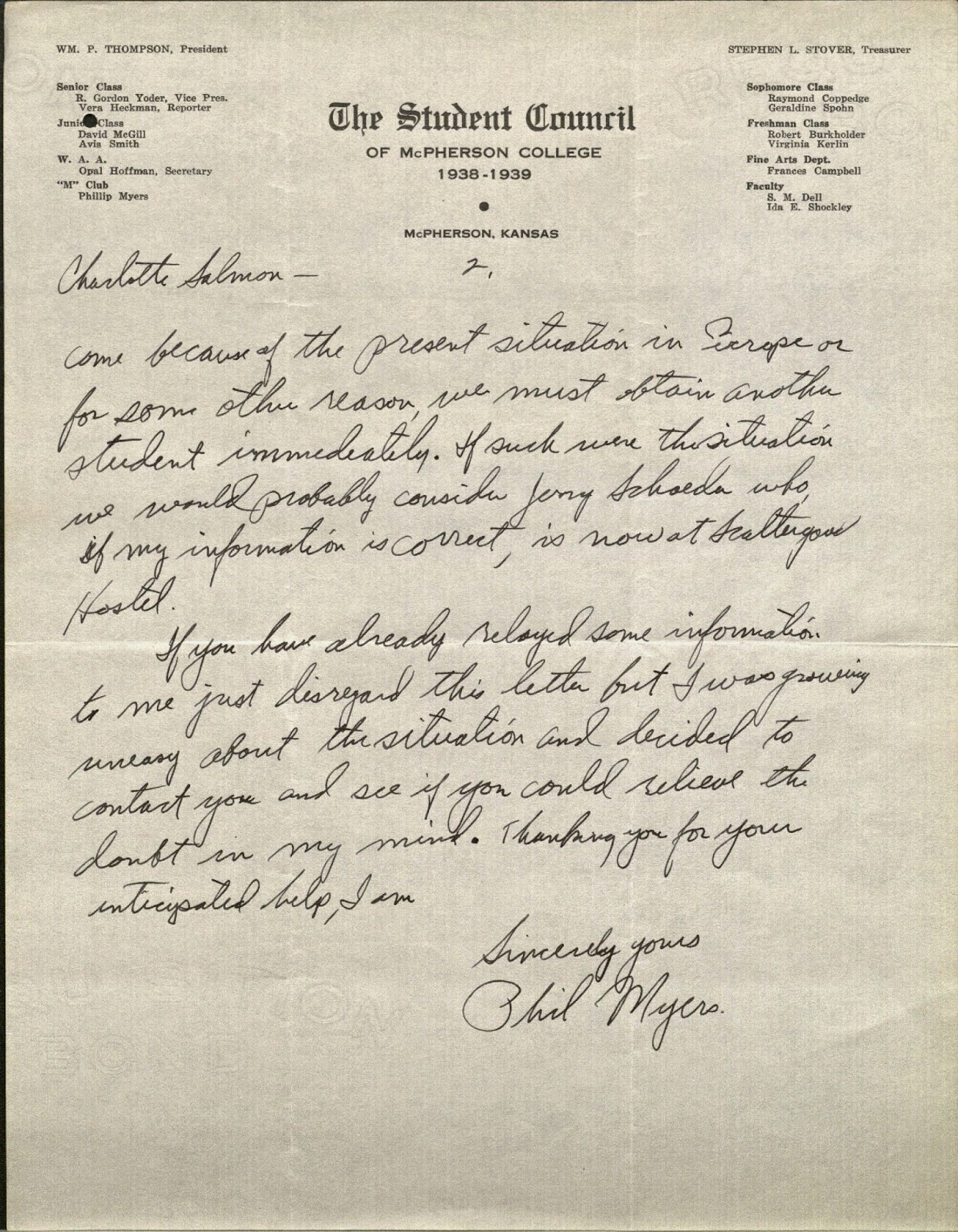 In your last communication to me you requested that I send letters to Thomas Doeppner and to the American Consul informing them that Thomas Doeppner had been granted a scholarship at McPherson College. We sent the letters immediately but we have received no reply from Mr. Doeppner.

Since school starts the 11th I am becoming rather uneasy about the situation and I wondered if you had received information of any sort. If you have received any information that would be of any value to me I would appreciate it greatly if you would wire it to me. We have the fund for this purpose and if Thomas Doeppner cannot
(Charlotte Salmon - pg 2)
come because of the present situation in Europe or for some other reason, we must obtain another student immediately. If such were the situation we would probably consider Jerry Schroeder who if my information is correct, is now at the Scattergood Hostel.

If you have already relayed some information to me just disregard this letter but I was growing uneasy about the situation and decided to contact you and see if you could relieve the doubt in my mind. Thank you for your anticipated help, I am
Sincerely yours,
Phil Myers 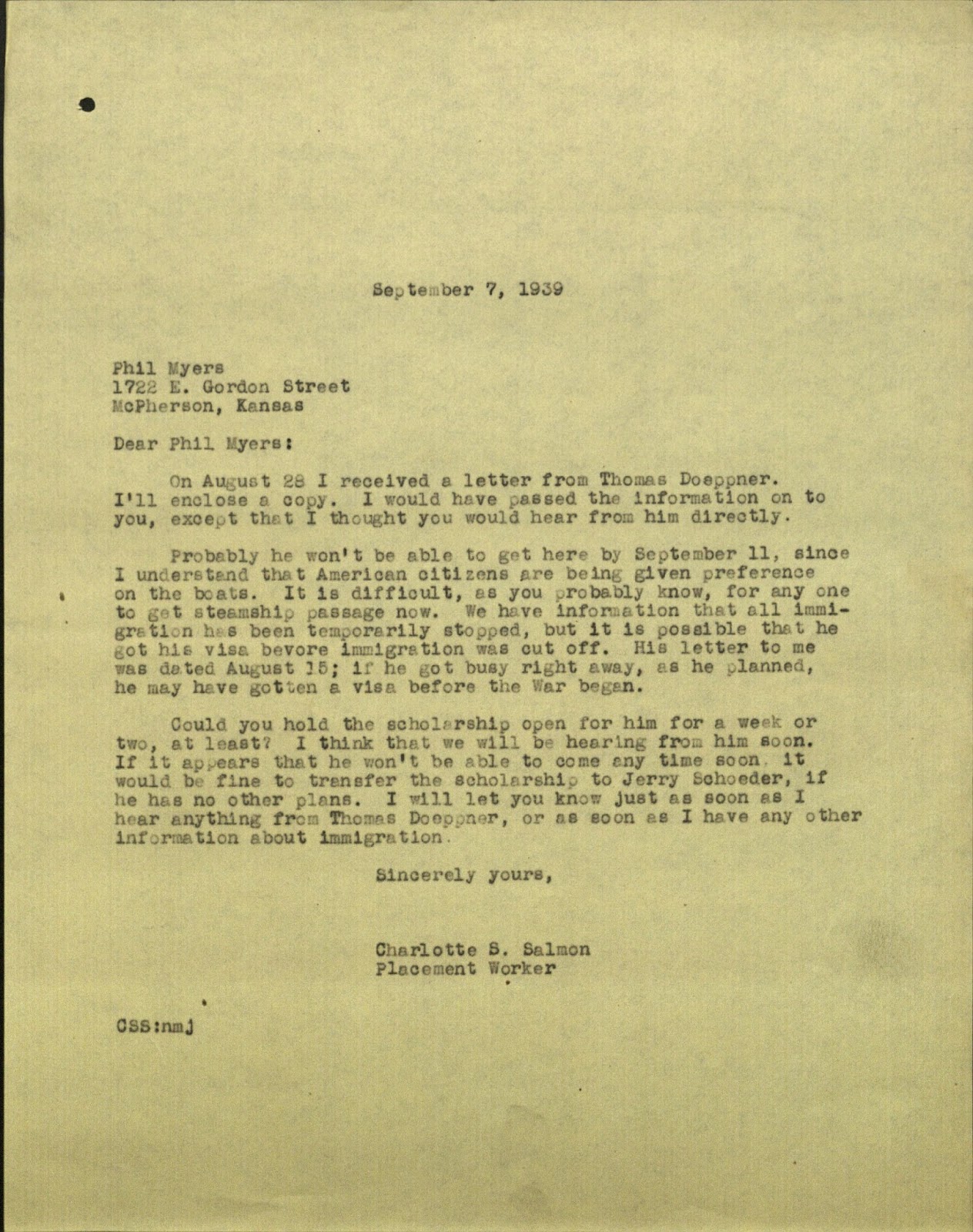 On August 28 I received a letter from Thomas Doeppner. I'll enclose a copy. I would have passed the information on to you, except that I thought you would hear from him directly.

Probably he won't be able to get here by September 11, since I understand that American citizens are being given preference on the boats. It is difficult, as you probably know, for any one to get steamship passage now. We have information that all immigration has bee temporarily stopped, but it is possible that he got his visa before immigration was cut off. His letter to me was dated August 15; if he got busy right away, as he planned, he may have gotten a visa before the War began.

Could you hold the scholarship open for him for a week or two, at least? I think that we will be hearing from him soon. If it appears that he won't be able to come any time soon it would be fine to transfer the scholarship to Jerry Schoeder, if he has no other plans. I will let you know just as soon as I hear anything from Thomas Doeppner, or as soon as I have any other information about immigration.

Phil Myers of McPherson College wrote to Charlotte Salmon of American Friends Service Committee (AFSC) to ask simply: is he coming or what? Phil Myers hasn’t heard anything from Opa since the school sent the formal invitation for Opa to join them in the fall. Opa sent his one-word “ACCEPTED” telegram after he heard of their offer through the AFSC. But McPherson has yet to hear directly from him. Phil Myers appropriately wonders if he is not able to come or has had difficulties with the visa process. If Opa cannot attend, there is a runner up, Jerry Schroeder, who is currently living in Scattergood Hostel- a place in Iowa the AFSC organized for refugees to live.

Charlotte drummed up a response quickly with some encouraging facts that will hopefully keep Opa’s scholarship and admittance in tact. She says she heard from Opa on August 28th. In the letter, it seems he alluded that he would get right on the ball and get his visa. She seemed confident he would be able to get it.

So that was the good news. The bad news was: War has begun. Germany invaded Poland on September 1st which catapulted a response from the world. Britain declared war on Germany as of September 3rd. A British cruise ship was sunk by a German U-boat in the Atlantic on September 3rd. People are ready to get home if home is away from Europe. Passenger ships are sold-out. American citizens are given preference on the boats, especially since the war has officially begun. So that meant Opa had to get in another line: the line for a ticket on a ship. I hadn’t even considered that would be an issue. But of course, with war a reality rather than a rumor, the Americans would be scrambling to head home and get out of dodge.

Then the news gets worse: “all immigration has been temporarily stopped.” What? What just happened? She is hopeful that Opa got his visa approved before this development, but this is bad. The declaration of war triggered a pause on all visa processing, so that concerned nations could revisit their policies and likely make them harder for certain folks to immigrate.  For many people, this could mean their visa was just a day away, but null and void.

Charlotte manages to make things hopeful and requests that Phil keeps the scholarship open for just a little longer before transferring it to Jerry Schroeder. I know this must have been challenging for Charlotte, as Jerry may very well have needed that offer. But has far as she knew, Opa may have gotten the visa in time. If we think in triage terms- Opa is still in Europe- he needs this more- and it may very well be his last chance at getting out of Europe.

So, what’s Opa doing? Is he coming or what? Did he get the visa in time? Can he find a ship with a spot for him?
Posted by Sarah Snow at Sunday, October 12, 2014