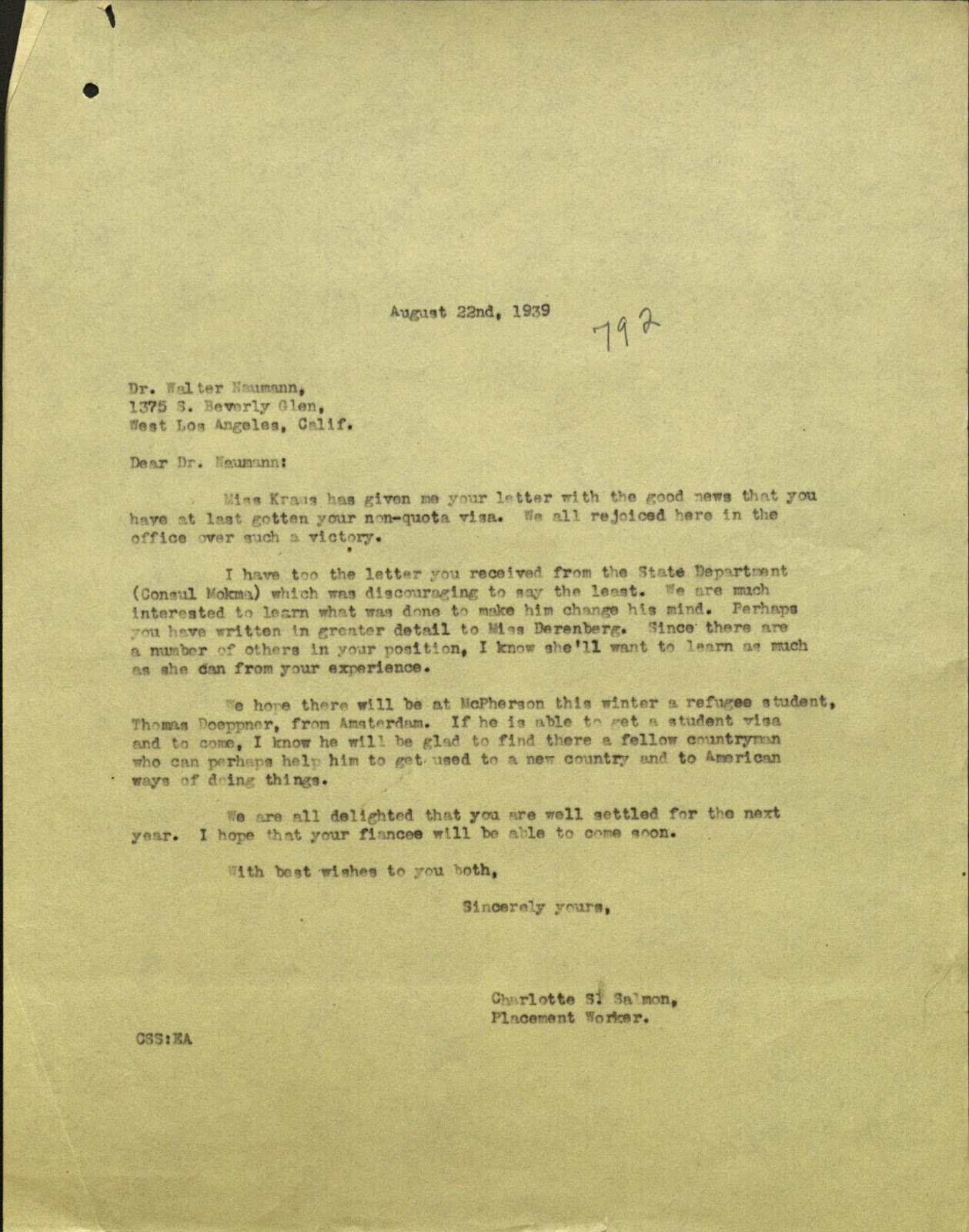 Miss Kraus has given me your letter with the good news that you have at last gotten your non-quota visa. We all rejoiced here in the office over such a victory.

I have too the letter you received from the State Department (Consul Mokma) which was discouraging to say the least. We are much interested to learn what was done to make him change his mind. Perhaps you have written in greater detail to Miss Derenberg. Since there are a number of others in your position, I know she'll want to learn as much as she can from your experience.

We hope there will be at McPherson this winter a refugee student Thomas Doeppner, from Amsterdam. If he is able to get a student visa and to come, I know he will be glad to find there a fellow countryman who can perhaps help him to get used to a new country and to American ways of doing things.

We are all delighted that you are well settled for the next year. I hope that your fiancee will be able to come soon.

With best wishes to you both,
Sincerely yours,
Charlotte S. Salmon,
Placement Worker. 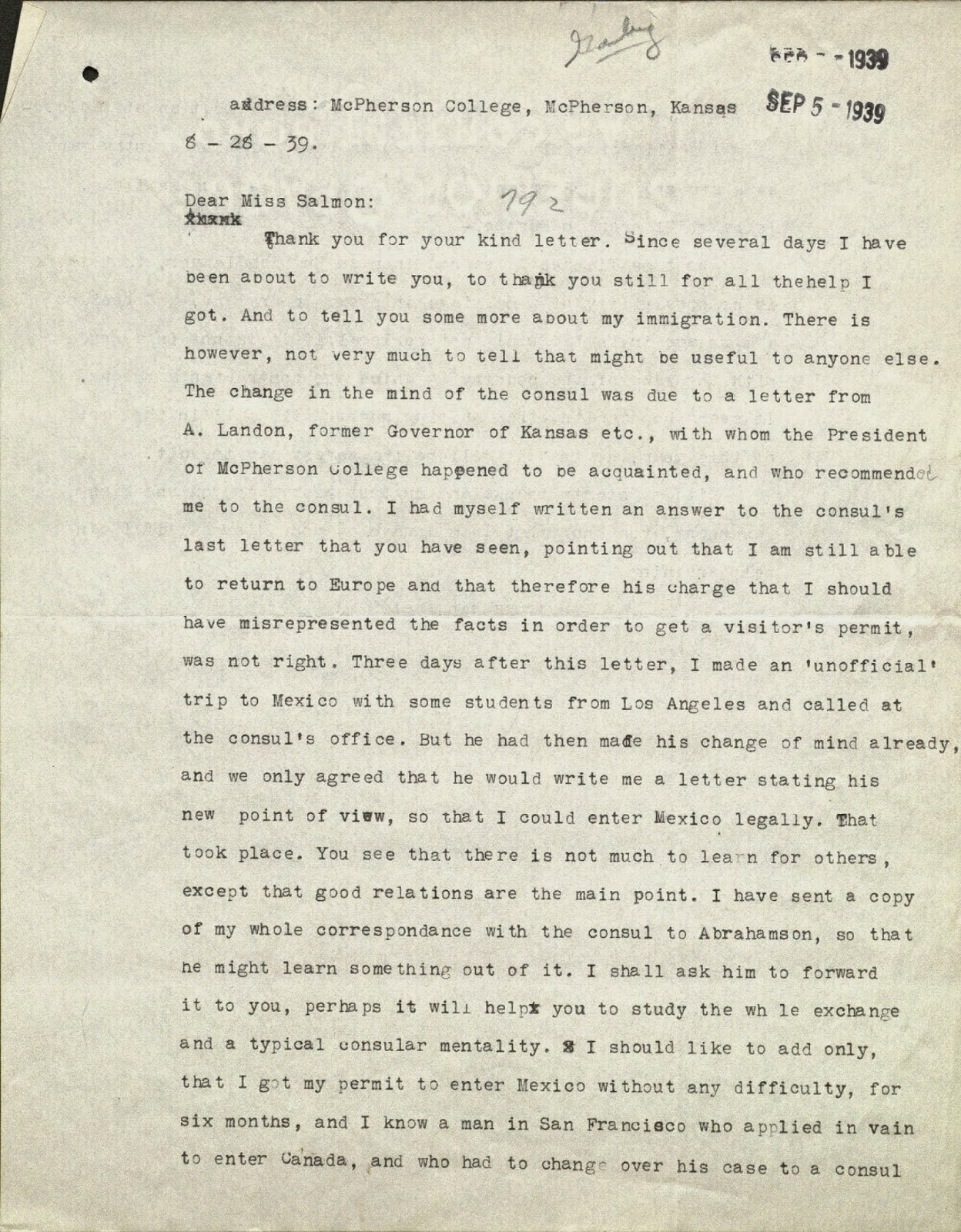 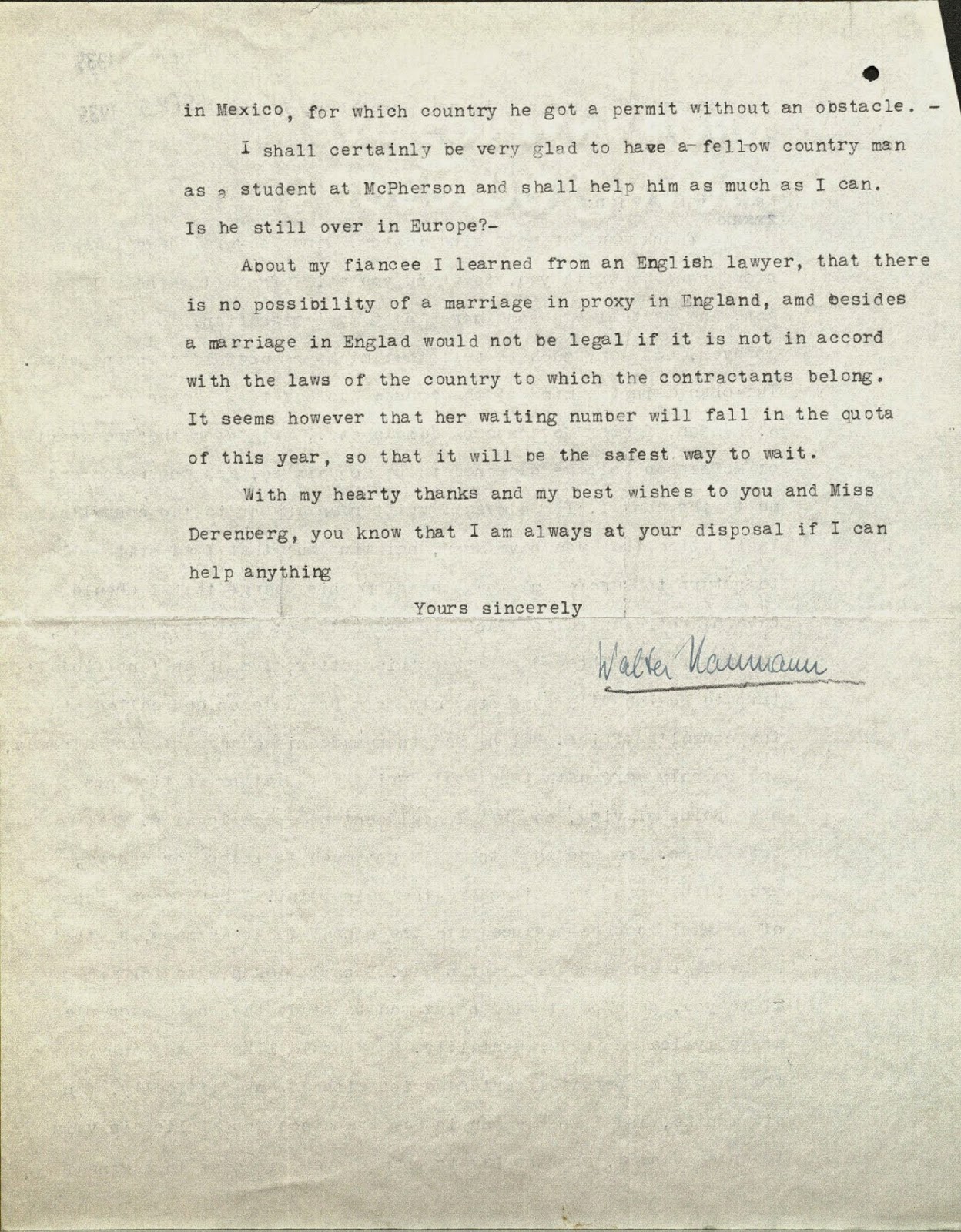 Thank you for your kind letter. Since several days I have been about to write you, to thank you still for all the help I got. And to tell you some more about my immigration. There is however, not very much to tell that might be useful to anyone else. The change in the mind of the consul was due to a letter from A. Landon, former Governor of Kansas etc., with whom the President of McPherson College happened to be acquainted, and who recommended me to the consul. I had myself written an answer to the consul's last letter that you have seen, pointing out that I am still able to return to Europe and that therefore his charge that I should have misrepresented the facts in order to get a visitor's permit, was not right. Three days after this letter, I made an 'unofficial' trip to Mexico with some students from Los Angeles and called at the consul's office. But he had then made his change of mind already, and we we only agreed that he would write me a letter stating his new point of view, so that I could enter Mexico legally. That took place. You see that there is not much to learn for others, except that good relations are the main point. I have sent a copy of my whole correspondence with the consul to Abrahamson, so that he might learn something out of it. I shall ask him to forward it to you, perhaps it will help you to study the whole exchange and a typical consular mentality. I should like to add only, that I got my permit to enter Mexico without any difficulty, for six months, and I know a man in San Francisco who applied in vain to enter Canada, and who had to change over his case to a consul in Mexico, for which country he got a permit without a obstacle.

I shall certainly be very glad to have a fellow country man as a student at McPherson and shall help him as much as I can. Is he still over in Europe?

About my fiance I learned from an English lawyer, that there is no possibility of a marriage in proxy in England, and besides a marriage in England would not be legal if it is not in accord with the laws of the country to which the contractants belong. It seems however that her waiting number will fall in the quota of this year, so that it will be the safest way to wait.

With my hearty thanks and my best wishes to you and Miss Derenberg, you know that I am always at your disposal if I can help anything.

This correspondence back and forth between Dr. Naumann and Charlotte Salmon gives us another clue to the scope of Charlotte’s work. Her role in the American Friends Service Committee (AFSC) was not limited to placing refugee students in colleges. In these letters, she touches base with a refugee who has finally obtained his non-quota visa and is able to begin teaching at McPherson College. If you have been following along in this blog, you might already know about the differences in the types of visas. The short version is: a non-quota visa is a visa you don’t have to wait in line for. They are harder to obtain, but if you qualify- you are more likely to get one on time.

If you read between the lines, you can see that Dr. Naumann has entered the United States on a visitors visa and was in danger of being deported back to Germany. The consul was upset with Dr. Naumann, accusing him of being dishonest about his ability to return to his country (a major factor in obtaining a non-quota or visitors visa). The consul was convinced otherwise, and Dr. Naumman received his visa. His success in obtaining a non-quota visa was cause for celebration at the AFSC office, and it seems everyone was a bit worried!

Charlotte wants to learn from his success- how did he change the consul’s mind? His answer: “good relations are the main point.” It seems the president of McPherson, V.F. Schwalm, was good friends with the former governor of Kansas- and a little note from the governor was enough to change the consul’s mind. The expression that occurred to me: “It’s all who you know.”

Dr. Naumann noted that really, there was nothing to learn from his case to help others in convincing consuls- because his case change was really a brilliant stroke of luck. Thanks to some “important” people who took the time to put in a good word, the consul’s mind was changed. You can’t really buy good relations. However, and this is something that I’ve learned to view a little less cynically- the phrase “it’s all who you know” really is a testament to the power of connecting with people outside our comfort zone. I never really warmed up to the idea of networking. In my mind, it was a market for shallow interactions among people who were pushing aside others in an attempt to impress powerful people who can do something for them. I still believe that happens. However, I now see that networking can be a simple joining of the larger human web of support. You are opening up yourself to new experiences, new ideas, new perspectives. When you open up the bridges, you’ll get people who need you and people who can help you. It can be a humbling experience rather than a fight for standing out above the rest.

Dr. Naumann was connected to the previous governor of Kansas because he was a good professor and good man who impressed the president of his college. When you burn bridges, you never know what roads you might be closing off. Now, Dr. Naumann was in a place to be helpful to a new young student coming from Germany. That new young student is my Opa. See how far those bridges can stretch?

Dr. Naumann does mention how easy it was to get into Mexico, so we shall see if that comes up later in the letters. Could Mexico be a gateway for refugees looking to escape Europe?

So go out there- and keep in mind that every person you meet is part of the huge web of human connectedness. Keep those bridges open.
Posted by Sarah Snow at Monday, October 06, 2014

Hi friends- would you like to support my endeavors to put this story into a book? I'm working on it now! YAY! If you believe in this story and me, I have goals to get an editor, agent, and writing coach to help me make it a reality. (Writing a book is more complex than it looks!) If you would like to support my efforts and help me reach my goals, feel free to be my patrons, like a full-fledged Medici! You can support my work these ways: via Venmo: @Sarah-Snow-21, via PayPal: @snowsarah. You can also email me if you have any suggestions or connections to offer! marjorieandtom@gmail.com