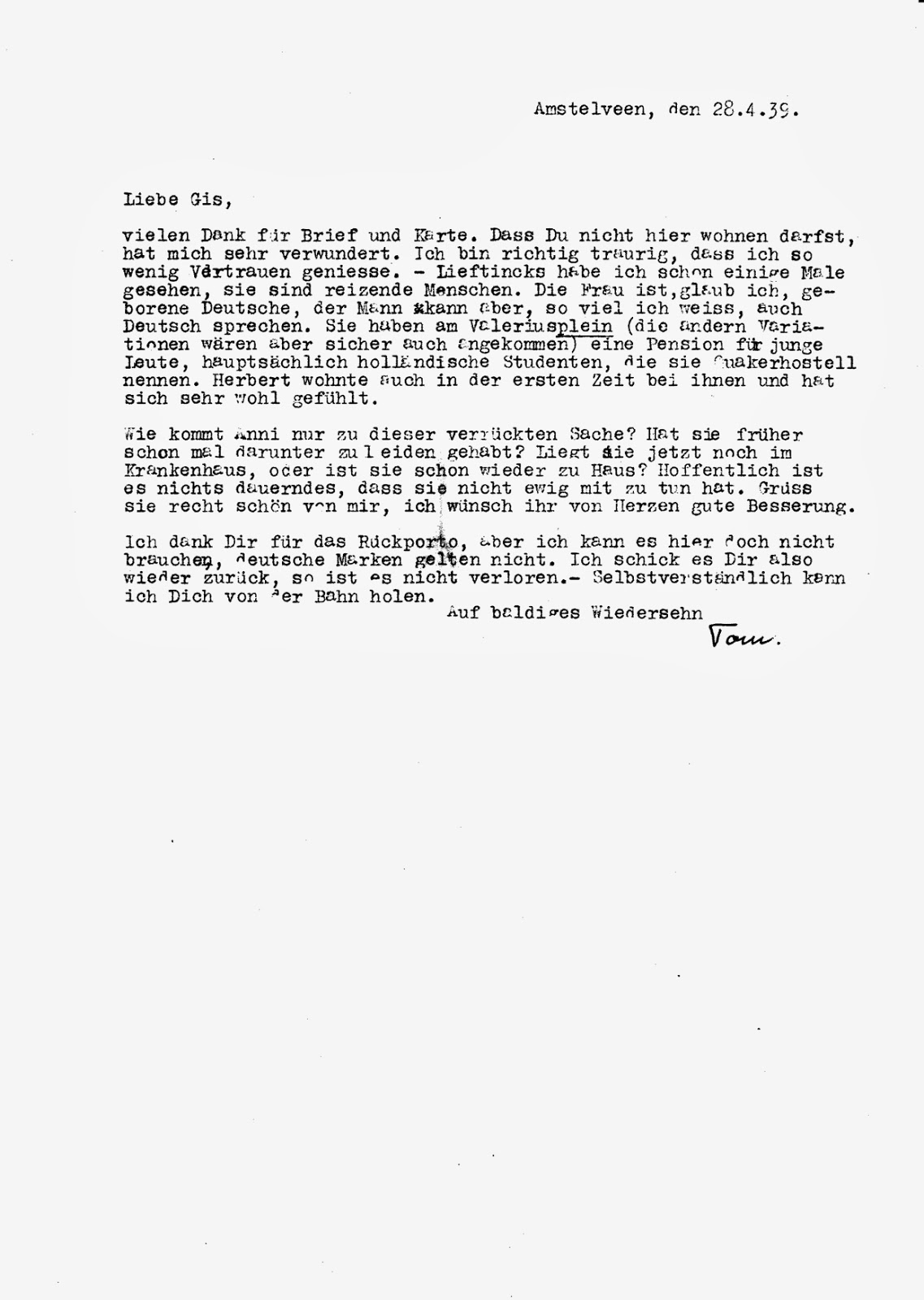 Original Letter from Opa (Tom) to Gisela
Translation by Salome

Dear Gis,
Thank you very much for the letter and postcard. It astonished me very much that you are not allowed to live here. I am truly sad that I don't get much trust. I have seen the Lieftincks already a few times, they are lovely people. The woman is a native German I believe, as far as I know the husband speaks German as well. At Valeriusplein (the other versions would have surely arrived as well), they own a hostel for young people, mostly for students from Holland which they call Quakerhostel. Herbert has lived there with them as well in the beginning and he felt very well there.
How does Anni get into such a crazy thing? Has she been suffering with it before? Is she still in the hospital, or is she at home already? Hopefully it isn't anything permanent, and she doesn't have to deal with it for an eternity. Give her my greetings, and with all my heart I wish her a good recovery.
I thank you for the postage stamps, but I can't use them here, German stamps do not apply here. I am sending them back to you, so they won't be lost. I can pick you up from the station most definitely.
See you soon,
Tom

Hahahahahahaha. I shouldn’t laugh- but Opa’s response to Gisela’s parents’ refusing to give permission for her to stay with Opa while she travels through to England is really funny to me. The translation says “live” but I think in context, it would be better understood as “stay” - as Gisela wasn’t planning to stay permanently in Amsterdam. She was on her way to Great Britain for a time, her parents sent her away for her safety and for her to work. In the last letter from Opa to Gisela, he mentioned that she would be welcome to stay with his family. Apparently, the Halle’s aren’t OK with that. Opa writes “I am truly sad that I don’t get much trust.”

In the Halle’s defense, they likely had not met or at least were not familiar at all with August, Opa’s father. They probably had never seen Emma, his step-mom. And they were probably aware of the awkward situation that was August’s remarriage to Ella’s first cousin. So, as much as they may have liked Opa, they didn’t know August or Emma, and they also understand the dynamics of boys and girls. Ha.

So Opa gives some information on other places that Gisela may be permitted to stay, and moves on. Anni is sick again, and the last time we saw this I had wondered if this was code for something else. Now I’m not sure. He is still weirdly vague about her “illness” and uses strange words to describe her dealing with it “how does Anni get into such a crazy thing? ..Hopefully it isn’t anything permanent, and she doesn’t have to deal with it for an eternity.” Either way, Anni seems to have recurring bouts with whatever this particular illness is. I have just written Anni a letter. If I get a response, maybe I’ll ask her what this illness was- if she even remembers it (it may be so insignificant).

The personal letters sent back and forth refer to including stamps- I wonder if that was a courtesy thing or if stamps were hard to come by? It seems that German stamps don’t work in Amstelveen- so Opa sends them back. I wonder if this is just the norm or if it is a new development as the tensions towards a coming war rises.

So we’re getting closer to Gisela’s visit to Amsterdam, and unfortunately, Opa does not get to play host. But don't worry, there's still a story to be told soon!
Posted by Sarah Snow at Monday, March 17, 2014