If you’ve been following along (or if you’re hopping in) make a quick visit to this letter here. You’ll see August (Opa’s Dad) writing to Werner (Emma’s brother) about checking with Helen D. about getting her boss to help out with Opa’s endeavor to go to school in the USA. Helen Dukas was Albert Einstein’s secretary (pretty awesome). From the letter in February, you get the impression that August is trying whatever he can- but now we have a little more details. The letter for today’s blog post is a follow-up on August’s request. It turns out that Werner did get in touch with Helen Dukas, and it doesn’t seem like it was too hard to get in touch with the great Albert Einstein. Helen writes a note to the Quakers in the American Friends Service Committee asking whether a letter of recommendation from Albert Einstein would be welcomed. 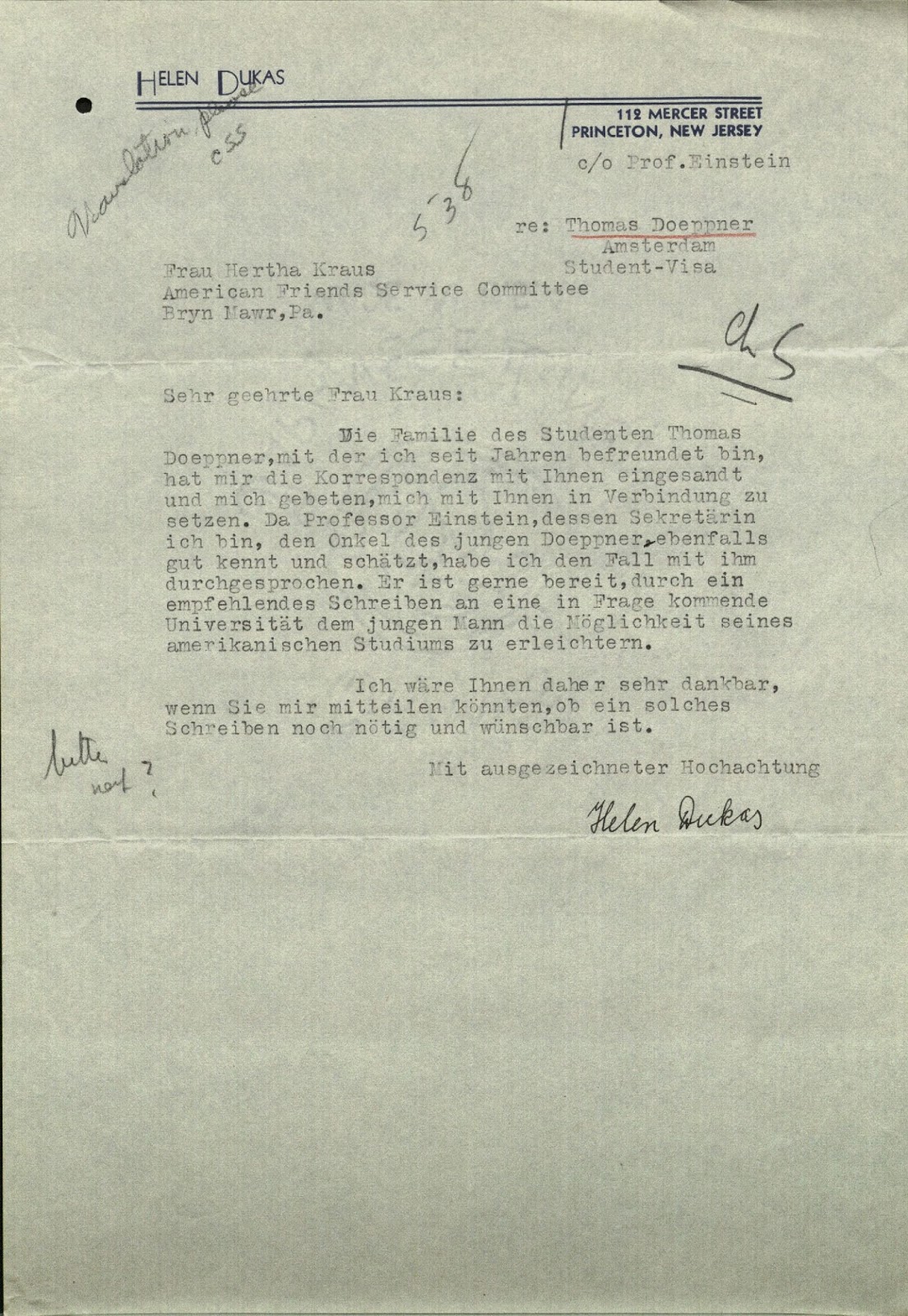 Dear Mrs. Kraus,
The family of student Thomas Doeppner with whom I have been friends with for years, has forwarded the correspondence to me that they had with you, and has asked me to get in touch with you. I have discussed the case with professor Einstein whose secretary I am, and who also very well knows and appreciates the uncle of the young Doeppner. He would gladly write a letter of recommendation to a University in question in order to ease the possibility for him to study in America.

I would be very grateful if you could let me know if such a writing is still wished and needed.

I’m not even sure why this letter exists. Honestly. Let me sum it up for you in my words:


Dear People who can get someone I care about safely out of this mess:


Do you want a recommendation from the smartest person alive?


signed,
But of course you do… I’m just giving you a heads up as to the awesome that is coming.


I may be wrong, but I think Einstein was already a big deal at this point. Of course perhaps Helen Dukas was trying to respect Einstein’s signature - consuming time?


In all seriousness, we really have no idea if a letter of recommendation from Einstein would have been a deal-breaker or not for my Opa. I follow with the camp of “it wouldn’t hurt to try” in most situations. (It’s similar to the “it’s easier to ask for forgiveness than to ask for permission” or something along those lines.)


This letter is cool for normal people (well- I think so), but for my family- this letter proves a legend, solves a mystery, puts together the puzzle. Let me explain. Many families have those “legends” that travel down the generational telephone line. Your great-uncle who played guitar once opened for Elvis Presley before he was a big name. You know- those kind of legends. The kind that have more or less in the way of proof, some obvious blurred details- and an absolute conviction of how cool it is to be related to that person.


In our family, the legend was the Einstein letter. We actually have it (well, my immediate family has a copy of it- my Opa had the original and my uncle- the eldest son- now has it tucked safely somewhere). So we have evidence. The legend was simply told as “Your grandfather had a letter of recommendation from Albert Einstein to help him get into school in the US.” Not until I got a little older did I think to ask the obvious question: How in the world did Opa know Einstein? We assumed it was through August (Opa’s father). The legend was that August knew Einstein’s secretary. This is true- but the story is way better.


As you can see from the letter, Helen seems to be a good family friend of Opa’s family. My uncle remembered hearing that Helen was friends with Ella in school. So ELLA would have been the connection there. Very awesome. But if you keep reading, you see that Einstein has another reason to help out: he knows Opa’s uncle. (Yup- now I have a great-uncle who knew Einstein- boom.) This is when our research opened a treasure trove. The uncle in question is not a brother of August’s or Ella- but rather Emma’s brother Werner… And before you get too confused (you might want to pull out a sheet of paper- and you can use the family tree to the right of this post for help): After August (Opa's dad) divorced Ella (Opa’s mom), he married Emma. Emma is Ella’s first cousin. Werner is Emma’s brother, so Werner is also Ella’s first cousin. Which makes Werner my Opa’s step-uncle and 1st cousin once removed.


Everyone with me? Great. The cool thing about the fact that Emma’s brother was a colleague of Einstein’s- is that Ella’s side of the family was ultimately the connection for Opa to Einstein (both through the secretary and through Werner). So the legend that August was the connection was actually not quite right. It was the women in our family that first connected Opa to Einstein.


And what’s more, Einstein had a legitimate connection to my great-(step)-uncle. There are archives of letters that they wrote back and forth around the time of the formation of Israel. But I’m jumping ahead- way too far ahead.


So this seemingly meaningless letter - has become a real tool in unlocking the mysteries that surrounded my family’s “Einstein legend” - and it has turned out so very legendary. 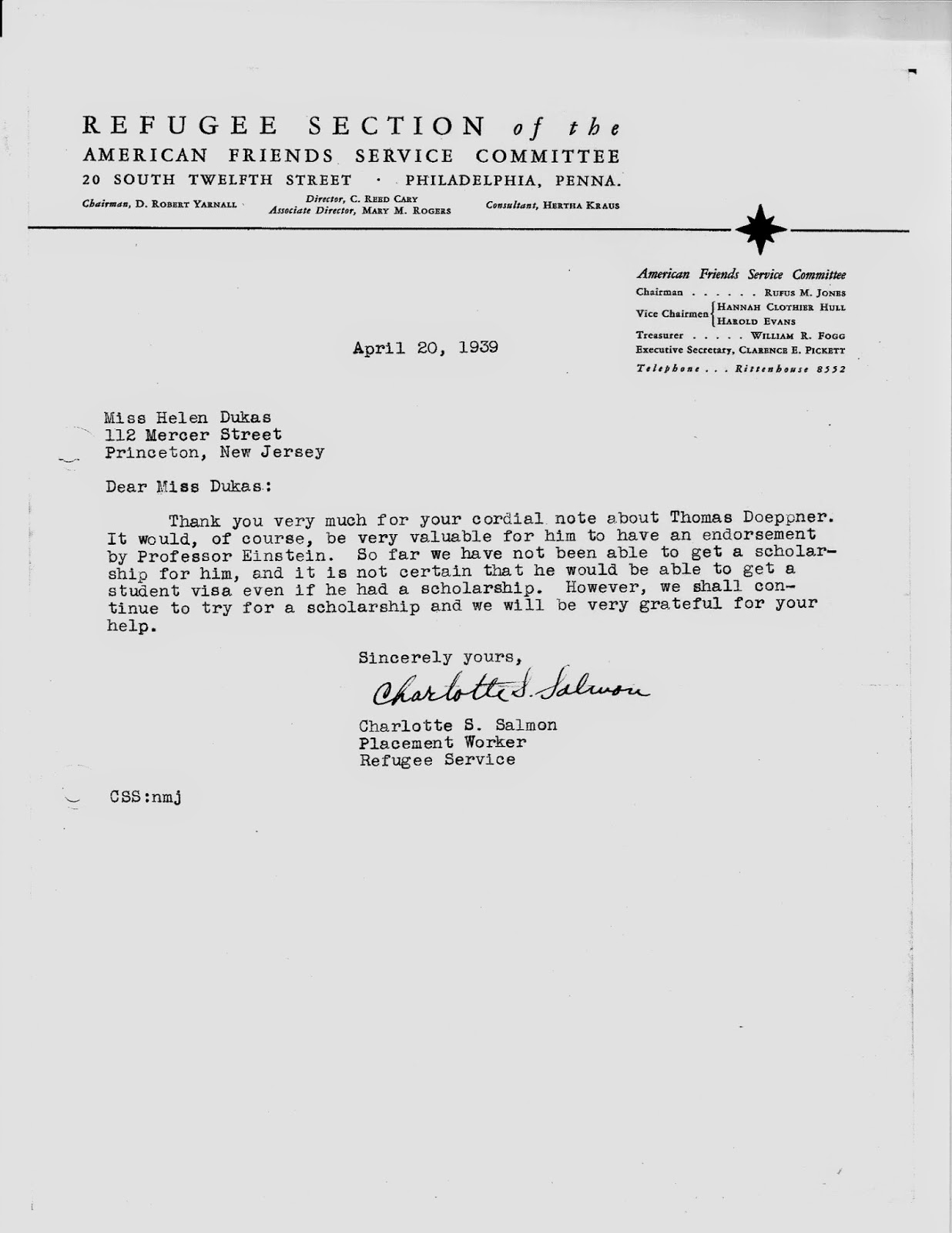 Thank you very much for your cordial note about Thomas Doeppner. It would, of course, be very valuable for him to have an endorsement by Professor Einstein. So far we have not been able to get a scholarship for him, and it is not certain that he would be able to get a student visa even if he had a scholarship. However, we shall continue to try for a scholarship and we will be very grateful for your help.


So here you go, Charlotte Salmon’s response to the question: “Would it help Tom to have a letter of recommendation from Einstein?”

The answer: yes, it wouldn’t hurt. Or in her words “It would, of course, be very valuable for him to have an endorsement by Professor Einstein.” I like how she still is careful to make the point that even a letter from Einstein isn’t a guarantee around the immigration laws, and that Opa may still not be able to obtain a student visa.

It is telling how unsure the whole process is- the folks at AFSC consistently try to keep expectations steady and low. I think if I were Opa in Amsterdam and got a copy of this letter- I’d think- good Lord- I’m never getting to the USA. If a letter from Einstein doesn’t do the trick- what on earth will?

Another random thought/note: April 20th was Hitler’s birthday. I think he was prone to celebrating himself pretty extravagantly on his birthday. I was just imagining this from a bird’s-eye-view… it’s strange to think about a host of followers celebrating Hitler’s birthday with joy while thousands of others are pulling every string, every link, to get as far away as possible from this man.
Posted by Sarah Snow at Monday, March 03, 2014